Maternal-effect genes control early 'Drosophila' development through transcripts or mRNAs found in the unfertilized eggs of females. Learn about maternal-effects genes, including the 'bicoid,' in Drosophila. Updated: 09/02/2021
Create an account

In this lesson, we'll begin to learn how we're lucky enough to be surrounded by such perfect-looking fruit flies. Just like the development of a human being, fruit fly development from eggs into adult flies is no simple task. The precise expression of specific genes is crucial if we want to end up with an adorable baby Drosophila. Remember that there are three classes of genes that are involved in the early development of a fly. We will discuss how these classes of genes are particularly important for pattern formation of the anterior to posterior axis. These include the maternal-effect genes, segmentation genes and homeotic genes.

Once fertilized, these transcripts are translated into proteins that control the expression of some segmentation genes. Maternal-effect mRNAs and proteins are found within the cytoplasm of the egg, or ovum. These proteins can be transcription factors, which regulate transcription of specific segmentation genes, or translational control factors, which control the translation of specific transcripts into proteins. Therefore, these maternal-effect genes set up a concentration gradient that, in turn, helps set up the anterior-posterior axis in the cytoplasm of the egg even before fertilization begins. 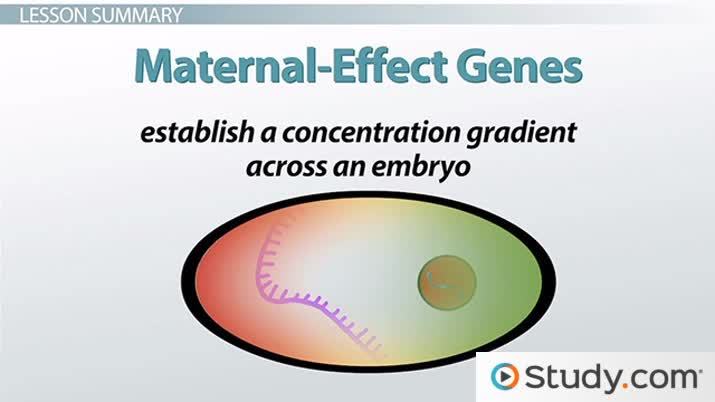 There are several maternal-effect genes that have been discovered. In order to better understand how these genes are important to pattern formation, we'll focus on a specific, well-studied example. Bear in mind, however, that each maternal-effect gene can have different phenotypic consequences and be expressed differently.

Now, let's suppose you had a female fly that was heterozygous for a bicoid gene mutation, and this mutation did not allow for proper anterior formation. Because she was heterozygous for this mutation, that would mean that she carried one wild type bicoid allele and one mutant bicoid allele. Therefore, during oogenesis, or egg formation, approximately half of her eggs would receive the mutant copy of the bicoid gene. If fertilized, these eggs with bicoid mutations would quite literally develop into a bunch of butt-heads. With a defective bicoid mRNA, these mutant flies would never develop an anterior structure and instead would develop two posterior ends. In fact, the gene bicoid literally means 'two-tailed.' This one's a no-brainer. Quite obviously, without a head, this mutation is lethal.

Let's review! In this lesson, we learned about maternal-effect genes, which encode for proteins that establish a concentration gradient across an embryo. These genes code for transcription factors, or translational control proteins, that regulate the expression of other fly development genes. Other classes of Drosophila development genes, such as segmentation and homeotic genes, are expressed later. The transcripts of these maternal-effect genes are localized in the cytoplasm of the unfertilized egg and are translated into proteins after fertilization.

Why are maternal-effect genes important in the development of flies?