View bio
Do you ever get money for your birthday? Do you ever wonder where that money came from and how it was made? Keep reading to learn the answers to these questions and more! Updated: 10/06/2020
Create an account

Who Makes Our Money?

People use money every day, but we rarely take the time to really think about what goes into making the money in our wallets or the people who worked hard to make it. The U.S. Department of Treasury is the government body in charge of the production of money. It oversees two branches that produce the money. The U.S. Mint makes coins, while the U.S. Bureau of Engraving and Printing makes paper money, or dollar bills. Now, let's explore the process of making money, from the design to the distribution. 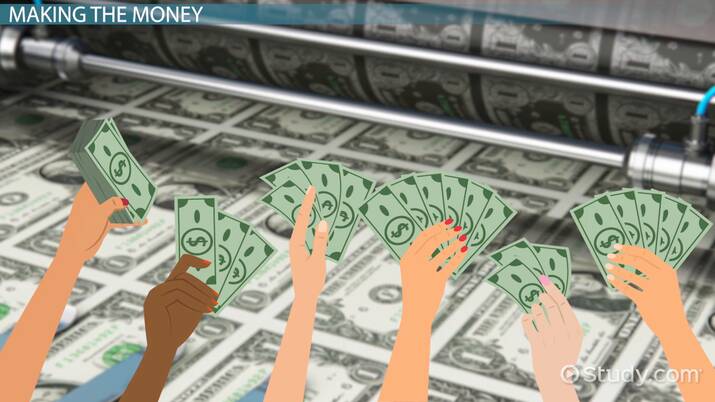 Coming up next: What is the Chinese Multiplication Method?

The U.S. Department of Treasury hires designers who create sketches and models of paper money and coins. After the designers submit their designs, the Secretary of the Treasury chooses one to be made into money, though there may be additional changes to come to a final design.

But why do we need new designs? As technology improves, it becomes easier for people to make their own fake money. The making of fake money is called counterfeiting, which is illegal. To cut down on counterfeiting, the government redesigns our money by adding new features.

If you compare a dollar bill and a piece of computer paper, you'll notice they don't feel the same. That's because paper money is made out of a special blend of cotton and linen that makes it harder to counterfeit. The ink is also specially made by the Bureau of Engraving and Printing. All paper money uses black and green ink, though some of the newer bills (in denominations of $10 and higher) also use metallic or color-shifting ink, which helps prevent counterfeiting.

Our coins are made of metal and alloy. This use of bi-metallic materials not only helps cut down on counterfeiting of coins, but it also reduces the cost of making coins. If a coin were made purely out of metal, it could be worth more than the face value. This might lead people to melt the coins and sell them as metals rather than using them as currency.

After paper money is designed, the design is sent to the Bureau of Engraving and Printing to be engraved onto a plate. The single plate is then reproduced many times onto a much larger plate that can print multiple bills at once. The plate is covered with ink and then pressed onto the paper. Each sheet of bills requires 72 hours to dry per side.

After the coins are designed, the designs are recreated on stamps that press the design onto the bi-metallic material. But first, the coins begin as large sheets of metal. The metal sheets are placed in a machine that punches out blank coins. The blank coins are heated to soften them, and then they're cleaned before being stamped with the design.

After paper bills are printed and dried, the bills are inspected. Any flawed bills are pulled and destroyed. The money that meets the standard is trimmed and packaged for distribution. The coins are also inspected, and those that have flaws are destroyed. But sometimes these flawed coins slip past inspection. When that happens, these rare coins can be worth a lot!

Once the money has gone through the inspection process, it's distributed as needed to banks. The banks then distribute the money to their customers. Now, the money is in circulation!

Prompts About How Money is Made for Kids:

Make a poster, chart, or some other type of graphic organizer that depicts the branches of the US Department of Treasury and what kinds of currency they are in charge of.

Example: The US Mint oversees the making of coins.

Create a poster, chart, or some other type of graphic organizer that details the processes that the Bureau of Engraving and Printing and the US Mint use to make paper money and coins.

Example: Paper money must dry for 72 hours on each side.

Make a list of at least five ways the Department of Treasury tries to prevent counterfeiting. You can refer to the lesson, but try to recall as many ways from memory as you can. At the top of your list, provide the definition of counterfeiting.

In at least three to five sentences, write an essay that describes how and why paper bills and coins are inspected. Also answer the following question: What can happen if a flawed coin sneaks past inspection?

Example: Flawed coins can end up being very valuable.

Example: You could re-design bills that are already in circulation (like the dollar bill or five-dollar bill), or you could create an entirely new type of bill, like a three-dollar bill.

Create an account
How Money is Made: Lesson for Kids
Start today. Try it now
Math / Math for Kids
Math for Kids

How Money is Made: Lesson for Kids
Related Study Materials

History of Money Lesson for Kids

Great Seal of the United States Facts: Lesson for Kids

What Is Tax? - Lesson for Kids