Money has the ability to influence political landscapes and economists would say that the vice versa scenario is also true. Learn more about how political and economic change influences each other's spheres and what those changes can look like. Updated: 11/03/2021
Create an account

Around election time, one of the primary issues that both candidates and voters constantly want to discuss is the economy. Voters want to know what the candidates can do to help the economy, while candidates know that voters care about little else with as much ferocity. In fact, a strong economy could allow a candidate to pass some legislation that would otherwise be impossible for voters to stomach. To many, it seems like political changes influence economics, while economic changes must influence politics. However, as this lesson will show, that is not always the case. 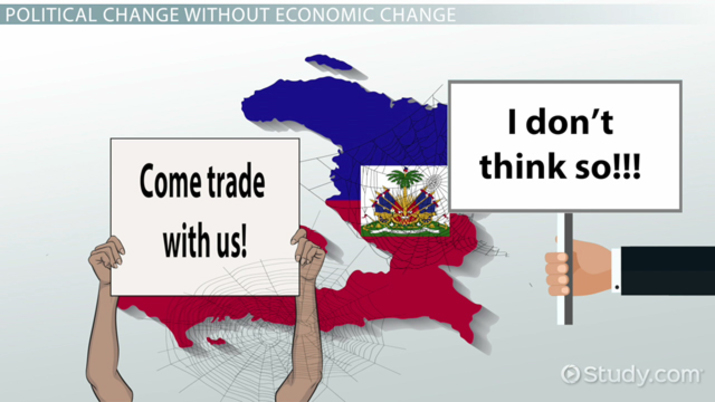 Coming up next: What is Privatization? - Definition & Process

To show how political change can really impact economics, let's go back in time to the early 1990s. All over Eastern Europe and Russia, the old Communist ways were being abandoned. In their place grew a surprising number of businesses, some of which are still around today. In fact, due to this change in government, places like Poland and the Czech Republic went from being puppet states of Moscow to being important members of the European Union, an organization that doesn't make a habit of letting unstable economies join.

We can also look more recently at the collapse of Saddam Hussein's rule in Iraq, specifically in Kurdistan. While the rest of Iraq still suffers from political instability, and therefore achieves relatively little economic growth, the self-governing Kurdish regions are more stable than they have been in decades, and are enjoying monumental economic growth as a result.

They say that 'money talks.' While I hope you wouldn't be so jaded, it can't be ignored that, as people's incomes increase, so too, does their engagement with the political system. For a perfect example, simply look at how voting rights were granted to people throughout the history of England and the United Kingdom. In the beginning, only the King had real authority. However, as the nobles grew in wealth, they demanded a say.

That's why we have the Magna Carta, which essentially limits the powers of the king to the benefit of the nobility. A bit later, as commoners were growing wealthy and buying land, political power was extended to this new aristocracy. And after the Industrial Revolution, when wealth became better measured in bank accounts rather than acres, the right to vote was also extended to factory owners and professionals. Finally, as World War I and the massive industrialization that went along with it caused millions more to join the middle class, so too, did they join the voting class.

Still, economic change does not always guarantee political change will follow. This is especially true if the authorities are committing to keeping political change from happening. For an example of these conditions, we'll return to the Middle East. You may have heard of the wealth of places like Qatar, Abu Dhabi, and Dubai. In fact, people in Dubai are so rich that they are literally dumping sand in the ocean to build resort islands for the sole purpose of conspicuous consumption. If our observations about England held true, you could expect the Arab states of the Persian Gulf, rich off of oil production, to be among the most democratic places on Earth!

Sadly, it is actually the opposite. This is because these places are run as rentier states. Rentier states have governments that buy, or rent, the political rights of the people for economic prosperity. They are literally bribing the citizens to not care about how the government is run. In short, you don't have to worry about anything like money, but the flip side is that you aren't allowed to change anything even if you are worried.

Sadly, there are also examples where political change comes about, and despite the people's best efforts, no economic change to speak of follows. The clearest example of this is a revolution that, despite being modeled on the American Revolution, is largely unknown to many Americans: the Haitian Revolution. In fact, when it's mentioned in books, it often is called the Haitian Slave Revolt, cheapening the amazingness of what these people did. Faced with the brutality of the French sugar plantation system, the slaves revolted, eventually winning freedom for their country against overwhelming odds.

However, despite the best efforts of the leadership, Haiti has remained the poorest country in the Western Hemisphere. This lack of development has been blamed on everything from political corruption to a lack of willingness on the part of European merchants to trade with the newly independent country. In any event, the political change created by the revolution offered woefully little economic change.

However, sometimes the two types of change don't accompany one another. For example, many Arab states of the Persian Gulf are fantastically wealthy, but as rentier states, they buy the consent of their people. Also, while they achieved political change by throwing out the slaveholding French, Haiti has to this day been unable to create the kind of economic life it imagined for itself 200 years ago.

For the most part, political change and economic change go hand in hand. A basic rule of thumb is that the more a country's citizens become wealthier, the more they become engaged with politics. However, there are other factors that may impact this money-and-power relationship, and the opposite can hold true as well.

Explore your ability to complete these actions when you've studied thoroughly:

How Political & Economic Change Influence Each Other
Related Study Materials

What is an Export? - Definition & Example

Diversity Overview & Examples | What is Diversity?

Geopolitics: Foundations & Examples | What are Geopolitics?

Deviant Behavior Overview, Types & Examples | What is Deviance in Society?

Charley in Death of a Salesman: Character Analysis