View bio
Religion can influence the culture of an entire community, nation, or region and how they solve societal dilemmas of morality. Learn more about how religions contribute to cultural changes and their effects on the New World. Updated: 10/20/2021
Create an account

Religion can affect more than a particular person's habits. These beliefs and practices can influence an entire community, nation, or region. Religious practices shape, and are shaped by, the culture around them.

In this lesson, we look at three key examples of religion as a factor in cultural change. We'll focus on the spread of Christianity by the Roman Empire, the impact of Islam in Middle Age Europe, and the role of religion in the founding of the United States. 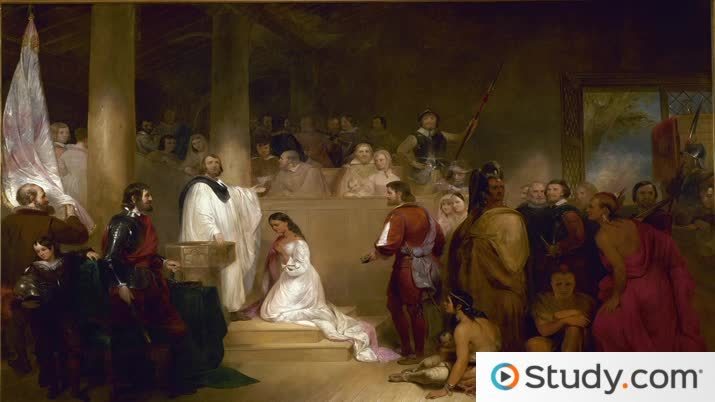 Coming up next: Mystery Cults and the Early Mother Goddess

The Spread of Christianity

In the early Roman Empire, a new religion, Christianity, was at first viewed as threatening or at the very least blasphemous, to the beliefs of the leadership. Easy to blame for troubles in the empire, early Christians experienced persecution, such as penalties for practicing their religion and even being put to death.

This emerging religion that was originally so persecuted would eventually go on to influence the Roman Empire in a big way. In particular, Christianity received a major boost when the Emperor Constantine professed Christian beliefs.

Though he still allowed for pagan traditions during most of his rule, over time his interest in Christianity would impact the spirituality of the empire. For instance, as emperor, Constantine could affect what opportunities were available to practice different faiths. He had the power to create or destroy buildings where people worshiped. The emperor also greatly influenced the degree to which these beliefs were integrated into the government itself.

As a result, the spread of Christianity integrated the Church and the state more than had been previously. While we are used to thinking of a separation between church and state as a critical component of a free society, in the time of the Roman Empire, Christianity became more solidified in the politics of that area of the world.

The Impact of Islam

Even with power more solidified, struggles within the wider belief system of Christianity would make it possible for another religion to have its own major impact on the world.

During the latter part of the first millennium of the Common Era, Islam was growing in influence. Just as Christianity emerged in the Roman Empire, Islam spread throughout regions of Arabia, then North Africa and into parts of Europe and Asia, such as Spain and India.

The influences of Muslim culture include ideas from many disciplines, such as the arts, sciences, medicine, and math. Architecture also experienced shifts as a result of this contact. For instance, some researchers see a connection between the pointed arch from Muslim mosques and the Gothic architecture of that era.

As with Christianity, Islam incorporated some traditions from other religions. It also influenced the politics of the region. As one example of this political impact, you may have heard about conflicts between Sunni and Shia forces today in the Middle East. This division has its roots in the power struggles of the early days of Islam, more than a thousand years ago.

Effects on the New World

Later, in the early days of the American colonies, religion was a driving force for many colonists to risk their lives to travel across an ocean and setup a new life. While there were many reasons for individuals to come to the colonies, for groups like the Puritans, who were escaping persecution, the colonies presented an opportunity to practice their religion in a way that was not possible back home.

Other groups who came to the colonies also had ideas about what it would mean for their religion. By the time of the Declaration of Independence, the concept that religious practices and government should be distinct arenas had taken hold as a principle.

This didn't mean that religious beliefs were completely separated as a result. Monotheism was an established part of the culture and wasn't going away completely in the new government. The belief in one God still played a role in the newly formed nation, just revised and adapted to the culture of the time. For instance, human rights were viewed as given by God to be protected by government. As with early Christianity and Islam, early American leaders borrowed from existing ideas, such as the monotheistic beliefs of the people, at the same time as the political landscape was changing.

Religion can influence the culture of an entire community, nation, or region of the world. This goes beyond a person's individual habits to affect much bigger issues, such as how the government is run and what artistic and scientific advances are made.

For instance, the Emperor Constantine, expressing Christian beliefs, was able to influence the entire Roman Empire. He used his power to affect such issues as the relationship between the Church and state and could even decide the places of worship available to the public.

Europe was also affected by the influence of another religion, Islam, with medical, artistic, and architectural progress from Arabia. Like Christianity, conflicts also arose out of disagreements within the faith.

In the American colonies, monotheism, or the belief in one God, influenced early documents, such as the Declaration of Independence. The new nation would still retain language and traditions related to monotheism even while a major political shift took place. This influence of monotheism on the government of the United States still continues today.

After completing this video, your aim should be to:

Though the founders of the United States called for a separation of church and state, what religious belief within the culture carried over into politics?

In this lesson, you learned about the major impacts that religion can have on society. The following activities will give you the opportunity to research one of three major topics. Depending on your area of interest, choose a topic below and write a detailed essay answering some of the questions given. Be sure to supplement your ideas with additional research and consider your answers carefully. Don't feel like you have to answer every question in a given prompt; on the other hand, choose one or two and build a strong thesis statement.

How the Spread of Religion Changed Developing Civilizations

Religion's Influence on the State

Mourning and Grief: A Cross-Cultural Perspective

Counseling as a Profession: Specialties

Counseling as a Profession: Types of Counselors

Counseling in Colleges and Universities