Having a foreign army around can really change a place's culture. However, the Rus (an early Russian culture) managed to make the best of having the Mongols around, emphasizing those cultural areas that the Mongols didn't care about to ensure that their identity thrived. Updated: 12/23/2021
Create an account

With the arrival of the Mongol Golden Horde in the lands of the Rus, an early Russian culture in the 13th century, much of the material culture of the Rus was destroyed. Cities were burned to the ground, civilians were sold into slavery or murdered, and no doubt was left that the land now belonged to the Mongols.

However, as much as the Mongols were interested in showing the Rus who was in charge, they seemed satisfied to do so from a military and political standpoint only. In fact, the Mongols made no major attempts to culturally subdue the Rus, and actually aided the strongest vessel of Russian culture: religion. 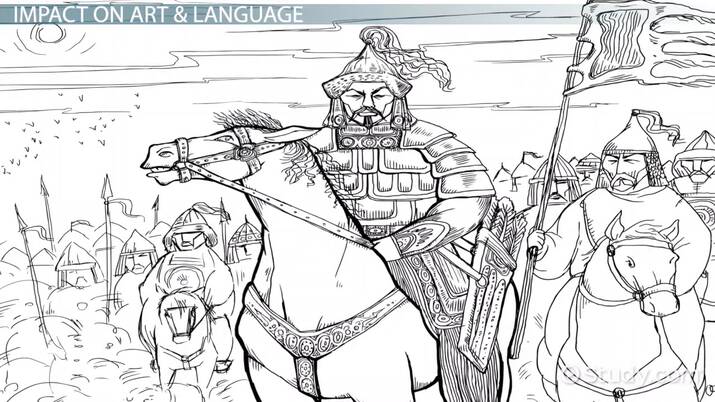 Coming up next: Russian Princes During the 13th & 14th Centuries

Unlike many other conquerors throughout history, the Mongols had no interest in converting their enemies to a new religion. In fact, the Mongols had learned that it was best to largely leave religious authorities alone, as providing access to religion worked well in keeping conquered populations subdued. As such, the Mongols made the Orthodox Church, the main faith of the Rus region, largely immune from any taxes, levies of manpower, or drafts.

Predictably, the power of the church grew dramatically, with more and more people willing to contribute both manpower and economic means to support the church, especially at the expense of giving resources to the Mongols. However, the real amazing thing is that the church became a major source of dissent against the Mongols. Given such independence, it soon allied itself with the rulers of Moscow, the city that had the most potential to destroy the Mongols.

In many ways, Russian culture came into its own during the Mongolian occupation. Eager to set itself off from the Mongols, and flush with the cash to do so, the Orthodox Church sponsored some of the greatest works of Russian art during this period. Many of these decorated the expensive new buildings the Church required, ranging from monasteries to massive new churches.

At the same time, some evidence of the Mongol presence could not help but creep in, albeit only in areas of life far away from the spiritual world of the Church. This was most clearly evidenced in linguistic developments. Mongolian words began to replace Russian terms, especially for ideas associated with a nomadic life or with trade. Due to the cosmopolitan nature of the Golden Horde, many of these terms themselves came from Arabic or Persian.

Equal to the Mongols

As the rulers of Moscow gained the power to eventually overthrow the Mongols during the 15th century, they didn't ignore the most useful innovations of their enemies. After all, the rise of Moscow had largely been permitted because of the fact that the Mongols trusted them to be loyal rulers. Over the course of 200 years, Moscow had proven this assumption wrong, but saw the logic in other Mongol actions.

One of the most important of these was the Yam system of outposts and inns for travelers. Given the exceptional expansion that would define Russia over the next several hundred years, the Yam system, which was a system of quick official communications, would be central to future Russian successes.

All right, let's now take a moment or two to review. Russian culture during the two hundred years of the Mongol Golden Horde occupation in the lands of Rus, which was an early Russian culture, was in many ways shaped by the foreign invaders, but never defined by it.

Central to this was the power granted to the Orthodox Church, or the main faith of the Rus region's people, by the Mongols. The church was able to use this power to great advantage in order to provide a cultural idea of Russianness away from the Mongols. This came not only from religion, but also from heavy patronage of art.

As a result, the Mongols were not able to heavily influence the culture of the Russians, with only words leaking into the language in those aspects of life most closely associated with the invaders, such as trade and farming. However, when the Russians were finally able to overthrow the Mongols in 1480, they still recognized some elements of the genius of their former overlords, most principally in the Yam system, which was a system of outposts designed for quick official communications.

The Rise of the Russian Empire

Mongolians and Their Contributions to Western Civilization

The Emergence of Three Empires in Eurasia: Ottoman, Safavid & Mughal

Women in the Qing Dynasty

The Spread of Buddhism in Tang China

The Rise of the Turks & Their Impact on Islam