The urinary system that eliminates waste from the body assists in maintaining homeostasis, specifically relating to blood. Identify how the urinary system regulates the volume and composition of blood, and its relationship to hormones as well. Updated: 11/29/2021
Create an account

Imagine a man-made reservoir fed by a small river and drained by a man-made dam. This reservoir provides drinking water for nearby communities, but also serves as a source of recreation with a thriving community around it. Throughout the year, the reservoir management office wants to keep the water at a relatively constant level. Not letting it get too high to where it spills over its banks, but not too low so that there isn't a sufficient supply of drinking water. 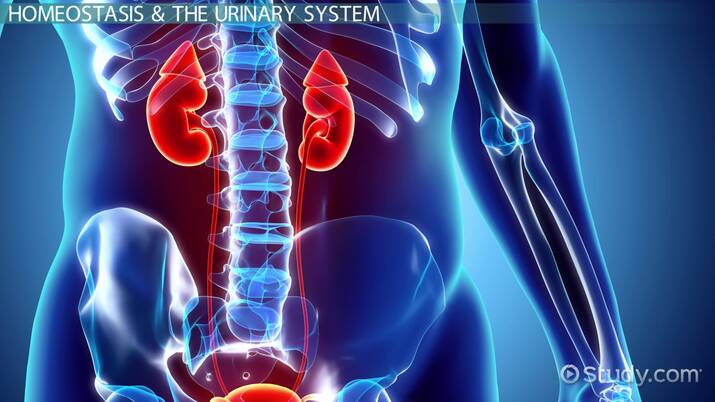 Within the urinary system the key players are the kidneys (there are two of those) where the bloodstream and the urinary system meet. The kidneys contain millions of tiny tubes called nephrons where the blood is filtered. The good stuff (like nutrients) is reabsorbed back into the body, waste is secreted, and water can be secreted or reabsorbed depending on conditions within the body.

The fluid produced by the nephrons is urine. The urine is collected into two tubes called the ureters that lead to the bladder. The bladder is the storage compartment for the urine. The last part of the urinary system is the urethra, which is a single tube that leads directly from the bladder to the outside of the body.

When we think about how the human body works, frequently we invoke the idea of homeostasis. Homeostasis is when the body constantly regulates a variable (like blood pressure, temperature, etc.) to keep it close to a specific set point. When a homeostatic variable changes (gets too high or too low) the body will kick in mechanisms to reverse the change and get back to the set point.

In our reservoir example, the management team worked to keep the level of water in the reservoir constant despite fluctuations in rainfall. The urinary system influences homeostasis by regulating the amount (volume) and the makeup (composition) of blood.

The makeup of blood is regulated in a couple ways. The kidneys act to filter out metabolic wastes, like urea, that are picked up by the bloodstream. The kidneys prevent the buildup of this waste by removing it from the body. The kidneys also help keep the pH of the blood right where it's supposed to be, which is about 7.4. They do this by controlling the rate of removal of hydrogen ions (H+), which are responsible for the acidity of fluids.

The regulation of blood volume is where our reservoir analogy really comes into play. On a daily basis, your body maintains fluid balance, where fluid intake approximately equals fluid loss. Your diet is the major source of fluid input, and the urinary system is the major route for fluid loss.

Fluid balance is an example of homeostasis and many systems in the body influence fluid balance. The kidneys can respond to changes in fluid balance by increasing or decreasing the amount of water in the urine. You experience this relationship in a very direct way.

When you're sufficiently hydrated, excess fluid is directed to your urine so the volume is higher, and you can see that it's more dilute (meaning that it's a lighter color). When your fluid intake is lower, the body retains water, your urine volume decreases, and the urine is a darker color. But how do the kidneys know whether to keep water or excrete water? In our reservoir example there was a management office that controlled the opening and closing of our dam. In the human body, this control comes in the form of hormones.

Hormones are chemical messengers that circulate in the bloodstream and can interact with specific cells to change their activity. Hormones allow bodywide chemical communication. An organ can produce a hormone and release it into the bloodstream to directly influence cell and organ activity.

In our reservoir analogy, the management office is like the hormones. The dam can't open or close itself; the office has to make a decision about how to control the dam. Let's take a look at how some different hormones influence fluid balance and how that directly relates to the urinary system.

Antidiuretic hormone (ADH) is produced by the brain to increase the amount of water reabsorbed by the kidneys. If you're familiar with the term diuretic, something that increases urine output, then an antidiuretic is something that decreases urine output. The brain is constantly monitoring the level of electrolytes in the bloodstream, blood volume, and blood pressure. When the level of electrolytes increases or blood volume decreases, the brain produces antidiuretic hormone. This triggers the kidneys to retain water, which will increase blood volume, decrease (dilute) electrolytes, and result in more concentrated urine.

When blood pressure falls too low, the kidneys are no longer able to achieve optimal blood filtration. In this case, the kidneys, liver, and lungs work together to make a hormone called angiotensin II. One of the effects of angiotensin II is to trigger the production of aldosterone, a hormone that triggers the kidneys to retain sodium and water. When sodium and water are retained, this increases blood volume and blood pressure in the whole body and allows the kidneys to filter blood at the optimal rate.

Our final example is natriuretic peptides, hormones produced by the heart that trigger the kidneys to excrete excess sodium and water. When blood volume gets too high the walls of the heart are overly stretched, this triggers the release of the natriuretic peptides that target the kidney. This causes the kidney's cells to excrete more sodium and water resulting in more urine production and a decrease in blood volume and pressure.

You might note that the overall effect of the natriuretic peptides is the opposite of the overall effects of antidiuretic hormone and aldosterone. So the body has responses that can control the kidneys in multiple ways. This would be like the reservoir management office deciding that rainfall is exceeding the capacity of the dam and opening the gates or flow, but on a different day during a drought, they might decide to close down the gates to retain water for future use.

All right, let's take a moment or two to review. In this lesson, we learned that the urinary sytem, specifically the kidneys, is responsible for regulating the composition and volume of blood. We learned that it's made up of several different components, including

This is an example of homeostasis, or when the body constantly regulates a variable to keep it close to a specific set point, and is achieved in a variety of ways, including through the hormonal control of kidney activity. With regards to fluid balance, when blood volume gets too low or blood electrolytes get too concentrated, the kidneys can retain water, thereby decreasing urine output.

When blood volume or pressure is too high, the kidneys can excrete more water, thereby increasing urine output, which is partly accomplished by the release of antidiuretic hormone (ADH), which is produced by the brain to increase the amount of water reabsorbed by the kidneys, with hormones being chemical messengers that circulate in the bloodstream and can interact with specific cells to change their activity.

What Is Dysplasia? - Definition, Symptoms & Treatment