Monomials are single terms with a coefficient multiplied with variables. Learn more about monomials and how only like terms can be added or subtracted. Then, learn about adding and subtracting monomials. Updated: 11/09/2021
Create an account

In this lesson, we will talk about working with monomials. Monomials are single terms consisting of a coefficient multiplied with variables. Your coefficient is the number that is multiplied by a variable, and your variable is a letter representing an unknown value.

It is also possible for your variables to have exponents. 8x^2, for example, is a monomial where 8 is the coefficient and the x^2 is the variable x with an exponent of 2. The exponent tells you how many you have of the variable. So x^2 tells you that you have 2 x's. If your monomial only has variables, such as in x, then your coefficient is automatically a 1. 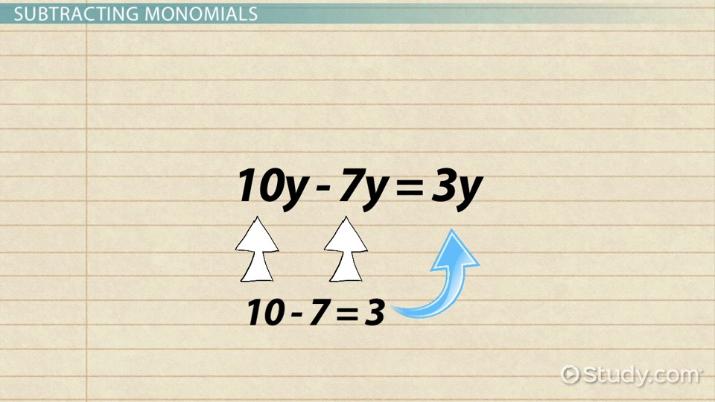 Try it now
Back
Coming up next: How to Multiply & Divide Monomials

Now, let's see about adding monomials together. Let's say you are given the problem 4x + 9x. The first thing you need to do is to check to see if your monomials are like terms. You ask yourself, are the variables exactly the same?

If you are given a problem where you don't have like terms, you will leave the terms that are not alike alone. For example, if your problem involved adding several monomials together as in 2xy + 5xy + 6y, you again first look to see if you have like terms. You see that the 2xy and the 5xy are like terms so that means you can add those two together.

You remember that you leave the variables alone and add the coefficients. You add 2 + 5 = 7; that means 2xy + 5xy = 7xy. But you still have the 6y. What do you do with this one? Because this is not a like term, you can't do anything with it. So, you leave it as it is and your complete answer is 2xy + 5xy + 6y = 7xy + 6y. You have added the like terms and everything else is left alone and included in the answer.

So 10y - 7y becomes 3y. We have subtracted the coefficients 10 - 7 = 3, and we have left the variable the same. We were able to subtract these monomials because they are like terms.

However, if we had 8x - 8y, our answer would be 8x - 8y because there are no like terms that we can subtract. We need to include all the terms that are not alike in our answer.

If you are given a problem that includes both addition and subtraction, you do the same. You look for like terms that you can add or subtract. You leave the variables alone and you add or subtract the coefficients.

Let's review what we've learned now. Monomials are single terms consisting of a coefficient multiplied with variables. Your coefficient is the number that is multiplied by a variable, and your variable is a letter representing an unknown value.

By studying and completing the practice exercises in this lesson, you can prepare to:

Monomial Examples & Factors | What is a Monomial?

Binomial Expression & Examples | What is a Binomial?

Power Of A Quotient: Property & Rule

Scale Factor of a Dilation | Center of Dilation & Examples

How Systems Use Inputs & Outputs

The Impact of European Exploration & Colonization on Canada

Zero Exponent Rule Properties & Examples | What is the Power of 0?