What Is a Scale Map?

A long time ago there was a princess, and she decided that she wanted a new bed. So, she hired the best carpenter in the land to construct it for her. This princess was very particular, so she measured out the size of the bed herself, using her feet. She told the carpenter that the bed should be 30 steps long and 20 steps wide.

But when the new bed arrived it was humongous! Much bigger than the princess wanted. Can you figure out why? The carpenter's feet were much larger than those of the princess, so when he made a bed that was 30 x 20 steps, he used his own feet to measure, which made for a bed that was the wrong size.

This silly story helps us understand the important concept of scale, which is just a ratio of two numbers. In our story, it would be the ratio of the princess' feet to the carpenter's feet. More useful to us is a scale map, which is just a map with a scale. And, that scale tells you pretty much the same thing: how to relate what you see on the map to the real world that the map is portraying. 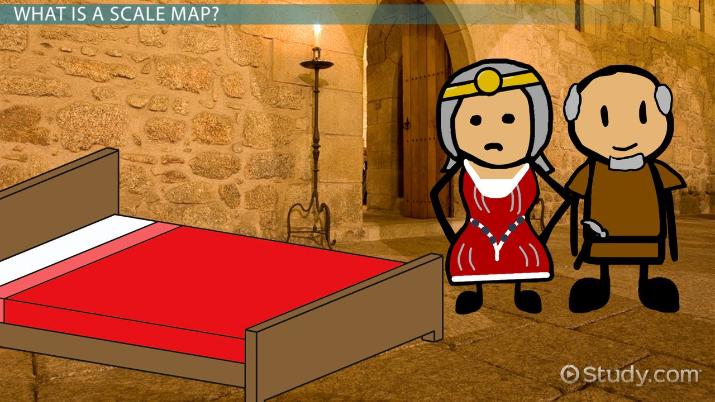 Coming up next: The Interrelationships Between STEM & Society

You might be thinking that almost every map you've seen has a scale on it. While this is technically true, the scale you've seen on most maps is a bar scale. This simply shows a scaled distance on the map, telling you how far a certain distance is. For example, one inch might equal one mile, or 10,000 feet. So while the distance is scaled, it's not quite the same as a scale map.

The scale you'll see on a map will be a ratio, which will look like this: 1:250,000. This reads 1 to 250,000, and it is basically saying that on that map, 1 of something equals 250,000 of it in the actual real-world location the map is portraying. So instead of saying that 1 inch equals a mile, this type of scale is telling you that 1 of whatever you are using to measure on the map would take 250,000 to make the actual distance in the real world.

Have I lost you yet? Let's look at an example to see if it clears things up a bit. The bar scale tells you the exact distances, while a ratio scale can use anything to measure the distance between two points. The fun part is that we're not limited to miles, kilometers, or feet; we can use whatever we want!

But, here's where the fun comes in. What if you wanted to measure the distance between our houses with something a little less typical, like a spoon? You can totally do this on a scale map! By chance, the distance between our houses is exactly one spoon long. This means that in real life, our houses are separated by a distance of 10,000 spoons. Prefer forks or knives? How about measuring with a pen or pencil? Maybe you prefer to measure with pinecones, beetles, or chopsticks. The possibilities are endless with a scale map! The only rule is that you have to stick with the same unit of measure the entire time. You can't go from spoon to fork halfway through, or even change the size of your spoon. It just doesn't work like that.

Again, you can use any type of measurement you want for the ground distance, but for practicality it's usually easier to use feet, miles, or something else like that instead of spoons, chopsticks, or pinecones. But hey, if you want to go out and measure with utensils, be my guest! Just be aware that it may take you a while.

Ok, another quick example to show how this process works. Let's say you've found your map and the two points you want to use as references. You've measured the distance between them to be 14,500 feet. The distance between them on the map is 2 inches, but we can't divide just yet because our units aren't the same. Just like you can't divide spoons by knives, you will first need to convert one or the other to make both the same. Here, we'll just switch 14,500 feet to inches, and since there are 12 inches in each foot we get 174,000 inches. Wow, that's a lot of inches! Ok, now we're all set to get our ratio. 174,000 inches divided by 2 inches gives us 87,000, and since both units are inches they cancel out and we're left with a unit-less ratio of 1:87,000.

Again, this tells us how many of whatever we're using to measure on the map we would need in real life to go the same distance on the ground. 1:87,000 is a relationship, meaning that for 1 on the map you'll need 87,000 in real life. Remember, this scale does not refer to inches, feet, or any specific unit of measure, just that relationship between whatever you're using. Feel free to test this out, but if you're using spoons you might need to stock up on your cutlery first!

Scale maps are fun and easy to use. They employ a scale, or a ratio of two numbers. This ratio can be seen as a relationship between the two numbers, and it tells you how a distance on the map relates to a distance in real life.

For example, if your ratio is 1:50,000, then 1 of whatever you're using to measure on the map relates to 50,000 of the same thing in real life. Be it inches, thumbs, feet, pens, or staplers, as long as you use the same 'unit' of measure you can determine how many you would need to get from Point A to Point B on the ground.

Creating a scale map is just as much fun as reading one! All you need to do is find a map, find the actual ground distance between two points, find the map distance between the same two points, and then divide the former by the latter to get your ratio. Stick that scale on the map to let everyone else know what you're up and you're done! Because the ratio is unit-less, it allows you to measure with whatever your heart desires - both on paper and on the ground.