Text structures are identifiable patterns in the organization of text in a written work. This lesson will discuss the use of transitions to determine text structure. We will end with a very short quiz to see what you have learned.
Create an account

Think about the last thing you read. Was it a newspaper? Or maybe even a text message? Depending on what you read, the text structure was likely very different. Text structure is the pattern of organization within a passage. Text structure helps to convey the message of the author. For example, if you read a newspaper article, the author's purpose was probably to inform you of something. Therefore, his or her text structure would be designed to do just that.

For instance, if you were reading about an event, the author might present ideas in chronological order according to when they took place. This organization of the material supports the author's purpose of providing information. 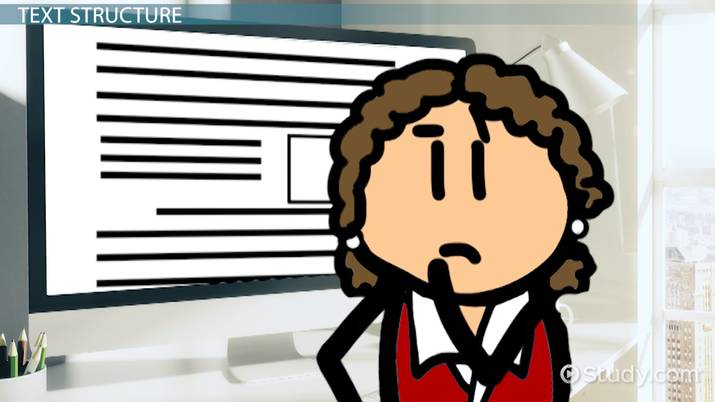 Coming up next: Evaluating Rhetorical Devices in Writing

Earlier in this lesson, we discussed a newspaper article that was designed to inform us of an event. This type of article would probably use a lot of transition words that refer to time or order of events, such as first, before, after, or as a result of because they indicate a point in time. For example, in describing the arrival of an important figure in the news, the author might begin by stating that first the arena was prepared before the speaker arrived. These transition words give readers clues that the text structure of the article is about a sequence of events.

Certain words are often used to signal the reader that the text is about comparing or contrasting various subjects. If an author wants to show how things or ideas are alike, he or she might rely on transitions such as also, as well, similarly, and likewise. For example, if comparing two schools, an author might say that one school also has a football team like school two. Conversely, transitions like otherwise, on the other hand, and opposite can be used to demonstrate differences between concepts or ideas.

Cause and Effect, Descriptive

Passages that focus on cause and effect might utilize transitions like as a result, consequently, or because. An example of text structure reflecting these types of transition words is an article discussing the effectiveness of a medication in which the authors might say that rates of illness declined as a result of use of the new medication.

Descriptive passages often use transitions such as above, next to, on top of, beside, to the left of, or to the right of. More specifically, a passage designed to describe a tourist area might say the ticket booth is beside the train station. Again, the transitions selected by the author work to connect the content and support the overall purpose of the passage.

The text structure of a passage is the internal pattern of organization of the piece. Text structure helps to support the author's purpose in writing. Transitions are words or phrases that show how things are connected and can be very helpful in determining text structure. Transition words can give readers clues about text structure, such as with the order of events, comparisons, contrasts, cause and effect, and descriptive passages.

Identifying the Organization in a Reading Selection

How to Identify & Analyze Text Structure

Identifying the Structure of a Text

Analyzing Structure in an Informational Text

How to Find Cause and Effect in a Reading Selection

Point of View of Characters vs. the Reader

Using the 5 Ws to Find Details in a Passage

How to Analyze Two Texts Related by Theme or Topic

How to Compare & Contrast Ideas in a Reading Selection