Diagrams help visual learners understand information. Learn how to draw appropriate diagrams for scientific processes and concepts. Understand why diagrams are useful, and review the items that need attention in a diagram, including clarity and detail. Updated: 11/04/2021
Create an account

Have you ever heard the phrase 'a picture is worth a thousand words'? If you've ever played a party game that requires you to draw clues while your friends guess, you immediately see the value of having someone capable of drawing something that is clear and easy to understand, as a way to communicate an otherwise difficult idea. In science, we very often have to use diagrams in order to make our points clear. Otherwise, we may lose the focus of the person reading our research. After all, wouldn't you rather just say, 'look at Figure 1', than have to describe whatever Figure 1 is? In this lesson, we're going to look at the value of being able to produce diagrams to help aid scientific understanding. However, it's not as easy as drawing a stick figure. As we will see, it requires a proper balance of attention to detail and clarity, while not going overboard with it either. 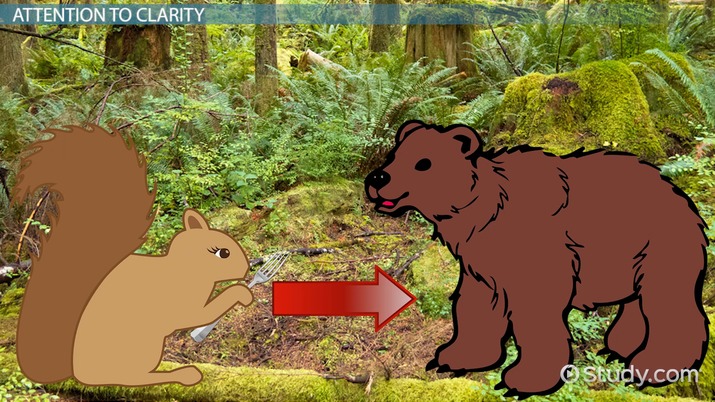 Imagine that you are looking at a model of how a rocket engine works. Hoses lead from the fuel and oxygen tanks to a combustion section. If you were to look that up in a textbook or online, you'd see the picture is pretty similar to the one that we provided in this video. It's pretty straightforward. This is because attention to clarity is one of the most important parts of being able to use images and diagrams effectively. You should not be left scratching your head trying to figure out a diagram. This is also why images of cycles, like a life cycle or a food change in a given ecosystem, often have arrows showing the way that you should move along in your understanding. After all, a squirrel does not eat a bear.

Okay, so making sure that an image is clear and easy to understand is vital, but sometimes you've got to have a surprising level of detail. Think about DNA for example. If you're showing how a particular section of DNA would replicate itself to allow for new cells and therefore new life, you wouldn't just want the stick figure equivalent of DNA. Instead you want something that showed how each protein within DNA was transformed into a new strand. In case you're not familiar with the process, DNA links up with a chain called MRA, which then links with TRNA. Finally, TRNA tells the amino acids that will make the new cell the order to get into and is essentially a mirror image of DNA, in that it wouldn't just do for you to have some box that DNA goes into one side and amino acids come out of the other. Instead, for a diagram to be useful, you'd want to see the chains of each linking up with each other with enough detail to understand the processes at work.

Too Much of a Good Thing Is a Bad Thing

Still, sometimes too much simplification or too much detail is a bad thing. Let's take a look at each of the examples we've given so far to see how it would cause misunderstanding and possibly even mistakes. First, let's look at the rocket ship and too much simplification. As you can imagine, there are thousands of parts to a rocket, but we reduced it down to the essentials. However, you can still roughly figure out how it works from that. However, if we were to remove the hoses, it would be a more simple figure, but we'd suddenly lose understanding of how the whole thing worked. The opposite can be done for DNA. Often you'll see each part of the genetic code represented by a letter, often A, C, G, T or U. Those each refer to a specific molecule. Now imagine that instead of those letters, we had copies of the molecules in question. All of those bonds on paper would have to be really small in order to make them fit, or else the diagram would be so massive it would be useless in a textbook.

In this lesson, we looked at the importance of being able to produce useful diagrams for scientific purposes. We started by looking at the advantages of diagrams, especially focusing on how, if done in a clear manner, they allowed us to make sense of something as complex as a rocket. Meanwhile, they still have to have enough information to allow us to learn something. We saw how this was necessary by looking at the transmission of genetic material via DNA. Finally, we looked at how to avoid using too little or too much detail in order to make our work even easier to understand.