Every student should evaluate their college options, but it can be overwhelming since there are a variety of factors to look at when deciding on a college. A few key factors to look at are the location of the school, the majors that are offered, and financial aid availability for the college. Examine the options by ranking your competing priorities and narrowing the list from there. Updated: 10/01/2021
Create an account

Zoe is getting ready to apply for colleges, but she's feeling very overwhelmed. There are so many colleges out there! How could she ever figure out which ones to apply to?

There are many ways to evaluate a college. You'll look at whether it is small or large, home or away, private or public, in an urban or rural setting, 2-year or 4-year, the financial aid package, the majors that it offers and the list goes on.

Zoe knows which types of schools she prefers: small, private, a couple of hours away from home and in a rural area. She prefers 4-year institutions to 2-year institutions, and she needs a lot of financial aid because her parents aren't able to pay for her college. Further, she wants to be an environmental science major, so that needs to be an option for her at the college she chooses.

Not very many colleges (if any) will fit Zoe's criteria. Maybe there's a public college near her town, but the only private college is more than a couple of hours away. Maybe there's a college that meets all of her criteria but doesn't offer an environmental science major.

How can Zoe sort through all her options to choose the best colleges for her to apply to? Let's look closer at how to deal with competing priorities and how to narrow the list of potential schools. 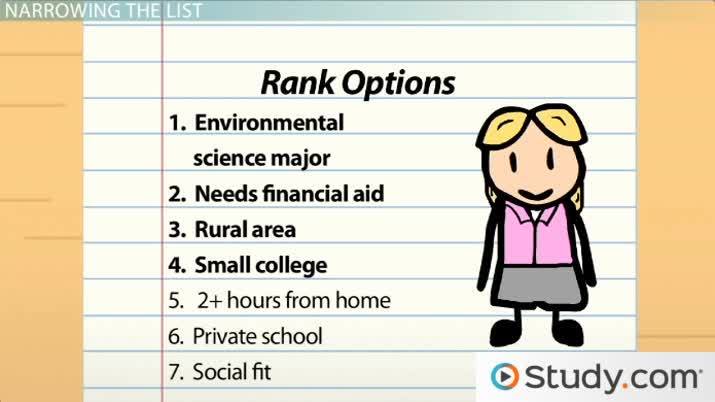 Try it now
Back
Coming up next: How to Research and Compare Schools Without a College Visit

So, Zoe has many different elements that make her dream college. But what happens when a school meets some of her priorities but not others? How can she deal with competing priorities? For example, remember that Zoe has a specific type of college that she's looking for: small, private, a couple of hours away from home and in a rural area. She's found a college that meets all of those priorities. Great! Her work is done, right?

On the other hand, let's say that Zoe finds a school with an environmental science major that's willing to offer her lots of scholarships. But it's a big public university that's three states away in the middle of a big city. What should she do?

The way she ranks her priorities will depend on her personal situation. If money is no object, perhaps financial aid won't be very important to her. Or if she thinks she wants to be an environmental science major but isn't sure, perhaps the fact that a school offers that major isn't as important as other considerations. But whatever her personal situation is, she should come up with a list of which priority is most important, which is second and so on until she reaches the bottom of the list.

Let's say that Zoe has ranked her options. She knows that offering an environmental science major is the most important thing to her, followed by financial aid and then a rural location. But now what does she do? How does she go from having this list of priorities to applying only to a few of the hundreds of colleges available to her?

Once she has a ranked list of priorities, there are several steps that Zoe can take to narrow her college options:

1. Figure out which options don't matter.

When Zoe looks at her priority list, she realizes that though there are seven or eight priorities on that list, only four really matter to her: environmental science major, financial aid, rural location and small. Beyond that, the other items on the list, like whether the school is private or public, aren't that important to her.

2. Make a ranked list of schools for each priority that matters.

Of course, Zoe will be looking at more than three schools, so her list will be longer. And she'll want to do this for each of the four lists. In the end, she'll have four lists that include all of the colleges that she's considering.

3. Find the schools near the top of most lists.

It's very rare that a school will be number one on every list. For example, perhaps a school with a very good environmental science major isn't as small as some of the other schools. In that case, it might be ranked number one on the list of the major but ranked four or five on the list regarding the size of that college.

Zoe will want to look for patterns, though, and often students find that there are three or four colleges that consistently rank near the top of most lists. A school might be number one on this list, number four on that list, number two on another list and so on. But the point is that, chances are, Zoe will find several colleges that are near the top of most or all of her lists. That's great! Those schools are the ones she should apply to.

Evaluating a college can be done by looking at many different options, like home or away, urban or rural, big or small, 2-year or 4-year, private or public, financial aid and major offerings. In order to deal with competing priorities, a student should rank the different options, paying attention to what's most important, rank colleges on the options that are most important, and then find patterns to see which colleges consistently rank high on the priorities of the student.

When this lesson is over, you should be able to discuss the major aspects to consider when evaluating whether to attend a college and how to arrive at a decision.

How to Evaluate Your College Options
Related Study Materials