Copyright
Lesson Transcript
Instructor: Lydia Neptune
You can use the CLEP calculator Solver mode to calculate unknowns in an equation. Learn more about the CLEP scientific calculator, how many or what kind of equations it can solve and more about solver mode. Updated: 10/24/2021
Create an account

Let's enter the equation cos(x*pi) = x^3 - 2*x. So what I've done here is I've used, explicitly, the star where I'm multiplying, and this caret where I'm taking something to a power. Here I'm taking x to the third power, so x cubed. As soon as you type this in, the CLEP calculator comes up with all of the possible variables that you've used in this equation. In this case, it recognizes that pi isn't a variable; it's a known quantity. It's 3.1415…yadda yadda yadda. But it does recognize that x is an unknown, so it puts x down here, under 'Name'. It gives x a value of 0 at first, although, this value won't always be 0. If you click on the 'Solve' button, it will solve this equation for one of the solutions of x. It will do that within some lower limit and some upper limit.

If you know what the value of x is, you can plug it into this field here, where it says 'Value'. This is helpful if instead of just an equation with x in it, you also have y. So say you have two unknowns in one equation, and then you decide to set one of those unknowns (one of those variables). Say you set what x is, then you can solve for y.

So let's solve for x. According to the CLEP calculator, a value of x of -0.617 satisfies this equation. But hang on - is that in radians, or is that in degrees? I have cos(x*pi). Do I want it to calculate the cosine in radians or degrees? Let's click 'Done' and find out if we are actually using radians or degrees. Oh, degrees. Let's change that to radians and go back to my Solver.

Let's put my equation back in, cos(x*pi) = x^3 - 2*x. Now let's solve for x. Apparently one solution is x = -0.30. But what I could do is actually put a guess in for the value of x. Let's say there are multiple solutions - one is less than 0 and one is close to 1.5. If it gives me one of the solutions that I don't want, say, the one that is less than 0, I might want to give it a guess. That's this 'Enter a guess for the value of the unknown'. I'll give it a guess that's much closer to the value that I'm interested in. 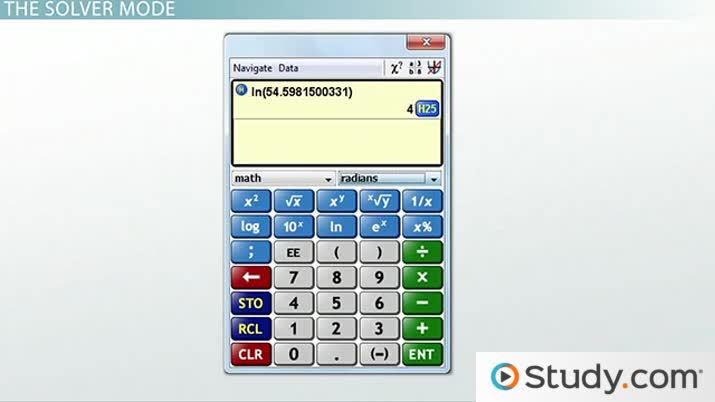 Coming up next: How to Solve Equations by Graphing on the CLEP Scientific Calculator

You can use the Solver to solve any of these equations for an unknown variable. Let's say that you forget, though, how to type in one of these functions, like cosine or x to the something power. If you click on the f(x) button down at the bottom, it will come up with a list of all possible equations, like x^2, or absolute value, or sin(x). You can select any of these and it will put that function into your Solver. Then you can just enter the value in. Say you want to solve cos(x), you can just put x in where it says 'Value '. So let's say cos(2x) = the square root of x. The value of x that satisfies this equation, or at least one value, is 0.43 (roughly).

Let's review some of the hints from this lesson. In the CLEP calculator, you're going to want to use the Solver to calculate unknowns in an equation. That equation can be implicit or explicit, but any time you use the Solver, it's only going to calculate one solution that is closest to the guess that you give it. So if there are multiple solutions, you have to pick a guess that is closer to the solution that you want.

Second, be sure to always check if you're in radians or degrees if you're using trigonometric functions.