This lesson provides examples of words that can be used to indicate the different parts of an argument. You will also learn when these clues can steer you wrong and how to avoid this trap.
Create an account

When you think of the word 'argument,' you probably imagine two people yelling at one another or having some sort of a fight. However, when we're discussing critical thinking, an argument is a term used to describe something that can be far less dramatic than that. An argument, in this context, is simply a statement, or set of statements, that includes at least one premise and a conclusion. A premise includes the reasons and evidence behind a conclusion. A conclusion is the statement that the premise supports and is a way of promoting a certain belief or point of view. To help us better identify the premise and conclusion of an argument, we can take a look at indicator words. 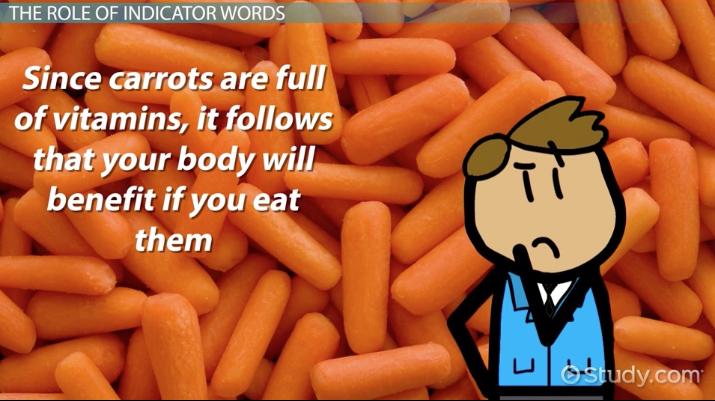 Coming up next: How to Identify Nonargumentative Uses of Language

The Role of Indicator Words

Since carrots are full of vitamins, it follows that your body will benefit if you eat them.

This statement about carrots includes indicator words. Indicator words provide assistance to you when you are trying to identify an argument and its parts. The phrase Since carrots are full of vitamins uses the indicator word 'since' which is often associated with premises. The last part of the sentence uses the phrase, 'it follows that' to show that it is a conclusion.

Examples of words or phrases that are typically included in premises:

Examples of words or phrases that are typically included in conclusions:

A premise and a conclusion may not always look so neat and easy to identify. Sometimes the order will be different than our example. Often there are multiple sentences instead of just one sentence, like we've used here. Sometimes there will be no indicator words used at all! It's important to consider all of the information you are receiving to help you determine if an argument is being made and which is the premise versus the conclusion.

Let's consider another statement about carrots:

Carrots have significant vitamin content, according to research. Eating them will benefit your body.

This argument includes a premise and a conclusion without ever using any indicator words. However, you can identify that it is an argument, and which part is which, by thinking through what is being discussed. Clearly, the person making the statement is making the case for eating carrots and giving evidence for why this is a good thing to do. Indicator words can be helpful when you want to make an argument or when you are trying to identify one, but they don't always have to be included. They are clues that are nice to have and can make things clearer, but they are not always present in arguments.

Since the last time we saw one another, I grew a beard.
I was running late, so I forgot to shave.

Each of these statements includes words that were on our indicator word list: 'since' and 'so.' But wait! These statements aren't arguments, and the words being used aren't telling us anything about premises or conclusions. Sometimes words that are helpful to us in arguments are really not relevant in other circumstances. When you're keeping your eye out for indicator words, realize that sometimes they can fool you.

For example, in the sentence, Since the last time we saw one another…, the statement is actually describing what has happened since a particular time. If it was an argument, 'since' would be used to describe reasons why we should believe a particular conclusion. Here the word is used in a different way. The portion of the second statement that says …so I forgot to shave could look like it's a conclusion because it has the word 'so' in it. Yet, the statement is really just explaining what happened, not claiming that something is true or false.

Argument Structure: From Premise to Conclusion

The Role of Argument in Critical Thinking

How to Change Categorical Propositions to Standard Form

Qualities of a Critical Thinker

Topic vs. Argument in a Reading Passage