Ashley has taught first, fourth, and fifth grades and holds a master's degree in Curriculum and Instruction.

Linsey is currently pursuing her Ph.D. in English Literature at Claremont Graduate University and has taught students of all ages in English and the humanities for 10 years.

Ocelot?! What's an ocelot? Ahhh. . . you've just been assigned a research project! Well, that doesn't sound too bad, but what if you've never heard of this animal? How can you write a paper about it? Well, first you are going to find and read articles that tell you about ocelots and that will give you the information necessary to write your paper. But should you write exactly what you read? Nope! Your teacher wants to know what you learned, not what an author knows. So how can you use the information you read about ocelots? You paraphrase it, which means you put the information in your own words.

Writing books and articles takes a lot of time and hard work. Authors want you to enjoy what they wrote and even learn from it, but they want everyone to know it is their work. If you don't paraphrase an author's work, but rather use exactly what an author said and claim it as your own work, you're guilty of plagiarism, which is considered stealing, and is taken very seriously by schools and colleges.

Paraphrasing can also be useful when taking notes! If you're in a class watching a video or listening to your teacher, you can't possibly write every word you hear, but you can paraphrase what you hear. Let's find out how! 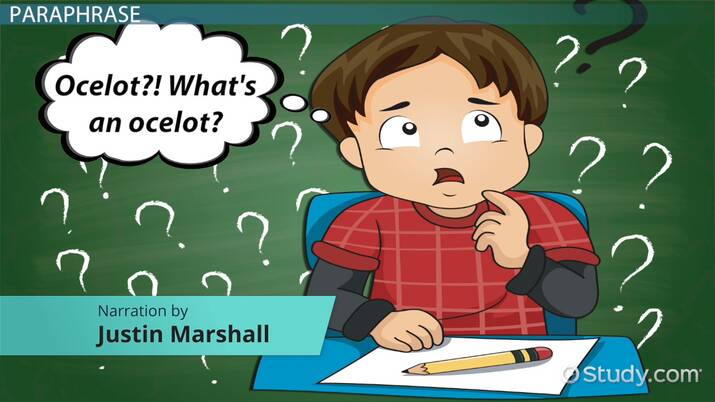 Coming up next: Compare & Contrast Lesson for Kids: Definition & Examples

When you paraphrase, you take the big ideas and put them into your own words. When paraphrasing, it's fine to use some of the same words, but not all of them. You obviously wouldn't want to change things like names, places, or dates as those are specific facts, but everything else should be in your own words. For example, your teacher reads the following on ocelots and you need to take notes. Let's see how you can do that and then paraphrase what your teacher read.

''Ocelots are small, American wild cats about twice the size of housecats. Their coats have distinctive markings in a wide variety of patterns. Each ocelot's pattern is unique, with dark spots on an orange, tan, and white coat. . . . Ocelots are also sometimes called painted leopards -- because of their markings -- and dwarf leopards -- because of their markings and their size. However, ocelots are only distantly related to true leopards or tigers.'' (Bradford, 2016)

How can you put this into your own words? Remember, you just need the big ideas, so as you're listening, make a list of the big points; you can write the sentences later. Here are some big ideas from the paragraph:

Ocelots are wild cats that are about twice as big as cats kept as pets. No two ocelots look exactly the same because their patterns and coloring can be different. They are compared to leopards since they look similar, but ocelots aren't leopards.

Let's look at another example.

''Lions are very social compared to other cat species, often living in prides that feature females, offspring, and a few adult males. Male lions are easy to recognize thanks to their distinctive manes.''

What are the big ideas from the paragraph?

Lions are social animals that live in prides. A pride can have male, female, and young cubs. You can spot a male lion by their manes.

The paraphrased sentences don't have all the little details, but they do have the big ideas and, most importantly, they're in my own words!

Paraphrasing is taking what someone else has written or said and putting it into your own words. Remember, authors want credit for their work, and paraphrasing is how you can use information from another source in your own work.

In this lesson, we learned that paraphrasing allows us to explain what we have heard or read in our own words. When writing for school, it is important to show your teacher what you have learned without taking credit for someone else's words. By paraphrasing, we keep the main ideas and messages of what we've learned, but we put them into our own words to show our understanding of the subject.

Practice on your own

Practice paraphrasing by putting the information from the following paragraph into your own words. Make sure to include the main ideas!

Penguins are ocean-loving birds that cannot fly. These lovable black-and-white birds have evolved adaptations to cold weather, and the majority of penguin species live near frozen Antarctica. There are about eighteen different types of penguin, and they range in size from three to 51 pounds based on their species. Different species also have different lifespans: some live only about six years, while others can live up to twenty. All penguins are carnivores and swim at amazing speeds to hunt for sea creatures like crabs, fish, and squid. On land, penguins huddle together in flocks to maintain warmth, take turns protecting their eggs and feeding their young, and waddle and hop around in a way that has endeared them to human spectators.

How to Paraphrase: Lesson for Kids
Related Study Materials

How to Connect Ideas in an Informational Text

Solving Problems With More Than One Operation: Lesson for Kids

Avoiding Plagiarism: How to Quote and Paraphrase in Your Writing

Paraphrase Examples & Purpose | How to Paraphrase

Creating a Bibliography: Lesson for Kids

Writing Revision: How to Fix Mistakes in Your Writing

Determining the Problem and Solution of Text Read Aloud