In this lesson, you're going to learn about the definition of a reflection, quadratic equation, and how to visually and mathematically reflect a quartic equation over the x-axis and the y-axis.
Create an account

If you ever stood in front of a mirror, or next to a calm pond, you would have seen a reflection, which in math is the flipping of a point or figure over a line of reflection (the mirror line).

Reflection can also be applied to a quadratic equation, which is simply an equation where the highest exponent is 2. The simplest of these is y = x^2, and the standard form of one is y = ax^2 + bx + c, where a, b and c are numbers and a cannot equal 0.

Let's see how we can reflect quadratic equations using graphs and some really easy math. 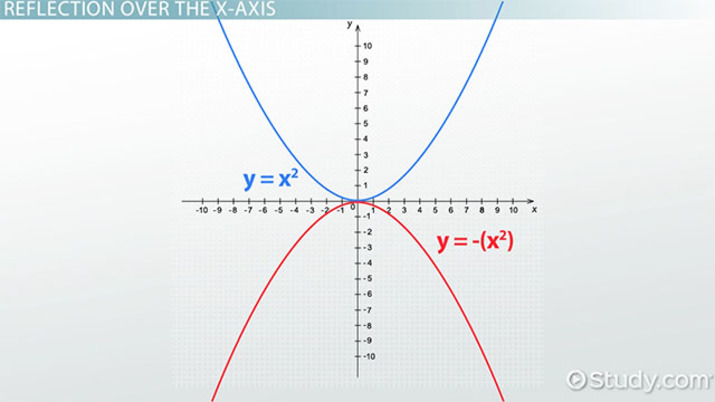 Coming up next: Parabolas in Standard, Intercept, and Vertex Form

Reflection Over the X-Axis

For our first example let's stick to the very simple parent graph of y = x^2.

On the screen you can see that the graph of this equation is a parabola. The reflection of such a parabola over the x-axis is simply written as y = -(x^2). In other words, the function of f(x) becomes -f(x) when reflected over the x-axis.

When reflected everything looks like an upside down version of our parent graph. Doesn't it?

In fact, remember that a positive quadratic has a smiley face, while the negative quadratic has a frown. It's really easy to recall this and important to; because, if you have an equation where the value of a is negative but you are coming up with a quadratic that is right-side up, then you know you are doing something wrong, and you need to double check where you've gone amiss.

Reflection Over the Y- Axis

Now, let's go back to our simple equation of y = x^2. What if we wanted to reflect it over the y-axis? In this case y = x^2 would become y = (-x)^2; because, a parabola is symmetric in general, and in this case it's symmetric about the y-axis, the exact same graph would be created.

In general, though, you should have recognized that if we reflect a function f(x) over the y-axis, it becomes f(-x). That means we replace very x in the original function (or equation) with a -x. Let's try a harder example to drive this point home.

Well, that wasn't that hard, was it? Just remember the following key points when reflecting a quadratic equation. A reflection is the flipping of a point or figure over a line of reflection (called the mirror line), and a quadratic equation is an equation where the highest exponent is 2. When reflecting over the x-axis, the function f(x) becomes -f(x). For instance, y = 3x^2 would become y = -(3x^2). On the other hand, when we reflect the function f(x) over the y-axis it becomes f(-x). For instance y = 3x^2 + 2x would become y = 3(-x^2) + 2(-x).

How to Solve and Graph an Absolute Value Inequality

Writing Quadratic Equations for Given Points