A linear system with three variables is a collection of three linear equations in three variables, with none of the variables having assigned exponents. Practice the elimination method to discover how making variables 'disappear' provides a simplified solution. Updated: 10/08/2021
Create an account

A Linear System in Three Variables

The most common variables that we will see are the letters x, y, and z. Even though we have three variables, each equation may not have all three listed. If we don't see a variable listed, we note that variable as having a coefficient of zero.

When you graph each equation, you will end up with a flat plane. When the three planes intersect at one point, then we say that the system has a solution that we can solve for. You will come across these systems as you progress in your math. Let's try and solve one of them using what we call the elimination method: 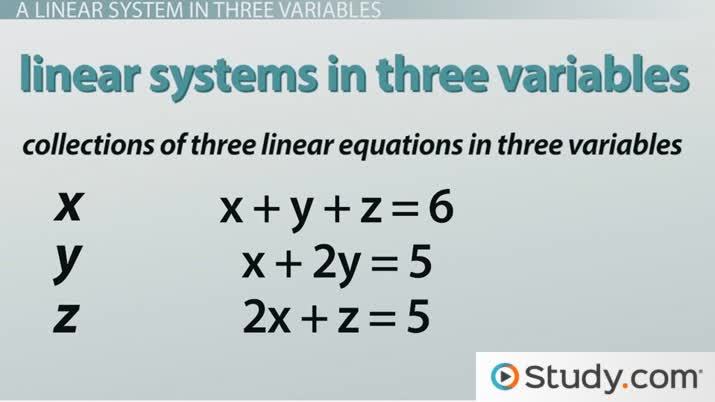 Coming up next: How to Solve a Linear System in Three Variables With No or Infinite Solutions

Now I see that my fourth and fifth equations have both a y and a z. I look at them and I see that I can add them right away to get rid of the z. So, adding them I get -3y = -6. Hey, look at that! I can easily solve this new equation!

I can plug this into either the fourth or fifth equation to find my z. The fourth equation looks easier, so I choose this one to plug my y into. I get -2 + z = 1. I solve it by adding 2 to both sides. I get z = 3. Awesome!

We keep repeating this process until we get to the point where we have an equation with only one variable. Then, we solve that equation for that variable. We use this answer and substitute it into another equation that we can solve after subbing in the answer. Then, we use our two answers to find the third and final answer. Our final answer will have three numbers: one for x, one for y, and one for z.

Solving Systems of Equations with Fractions

Solving Quadratic Inequalities in One Variable

Solving Linear Systems | How to Use Gaussian Elimination

Even and Odd Functions | Graphs & Examples

How to Find Amplitude of a Sine Function | Sine Formula & Wave

How to Write the Equation of a Parabola in Standard Form

Probability of Independent Events: The 'At Least One' Rule

Finding the Sum of Consecutive Numbers