In math, we come across equations by themselves with just one variable that we have to solve. And then we have linear systems, a collection of linear equations. Your linear equations are equations with variables that have no exponents. So 3x + 4x = 5 is an example of a linear equation, as is x + 3y - 4z = 3.

We need one equation for each variable in our system in order to solve the system. So if we have two variables, we need two equations. If we have three variables, then we need three equations, and so on. In this video lesson, we will learn about using Gaussian elimination, a method to solve a system of equations, to help us solve our linear system. This method requires us to know how to turn our linear system into matrix form and then use simple matrix manipulations. Let's look at solving this linear system using Gaussian elimination: 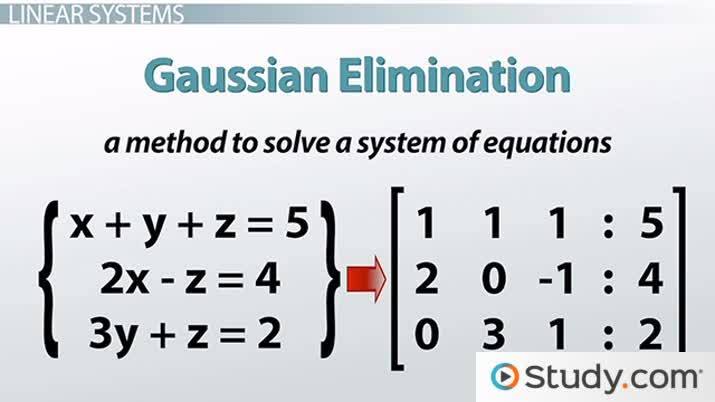 Coming up next: How to Solve Linear Systems Using Gauss-Jordan Elimination

Remember that a matrix is just a rectangular array of values put into rows and columns. We first need to turn our linear system into matrix form by turning it into an augmented matrix. An augmented matrix is the combination of two matrices. In our case, we have a matrix for the coefficients of the left side of the equation and another for the right side of the equation.

Recall that turning a system of equations into matrix form involves isolating just the coefficients along with their appropriate signs after organizing them so that the x term is first followed by the y term followed by the z term, the equals sign, and then the constant. We can use a vertical line, or several dots in a vertical line, to represent our equals sign. Our linear system is already organized properly, so all we need to do is to isolate our coefficients. Our first row will have 1, 1, 1, | and then 5. Our second row has 2, 0, -1, | and 4. Our third row has 0, 3, 1, | and 2. Our matrix looks like this:

We can now use Gaussian elimination to help us solve this linear system. Gaussian elimination is about manipulating the augmented matrix until we have the matrix that represents the left side of the equations in upper triangular form. What this means is that we want all zeros below the main diagonal. This main diagonal starts at the top left and ends on the bottom right of the coefficients matrix. In other words, we want to manipulate the matrix so the 2 on the second row and the 0 and 3 on the third row are all 0s.

We didn't rewrite the first row because we don't need to change that equation. We only multiplied the first row by 3 just so we can subtract it from the second row. Remember that in algebra, whenever we multiply an equation by any constant, the equation doesn't change at all; the numbers just get bigger by a factor.

Now that we have zeros below the main diagonal, we are done using Gaussian elimination. We can now go on and solve our linear system.

Completing this lesson can prepare you to:

How to Write an Augmented Matrix for a Linear System

How to Determine the Eigenvalues of a Matrix

Matrix Row Operations Rules & Examples | What is a Row Matrix?

How to Use the Rational Roots Theorem: Process & Examples