Determining the venue, or location, a criminal or civil court case is heard is dependent on several factors and differs between state and federal courts. Learn more about how venue is determined for a court case by examining the specifics of three important case examples. Updated: 08/30/2021
Create an account

Venue is the location a civil or criminal case is heard. The venue is decided using several factors:

However, in a criminal case, venue is decided based on:

In real property cases, or cases that involve the transfer of property, like buying or selling a home, the court located in the county where the property is situated is the proper venue. To simplify, the venue is the court where a civil or criminal case will be heard. It is located closest to where the dispute or crime occurred. There are exceptions to this rule. In the case of a high-profile criminal or civil case, it may be necessary for the venue to be changed from the location closest to the dispute or crime. There are several reasons the venue may change:

Sometimes, even though the fairness of a trial may be jeopardized because of the media's influence, a venue change may still be denied for other reasons. 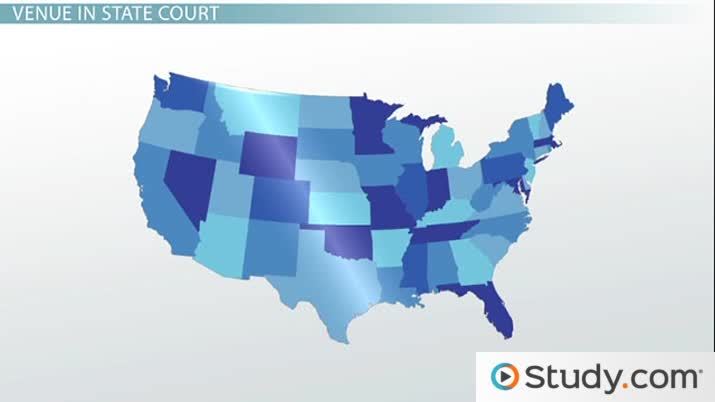 Coming up next: Starting a Lawsuit: Parties & Beginning Process

In State of Florida v. Casey Marie Anthony, a young mother from Orange County, FL, - specifically, Orlando - was accused of using chloroform and duct tape to suffocate and eventually kill her young daughter, Caylee. Anthony was arrested and charged with first-degree murder. She was also charged with several other crimes, including aggravated child abuse and misleading police in an investigation. In an effort to remove suspicion from herself, Anthony accused a nanny, Zenaida Gonzalez, of kidnapping Caylee. As a result of this accusation and subsequent media coverage, Gonzalez was harassed, threatened both physically and emotionally and denied her right to privacy. She was also terminated from employment. Gonzalez wanted to initiate a civil action against Anthony but was denied until after Anthony's murder trial was decided. Eventually, the trial ended in an acquittal for Anthony.

Gonzalez went through with her plans to sue Anthony in a civil action in Orange County, where the dispute took place. Anthony's lawyers did not feel that Anthony would benefit from a trial in Orange County and requested a motion to change venue. It was argued that Anthony would not receive a fair trial due to the negative publicity surrounding her murder trial. The judge denied the motion based on the burden of costs to the taxpayers for a change in venue. While the case of Gonzales v. Anthony did not have a change of venue, there are cases that warranted a change in venue because circumstances surrounding the case are just so sensitive, a fair trial is worth the price.

People v. Johannes Mehserle was an extraordinary case in which venue was moved from the location closest to the crime to a location much further away because of the media frenzy and jury selection issues. Johannes Mehserle, a Bay Area Rapid Transit officer, shot and killed Oscar Grant, a 22-year-old, on the platform of the station. Mehserle claimed that he meant to pull his TASER but instead pulled his gun. Mehserle was charged with involuntary manslaughter. In the time before the trial, the case caught the media's attention, and racial tensions escalated in the area.

It was decided that the nature of the crime and Mehserle's position as a police officer could sway a jury. There was even mention of a lack of qualified jurors in the proper venue of Oakland, CA, and that Los Angeles would produce a more substantially mixed pool of jurors. In this case, the judge granted the change in venue from Oakland, CA, to Los Angeles based on the availability of jurors and fairness to the police officer. Even with a venue change, Mehserle was sentenced to two years in prison, but the sentence may have been more severe had he been tried in the same location where the crime was committed.

Had the cases above been federal court cases, venue would work differently.

In federal court cases, venue is determined by different criteria than state court cases. Venue is based on the specific level of court.

U.S. District Court is the proper venue in cases where federal law is at issue or defendants to the action do not reside in the state where the action was filed. This means, if a civil or criminal case holds the United States as a party to the case, the venue for this case would be a U.S. District Court. There is at least one of this level of court in every state. In a case that involves a crime against the United States, like racketeering, the proximity of the crime scene has nothing to do with the location of the court that hears the case.

John Gotti and several other men were indicted, or formally accused, of crimes of the RICO Act, a federal crime. RICO stands for Racketeering Influenced and Corrupt Organizations and includes acts and threats of murder, illegal trafficking of contraband, robbery and extortion, amongst other charges. Because racketeering is a federal crime, the trial was held in U.S. District Court. During the trial, the jury could not reach a decision on two of the three racketeering charges. A mistrial was declared, and Gotti would be re-tried.

A mistrial, in this case, occurred because the jury could not reach a unanimous decision based on evidence presented to the court. Gotti and his crew appealed the lower court's decision of a mistrial. The case was sent up to the U.S. Court of Appeals for reconsideration. This court hears cases tried in the lower court only if the appellant believes that the decision was in error based on the application of law. Gotti believed there was an error in the counts of racketeering the jury had to consider. The law states that an established pattern of racketeering under RICO must present at least two acts. Since the jury only considered one count, it was a violation of law. Simply put, the jury was undecided on two of the three acts, leaving just one act at issue. No pattern of RICO activity could be established. Gotti requested that the appellate court acquit, or free him of all charges, under the double jeopardy rule, meaning a person cannot be tried for the same crime twice. In the appeal, the mistrial decision was affirmed, and no new trial was allowed. In other words, the saga ended with Gotti a free man.

How Venue is Determined for a Court Case
Related Study Materials

What is the Jurisdiction of the Supreme Court?

State vs. Federal Court | What is a Dual Court System?