Sometimes it's hard to acknowledge when you are wrong, but not swallowing your pride can get you in a lot of trouble. In this lesson we will analyze the concepts of pride and hubris in Sophocles' 'Antigone' by looking back to the text for important quotes.
Create an account

Background on Pride and Hubris

In high school, pride is something that helps unify students and build community. Pride is a positive trait that is characterized by a deep pleasure or satisfaction in one's achievements. Being proud of one's achievements, like one's school culture, is an important part of a growing identity. But what happens when someone's pride grows into a bad attitude and a stubborn mindset?

The term hubris, on the other hand, means excessive pride, and for the Ancient Greeks it meant putting one's self before the gods. Back then, if you were unable to own up to your faults and/or acknowledge humility, your fate was at the mercy of the gods. The characters Antigone and Creon from the play Antigone are tragic heroes that were unable to swallow their pride and let go of their stubborn ways. Let's analyze the text to see where their pride originated and how something so seemingly positive became their fatal flaw. 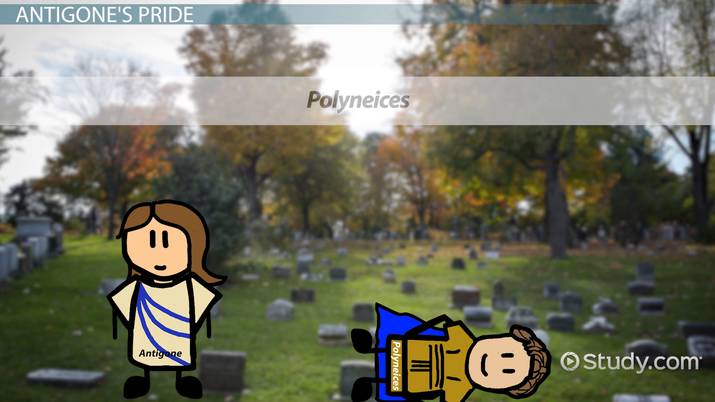 Coming up next: Justice in Antigone

While the definition of pride has a positive connotation, too much pride can lead a person to cultivate a negative attitude. At the beginning of the play, Antigone exhibits healthy pride for her family and culture, choosing to bury her brother Polyneices and face the possibility of death as a consequence from the newly appointed king. While her actions seem justified, her attitude slowly turns from confidence to a sickly pride that masks her rationality.

Antigone claims it's 'beautiful to die in such a pursuit,' but her sister Ismene is not so sure. Ismene understands Antigone's reasoning but refuses to help, offering her loyalty only through secrecy. This angers Antigone; she wants everyone to know she is a hero. 'Oh tell it, tell it, shout it out!' Believing Ismene does not care about their family or the gods.

When Creon first asks Antigone if she knew the consequences of burying Polyneices, Antigone rudely responds, 'Of course I knew. Was it not publicly proclaimed?' While honorable in her actions, Antigone's words are full of pride that turn to stubborn anger. She's not willing to listen to her sister, nor hear the dangers of her actions that could potentially affect the lives of those around her, including her fiance Haemon who happens to be the king's son.

Is remaining loyal to her brother positive? Yes. Should she feel pride by standing up for her family? Yes, but her brazen attitude towards death masks the fact that she broke the law and her attitude ultimately digs her grave. But while her attitude is coarse, her argument regarding the gods is solid. 'Since Zeus never promulgated such a law,' why should she listen to Creon, pointing out Creon's hubris in creating this new one.

But let's face it: two wrongs don't make a right. Her pride turns negative, and it forces her to confidently accept death, feeling she is 'unjustly judged' in the process. Creon, on the other hand, transcends the boundaries of pride, showing the audience what happens when hubris takes over.

Creon sees Polyneices as a traitor since he fought against Thebes, and declares the lack of burial to show Thebes he is a loyal king to the city. While Creon seems just by 'not putting traitors up on pedestals,' he forgets the god's laws in the process. He may rule Thebes but not the Heavens. When the Choragos implies the gods may have buried the body, Creon angrily responds: 'You really think they give a damn, the gods, about this corpse? . . . Are the gods these days considerate to criminals?' Creon can't imagine he could be wrong, but with this response he forgets he is insulting the Heavens, assuming that he understands the thoughts of the gods.

From this point on, his hubris grows, especially when Haemon attempts to talk reason into him. Haemon explains the people don't agree with his orders, but this only makes Creon's responses more stubborn. Creon reminds Haemon that 'The state is his who rules it,' which makes Creon sound like a dictator, rather than the fair and faithful leader he claims to be. It is here Creon seals his fate and the fates of those around him, as the prophet Teiresias comes to read him his dismal future.

Creon greets the prophet as 'venerable Teiresias,' yet his tone quickly changes when the prophet calls Creon's intentions into question. Teiresias warns of the dangers to come if Creon is unable to own up to his misjudgment and bury Polyneices, but Creon believes Teiresias is telling him lies 'all for gold,' and that he has 'fallen from grace.'

After Teiresias leaves, Creon speaks with the Choragos again, who reminds Creon that Teiresias has never 'stirred the city to a false alarm.' In this moment, something changes in Creon. His response is uncharacteristic: 'It's hard to eat my words, but harder still to court catastrophe through overriding pride.'

Creon's pride is beyond the limits of humanity and extends to the definition of hubris. He believes everyone is out to defy him, when in reality everyone is looking out for his best interest. Like Antigone, Creon cannot believe he could be wrong, even putting himself above the prophet who has never made a prediction that proved false. In the end, Creon has a change of heart, but he does not show remorse until Death reminds Creon that he rules nothing, and Death itself rules everything and everyone.

Do you think it's ever too late to acknowledge your mistakes? We are taught 'better late than never,' but unfortunately for Creon, it was too late. His hubris, excessive pride, mixed with Antigone's pride, a positive trait that is characterized by a deep pleasure or satisfaction in one's achievement, caused three unnecessary deaths. Creon began as a stern yet rational ruler, but he let power get the best of him. His hubris leaves him without a queen or a son. Antigone thought she was doing right by her brother and the gods, but her pride pushes her to take her own life. While both felt justified, their intentions were controlled by pride and hubris, which masked the rationality of their choices and perspectives.