The humerus is the long bone in the upper arm which is attached to other bones, including the elbow and shoulder, among others. Learn more about the definition of the humerus and its 13 distinctive anatomical features and the implications and treatment of a fracture. Updated: 10/14/2021
Create an account 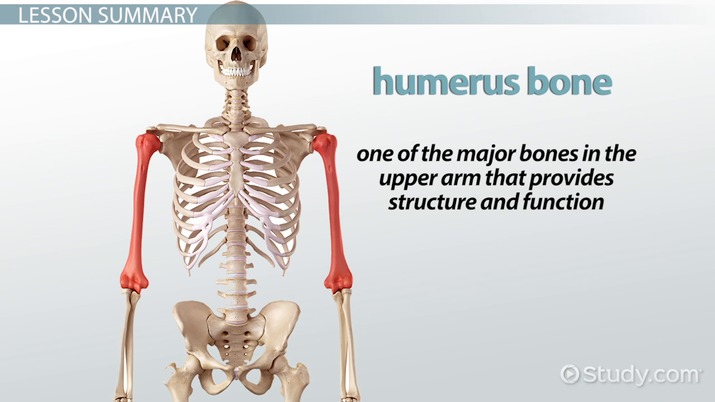 The anatomical (physical and structural) features of the humerus include:

3. The greater tubercle (a round projection, also called a nodule), is where muscles and ligaments attach. It is located on the upper most part of the head where it flattens and has a front and back face. This is where three of the muscles that form the rotator cuff - which provides mobility and strength to the shoulder joint - attach.

5. The intertubercular groove, also called sulcus, is located between the greater and lesser tubercles. It's a deep indentation and the outer edges are called 'lips'. Many ligaments are attached to this grove.

6. The body (also called the shaft), is the long straight cylinder like section of the bone with a rough surface. There are many muscles and ligaments that attach to the humerus - the rough surfaces are due to these attachments.

7. The deltoid tuberosity is on the side of the shaft where the deltoid muscle attaches to the humerus.

8. The radial groove runs down the back surface of the shaft and is parallel to the deltoid tuberosity. The radial nerve and profunda brachii artery are attached to this groove.

9. The medial and lateral supraepicondylar ridges - a condyle - form the knuckle projection of a bone. This is the location of muscle attachments of the back forearm bones (the ulna and radius).

10. The lateral and medial epicondyles are where the ulnar nerve resides.

11. The trochlea is located in the front and goes around to the back of the humerus. The ulna bone is attached here.

12. The capitulum is beside the trochlea and it's where the radius bone attaches.

13. Finally, there are 3 depressions on the humerus located at the end of the bone. They are the coronoid, radial and olecrannon fossae. These areas are very important because without them there would be no place for the forearm bones when the elbow is bent. They accommodate the forearm bones during bending of the elbow.

Imagine this scenario: your friend Susie loves to climb trees. The other day, she was climbing down a tree when a bee landed on her nose. When Susie was swatting at the bee, she lost her balance and down she went. When Susie fell, she landed on her left arm, which was pointing straight down and she heard a bone snap.

The fracture (or broken bone) occurred at Susie's surgical neck of the left arm. Luckily, she did not cut an artery or any nerves but she still needed to have surgery and her arm will need to be in a cast for about 6 weeks, which means no more tree climbing for awhile.

Whenever there is a fracture of the surgical neck, doctors are very concerned because of the arteries and nerves that are located in that area. Let's talk about this a little. Any cutting of an artery is a medical emergency because blood can be lost at such a rate that the person can easily die. But the artery of most concern in a situation like this is the posterior circumflex artery.

The axillary nerve is also located in this area and when that nerve is cut, the arm muscles will become paralyzed (or unable to move). As a result, a person whose axillary nerve has been cut cannot raise his or her arm and will be unable to feel sensation below the cut.

Now let's talk about other fractures that may occur and the resulting defects, including a mid shaft fracture and distal humerus fractures:

1. A mid shaft fracture can damage the radial nerve causing the wrist to drop and loss of sensation to parts of the hand and fingers.

2. A distal humerus fractures include two types: supraepicondylar fractures and medial epicondyle fractures. The first type happens when a person falls on an open arm but it fractures at the elbow. The deformity caused by this type of fracture is called Volkmann's ischaemic contracture where the whole hand cannot close. In a medial epicondyle fracture, the ulnar nerve is affected and the index and middle fingers cannot bend. This is referred to as the ulnar claw.

The major anatomical features of the humerus include the head, the two necks, the body or shaft, and the condyles. The minor features include the tubicles, groves, tuberosity, trochlea, capitulum, and the three depressions.

Fractures usually occur at the surgical neck. Other fractures can occur at the mid-shaft area and in the distal area of the humerus. The two distal fracture areas are located at the supraepicondylar and medial epicondyle areas.

What are Phalanges? | Phalanges Function & Anatomy

Bones of the Pelvis | Anatomy and Function

Acromion Process Types | What is the Acromion?