Hydrogen bonds are electromagnetic attractions between the positive and negative poles of atoms. These bonds are weak and easily broken, but account for many of the important properties of things like water and DNA.
Create an account

The Wonderful Properties of Water

Have you ever woken up early on a spring day and seen dew on a newly formed leaf? What a beautiful sight! But what makes those sparkling little drops of water sit so perfectly round? It has to do with the chemical properties of water. Specifically, it has to do with the types of bonds that water molecules have - hydrogen bonds. 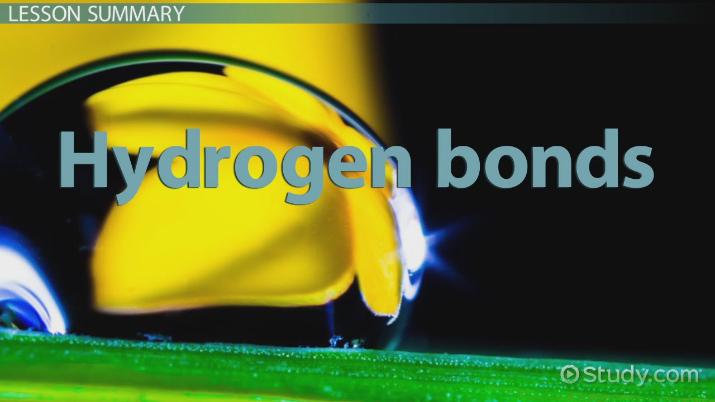 All things on earth are made of tiny particles called atoms. These atoms attach to one another to form all the stuff you see around you right now. Depending on what types of atoms are involved and how they attach to each other, that can tell you a lot about how any particular thing is going to act. There are a few types of bonds, some stronger than others. The strongest type of bond, the covalent bond, involves the sharing of electrons between two atoms.

See the four hydrogen atoms, each sharing an electron with carbon? Can you imagine trying to break up that? The weakest type of bond is the hydrogen bond. Instead of sharing electrons, something that brings atoms really close together, hydrogen bonds are formed using the electromagnetic properties of atoms.

A hydrogen bond is the electromagnetic attraction between polar molecules in which hydrogen is bound to a larger atom, such as oxygen or nitrogen. This is not a sharing of electrons, as in a covalent bond. Instead, this is an attraction between the positive and negative poles of charged atoms.

Look at this water molecule. See how big the oxygen is compared to those little hydrogens? Hydrogen atoms don't have the force necessary to pull electrons away from bigger atoms, so when hydrogen atoms are in a covalent bond with a bigger atom, the electrons tend to spend a little more time hanging around the bigger atom than the tiny hydrogen. That's positively lonely!

Now that we have a polar molecule, it acts just like a magnet. The positive end of one atom is attracted to the negative end of another atom. The result is a bunch of polar atoms lining up, end to end.

These are all polar water molecules, lining up end to end, and forming hydrogen bonds. Now, hydrogen bonds are pretty weak. There's no shared electron, so breaking a hydrogen bond is pretty easy. However, these bond account for a lot of important properties of molecules, including the phenomenon we know as water tension.

Ethylene glycol is a good example of intramolecular hydrogen bonding. See how it has several different atoms all bonded together? Now, just like we saw in water molecules, electrons like to spend more time around the bigger atom, so electrons hang out around the large oxygen atom more than they hang out around the tiny hydrogen atom. That leaves hydrogen with a positive charge and oxygen with a negative charge. This causes the part of the molecule with hydrogen to be positively charged, while the part with oxygen to be negatively charged. See how close that hydrogen and oxygen are in this molecule? Because they are so close in space, they get attracted to each other and form an intramolecular hydrogen bond. This type of bonding makes sure different molecules stay in their correct shapes.

Students should feel confident with the following tasks upon completing this lesson:

What Are Pores? - Definition & Function

What Is a Reaction Intermediate? - Definition & Examples

Inflation & Strikes After World War I

What is a Metallic Bond? - Definition, Properties & Examples