When you step on a scale, you get a reading of your weight, which is simply the force due to gravity. Your weight on the scale will read the same no matter how you stand on it - with both feet on the scale, with one foot in the air or even if you do a handstand!

What's different is the pressure you exert on the scale in each of these situations because this is the force exerted over a given area, or in equation form, P = F/A. Your weight is the force, but the pressure depends on how much area that weight is applied over, be it both feet, one foot or your two hands. 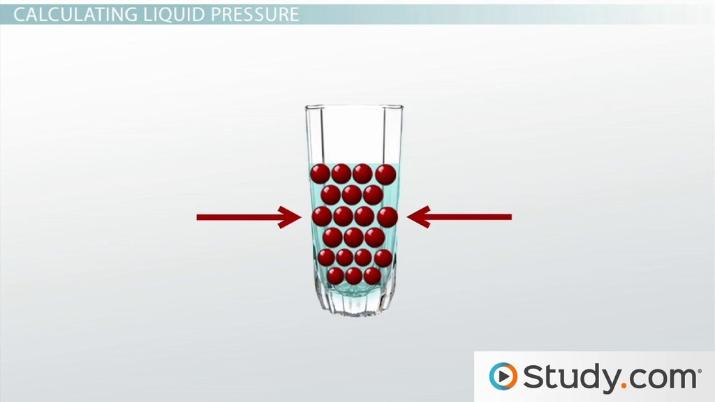 Try it now
Back
Coming up next: Fluid Mass, Flow Rate and the Continuity Equation

Pressure in a Liquid

Gas particles are not very friendly. They spread out to fill the entire space of their container, enjoying their personal space and freedom. But as gas particles fly around, they sometimes collide with each other, as well as the walls of the container. These interactions create pressure in the container, and in a gas, this pressure is the same throughout the entire fluid.

But you can clearly see that this is not the case for liquids because they do not fill their entire container like gases do. This is because of the bonds between the liquid's molecules, which are what hold them together. When you pour a liquid into a container, it fills the bottom because gravity pulls it down. This force due to gravity is the same as your scale reading - it's the liquid's weight and is what creates pressure in that liquid.

The pressure in the liquid also increases with depth because of gravity. The liquid at the bottom has to bear the weight of all the liquid above it, as well as all of the air above that! You don't notice the weight of the air around you because your body is 'pressurized' the same as the atmosphere, but any liquid under that atmosphere definitely feels it.

When a liquid is at rest, meaning that it is not flowing, we can determine its pressure at a given depth known as hydrostatic pressure. The way we determine this is through an equation: P = rho * g * d, where P is the pressure, rho is the density of the liquid, g is gravity and d is the depth.

You may also see the hydrostatic equation written as P = rho * g * h, where the h stands for height. This may be used because sometimes we want to calculate the pressure of a liquid as it fills a column (like when measuring barometric pressure), so we need to know the height of the fluid. It's like taking the depth and flipping it upside down. As long as you use the appropriate measurement, either letter is okay to use, but it might help to stick with the letter that best represents what you're measuring - either the depth or the height.

It's important to remember that the density of the liquid doesn't change with depth any more than the density of a candy bar changes when you break it into separate pieces. Liquids are not compressible, meaning their molecules are already about as close together as they can be. It's also a good time to take note of that g in the equation. It acts as a constant reminder of how gravity plays a crucial role in the pressure of a liquid at any given depth.

Now that we know how to calculate hydrostatic pressure, let's put it into action. Let's say we want to calculate the pressure of water at the bottom of a pool that's four meters deep. Luckily, you don't need to memorize the densities of various fluids since those can be looked up, and the density of water is 1,000 kg/m^3. We know that g is always 9.8 m/s^2, so it looks like we have everything we need to find the pressure.

Plugging in our values, we get: P = 1,000kg/m^3 * 9.8 m/s^2 * 4 m. Our pressure then is 39,200 kg/m-s^2. These units of pressure are perfectly acceptable, but we can also write them as Pascal. This is represented by the letters 'Pa,' which is the standard unit of pressure and is named after the French mathematician Blaise Pascal. A Pascal is the same as 1 kg/m-s^2, but writing Pa sure takes a lot less time!

We can also rearrange this equation to determine other information about the liquid. Say, for example, that we already know the pressure and the density of a liquid, but we want to find the depth at which this pressure occurs. All we have to do is move the variables around in the equation and then calculate the depth. Let's say our pressure is 10,000 Pa (same as 10,000 kg/m-s^2) and our liquid this time is milk, which has a density of about 1,035 kg/m^3.

This same principle can be used to find the density of the liquid if the pressure and depth are known. In fact, since g is always 9.8 m/s^2, as long as you know two of the other variables, you can easily calculate the third. All it takes is a little rearranging followed by some quick math.

In a liquid, pressure pushes not only on the container that holds the liquid but also on all parts of the fluid itself. Pressure in a liquid is caused by the weight of the liquid, which is the force due to gravity. As the depth increases, so does the pressure because there is more weight (or force) coming from above.

When you get to the end of this lesson, you might have the capacity to:

Buoyancy Formula & Examples | What is Buoyancy?

Moment of Inertia of a Semicircle | Formula, Axis & Derivation

Buoyancy Formula & Examples | What is Buoyancy?

Moment of Inertia of a Semicircle | Formula, Axis & Derivation