What Is the Ideal Gas Law?

Breathing is something our bodies have been doing since we were born. We can calculate the pressure, volume, temperature, and amount of gas we inhale and exhale. Before we do a calculation involving breathing, let's learn more about the ideal gas law.

First off, what is an ideal gas? In physics and chemistry, scientists derive equations for perfect-case scenarios because, it many cases, situations are so close to ideal that we can assume they are ideal. An ideal gas is a gas where the gas particles are in a giant container bouncing into and off each other when they collide, like microscopic billiard balls. Also, the gas's temperature and kinetic energy (energy of motion) are proportional.

The ideal gas law relates pressure, volume, the molar amount of the gas, and its temperature. It's given by the equation:

Let's go through some examples using the ideal gas law. 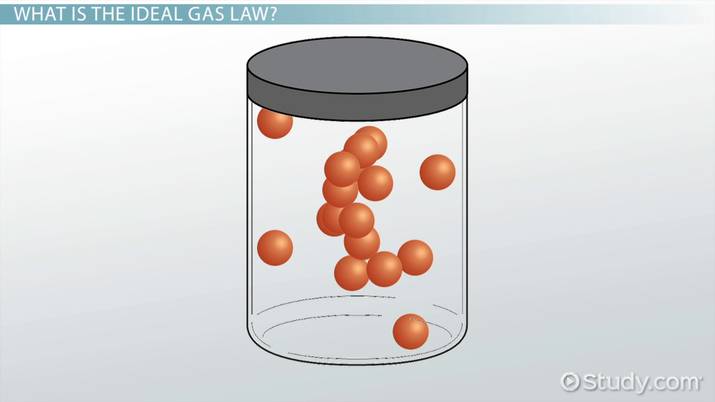 5 moles of nitrogen gas is in a 100 liter fixed cylinder at 300 Kelvin. What is the pressure of the gas?

It's often a good idea to rearrange equations to solve for the variable being asked about. In this case, we need to get the equation in the form of P = . . . We'll do that after we organize the values we'll need.

Alright, so let's begin with formula PV = nRT and change that appropriately so it now is P = nRT/V. Now we can plug in the values to determine the pressure. We get:

This problem is a ''before and after'' scenario. We need the change in pressure (ΔP), which is the initial pressure subtracted from the final pressure (Pf - Pi). As before, we'll organize the values we'll need.

Notice that we don't have initial and final subscripts for the molar amount of gas and volume. This is because the number of moles of gas doesn't change. The volume of the gas can't change either because it's a sealed cylinder. The only things that can change are the temperature and pressure. Plugging in the numbers is next and we get:

25 moles of oxygen gas are in a cylinder with a piston that is stuck at a volume of 0.5 L. Initially the pressure inside the cylinder is 3.2 atm, and the temperature is 400 K. To what temperature does the gas have to be heated for the pressure to reach 4 atm?

In this problem, we need the temperature at the final conditions. There are several values we won't need, so let's organize the values we will be using.

Now we can get the equation we need, so we start with the original formula and rearrange it to:

Plugging in the values, we get:

Taking a deep breath, a person can draw in a maximum amount of air of about 0.02 moles of air at a temperature of 23° C, and a pressure of 1 atm. What is the volume capacity of their lungs?

This is another problem for the ideal gas law, but notice that the temperature is in °C. We need it in Kelvin. The conversion from °C to Kelvin is K = °C + 273. Writing out the values we need, we get

Rearranging the equation for volume, we can use the original formula and rearrange it so it's:

Plugging in the values, we get:

That's about 1/4 of the volume of a two-liter soda bottle.

The ideal gas law relates pressure, volume, the number of moles, and temperature of a gas in Kelvin. The ideal gas constant (R) is a value that makes the equation work. It's given by the equation PV = nRT where:

An ideal gas is a gas where the gas particles are in a large volume, and they move in straight lines. When the particles collide, they bounce off each other without sticking and the gas's temperature is proportional to its kinetic energy of motion.

When solving ideal gas law problems, it is a good idea to organize the values, and rearrange the equation, solving for the variable being asked about before plugging in the values.