Oceans & Continents of the World

Geography is important. Imagine trying to describe Europe to someone who had no idea where in the world it's located. Geographical location provides us with context. It's important to know where the seven continents are located and what their characteristics are. It's also important to know where the world's five oceans are. That is what we will do in this lesson. To begin with, look at the here map to familiarize yourself with the world's continents. 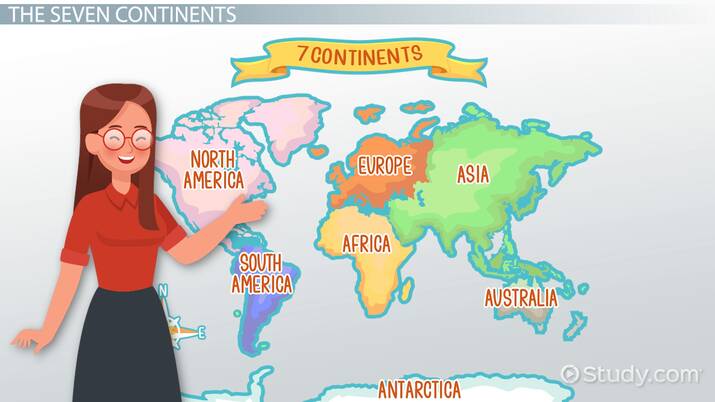 Coming up next: Mapping the Physical & Human Characteristics in North America's Regions

Geographers have divided the Earth into seven continents or landmasses. Each of them is distinct, with its own distinct culture and characteristics. We'll begin in the Western Hemisphere of the Earth, which includes North America and South America.

On a map, North America is the northern of the two land masses in the Western Hemisphere. For many of us who are Americans, North America is easily recognizable. The Florida peninsula and the narrowing of land in the south are perhaps its key geographical features. Today, the countries of Canada, the U.S., Mexico, and the smaller Central American countries can be seen on a political map of North America. The Caribbean islands are also normally included as part of North America. North America contains a variety of climate zones ranging from polar in the north to tropical further south. English, Spanish, and French are commonly spoken languages throughout North America.

The southern half of the continents in the Western Hemisphere is South America, which contains countries like Brazil, Columbia, Peru, and many others. The Andes Mountain range is a key geographical feature along South America's western coast. Spanish is a popular language in South America, but other spoken languages include Portuguese, Italian, and French. South America's climate ranges; while much of it is tropical, there are also arid regions and deserts.

Let's jump across the Atlantic Ocean and explore the Eastern Hemisphere. First, we'll discuss Europe. Europe is located north of Africa and to the west of Asia. Europe is one of the smaller continents, but its cultural influence on the world has been enormous. European culture forms the basis of Western culture as a whole. Countries like Germany, France, Great Britain, and numerous others make up Europe today. In some ways, Europe's climate is similar to that of North America.

South of Europe is Africa. Africa is often considered to be the place of origin of mankind. Africa is made up of countries like Egypt, the Congo, Sudan, South Africa, and others. Africa's climate is hot, and it contains jungles as well as deserts.

Australia is the only island continent. It's located to the south of Asia. It's also the smallest continent. Australia is mainly tropical. In addition to being a continent, it is a nation-state. English is the official language of Australia.

At the very ''bottom of the world,'' if you will, lies Antarctica. It's the southernmost continent. Antarctica is the ''frozen continent.'' Most of the continent lies under heavy ice. It's largely uninhabited, with the exception of a few scientific outposts and observation sites.

Above North America and Europe is the Arctic Ocean. This ocean surrounds the ice regions making up the world's North Pole. At the opposite end of the world is the Southern Ocean, which lies above Antarctica. To the northwest of Australia and the south of Asia is the Indian Ocean. This ocean borders the country of India, hence its name.

Let's review. There are seven continents. The Western Hemisphere of the Earth contains North America (the northern half of the Western Hemisphere) and South America (the southern half of the Western Hemisphere), while Europe (located north of Africa and to the west of Asia), Africa (located south of Europe), Asia (located east of Europe and Africa), and Australia (the only island continent and continent-wide nation-state) are located in the Eastern Hemisphere. On the southernmost part of the Earth lies the frozen continent of Antarctica. The Earth's five oceans are the Atlantic between Europe and the Americas, the Pacific between the Americas and Asia, the Indian near the subcontinent of India, the Arctic in the far North, and the Southern in the far South.

Identifying the Continents & Oceans of the World
Related Study Materials

What is a Continent in Geography?