Thomas holds a BA in education and English literature and has taught middle school English.

In this lesson, learn about imagery and how an author adds emotional connotation to images. Analyze Tolkien's use of imagery in The Hobbit through three example passages. Updated: 04/13/2022
Create an account

J.R.R. Tolkien's work in both The Hobbit and its sequel The Lord of the Rings is well known and loved because it's immersive; read these books, and you're overcome with the desire to travel the roads of Middle Earth. At times, you can almost hear the wind, taste the air, and see the mountains approaching on the horizon.

This desire is largely inspired by Tolkien's use of imagery. Imagery is, to put it simply, descriptive language that gives the reader a vivid picture in their mind. But there's a little more to it than that. In this lesson, we'll take a closer look at imagery in The Hobbit.

Imagery is a powerful literary device because images are inherently emotional. Some images are happy. Others are sad. And some images carry more nuanced emotions, like fear, foreboding, or relief. These attached emotions are an image's connotation. You identify imagery's connotation by answering a simple question: ''How does this make me feel?''

Some nouns, like ''dungeon'' or ''palace,'' have inherent connotations, while others are more neutral and require adjectives like ''dark'' or ''dreadful'' to carry emotion. Imagery can be static (a description of a mountain) or active (any action). This also affects the image's connotation. 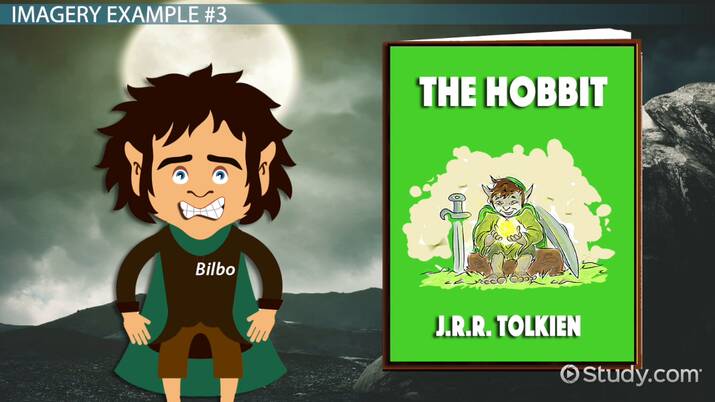 Coming up next: Bilbo Baggins in The Hobbit

In The Hobbit, Tolkien spends a lot of time describing the landscape. As Bilbo travels with Thorin's company, he sees plains, forests, and lots of mountains. The connotation changes as Bilbo's attitude does.

This shift in connotation is most noticeable in the way he describes the mountains. See this first passage, from early in the novel:

''One morning they forded a river at a wide shallow place full of the noise of stones and foam. The far bank was steep and slippery. When they got to the top of it, leading their ponies, they saw that the great mountains had marched down very near to them. Already they seemed only a day's easy journey from the feet of the nearest. Dark and drear it looked, though there were patches of sunlight on its brown sides, and behind its shoulders the tips of snow-peaks gleamed.''

How do you feel about this mountain? Probably some anticipation. A slight nervousness, but confidence that it can be scaled.

Tolkien describes the mountain as ''great,'' and only ''a day's easy journey'' away. This makes the mountain feel approachable. It seems ''dark and drear,'' but shows ''patches of sunlight.'' The image is static. This mountain gives a solemn feel, but not despairing. It's the first mountain Bilbo has seen, and he is in awe.

Let's look at another example:

''They were high up in a narrow place, with a dreadful fall into a dim valley at one side of them. There they were sheltering under a hanging rock for the night, and he lay beneath a blanket and shook from head to toe. . . then came a wind and a rain, and the wind whipped the rain and the hail about in every direction, so that an overhanging rock was no protection at all. Soon they were getting drenched and their ponies were standing with their heads down and their tails between their legs, and some of them were whinnying with fright.''

This passage carries a different connotation: panic. This image is active: ''the wind whipped the rain'' and ''they were getting drenched.'' Tolkien's verbs put the reader into the middle of a violent storm. Less description makes the image fly by quicker, contributing to the sense of panic. The words in this passage have negative and violent connotations. Bilbo is further along in his journey, and wondering why he ever came to begin with.

And, finally, one final example from The Hobbit:

''In two days going they rowed up the Long Lake and passed out into the River Running, and now they could all see the Lonely Mountain towering grim and tall before them. The stream was strong and their going slow. At the end of the third day, some miles up the river, they drew in to the left or western bank and disembarked. . . it was a weary journey, and a quiet and stealthy one. There was no laughter or song or sound of harps, and the pride and hopes which had stirred in their hearts at the singing of old songs by the lake died away to a plodding gloom. They knew that they were drawing near to the end of their journey, and that it might be a very horrible end. The land about them grew bleak and barren, though once, as Thorin told them, it had been green and fair. There was little grass, and before long there was neither bush nor tree, and only broken and blackened stumps to speak of ones long vanished. They were come to the Desolation of the Dragon, and they were come at the waning of the year.''

This third passage is a long and static one. Tolkien stacks description upon description, letting the reader sit with this image for a long time. The use of words like ''grim,'' ''slow,'' ''weary,'' and ''bleak and barren'' give this mountain a gloomy connotation. Gone is the solemn awe of the first mountain image and the hurried panic of the second; when Bilbo arrives at the Lonely Mountain, he feels he is marching towards his doom, and Tolkien's language makes the reader feel this.

Tolkien's work is powerful and immersive thanks to his masterful use of imagery, or descriptive language that puts a vivid picture in the reader's mind. Imagery is powerful because of its connotation, which is the emotional weight that images carry. This connotation is created through the use of specific, emotionally-charged words, as well as static and passive language.

In Tolkien's The Hobbit, imagery is used throughout the novel, but notably in the way Tolkien describes different mountains: the connotation of the mountain reflects Bilbo's attitude at each point in the novel. Early on, the first mountain Bilbo sees has a solemn connotation, both intimidating and great. A later passage has a hurried panic connotation, as Bilbo begins to wonder why he is on the journey. Finally, the Lonely Mountain is at the climax of the novel and has a gloomy, foreboding connotation.

Create an account
Imagery in The Hobbit
Start today. Try it now
The Hobbit Study Guide

Irony in The Hobbit

The Hobbit by J.R.R. Tolkien Themes & Motifs | What is the Theme of The Hobbit?

The Lord of the Rings vs. The Hobbit by J.R.R. Tolkien | Overview, Similarities & Differences

The Lion, the Witch & the Wardrobe Christian Allegory

The Lion, the Witch & the Wardrobe Themes

Figurative Language in Nothing Gold Can Stay