What do you eat on a regular basis? If your diet consists of a good mix of whole grains, vegetables, fruits, healthy fats, and some form of protein, then it's likely that you're eating a healthy and balanced diet. If, however, your diet consists of potato chips and cookies, you're definitely eating an imbalanced (unbalanced) diet. An imbalanced diet is one that has an excess or deficiency of any dietary part. These dietary parts are likely all familiar to you.

They include the following:

This lesson will go over some potential causes of an imbalanced diet as well as its consequences. 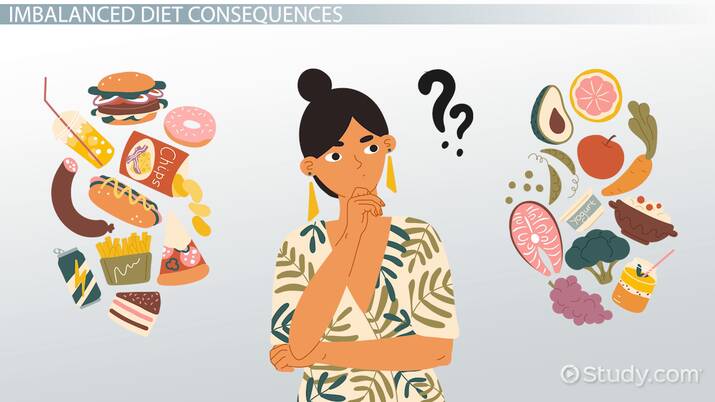 What we don't know about Susan and Mike is what they eat. Mike could be undernourished from a caloric sense, but he might be getting an adequate amount of vitamins and minerals from eating lots of fruits and vegetables. Susan may be getting plenty of calories, but she may be eating the wrong type of food, maybe only junk food, which contains high amounts of fat and carbohydrates. In that case, even though she's eating more food than Mike, she's not getting nearly as wide of a variety of nutrients as he is. So, eating the wrong type of food (or mixture of foods) is another potential cause of a dietary imbalance.

The causes of dietary imbalances aren't limited to picking the wrong food or necessarily due to a lack of knowledge about what to eat. Susan and Mike may know exactly what to eat but still don't do it. Perhaps Susan has a binge eating disorder. On the other hand, Mike may be depressed and, as a potential consequence, may be starving himself. In other words, psychiatric disorders can lead to imbalanced diets. Sometimes imbalanced diets can result from lack of availability of appropriate food or resources to obtain quality food as well.

For others, the imbalanced diet may stem from medical conditions. Some metabolic and endocrine conditions can severely curtail a person's general appetite or restrict their appetite to a select few foods, which can lead to a dietary imbalance.

As you can tell, the causes of an imbalanced diet range from just a lack of good knowledge on what to eat to stay healthy to potentially serious medical disorders to lack of available quality food. The consequences, in all of these cases, can range from almost nothing to life-threatening, depending on the exact cause and/or duration of the imbalanced diet, of course.

For instance, let's say Susan eats a lot of fatty meats, like bacon. She is putting herself at risk of developing high cholesterol and atherosclerosis, which can lead to heart disease, stroke, and early death. Excessive fat intake can also lead to obesity and an increased cancer risk.

Or, let's suppose that Mike isn't getting enough vitamin C or calcium. If he doesn't get enough vitamin C, he may develop a condition called scurvy. Scurvy can cause everything from shortness of breath to bleeding gums, to bruising or yellowing of the skin, to even fatal heart problems. His lack of calcium intake can also have many consequences. Depending on his age, a deficiency of calcium can lead to muscle spasms, memory problems, and brittle bones that can easily break.

Okay, let's now take a moment or two to review. As we learned, it's really important to eat a healthy diet. Basically, a diet that doesn't have a proper mixture of nutrients such as proteins, carbohydrates, fibers, fats, vitamins, or minerals is called an imbalanced diet.

The causes of an imbalanced diet can be anything from a lack of education of what to eat to medical or mental disorders. The consequences are just as varied. An imbalanced diet can lead to a lot of conditions, including things like bone fractures or diseases you likely didn't think were possible outside of the 18th century, like scurvy, which is a condition that occurs due to a lack of vitamin C and can cause everything from shortness of breath to bleeding gums, to bruising or yellowing of the skin to even fatal heart problems. The exact consequences all depend on the underlying cause of the imbalanced diet, the nutrient(s) that is/aren't balanced properly, and the duration of the imbalance.

Terminology of Drug Use, Reactions & Interactions

How the Urinary System Maintains Homeostasis

What is a Balanced Diet? | Balanced Meal Examples

Positive Ways to Deal with Truancy

Techniques to Study the Brain and Behavior