In 1921, the United States Congress enacted the Emergency Quota Act aimed at limiting immigration. Learn more about the definition of the Act through an overview of its background, immigration in early 20th-century America, and the impact of the quota system. Updated: 11/27/2021
Create an account

Land of the Free?

America is a land of immigrants. Does your heritage involve someone coming here from another country? If so, many people can relate to you. In the late 1800s and early 1900s, the United States witnessed a boom in the number of people coming from other countries, also called immigrants. The quantity of those who came was as numerous as their reasons for coming.

Despite our nation tempting immigrants with the American Dream, the U.S. government began restricting the quantity of those who could come into the country. This was done through the Emergency Quota Act of 1921, also known as the Emergency Immigration Act and Immigration Restriction Act. This act restricted the number of new immigrants per year to 3 percent of the number of residents from that country already in the U.S. Let's examine the basis of the act, why it was passed, and the impact it left. 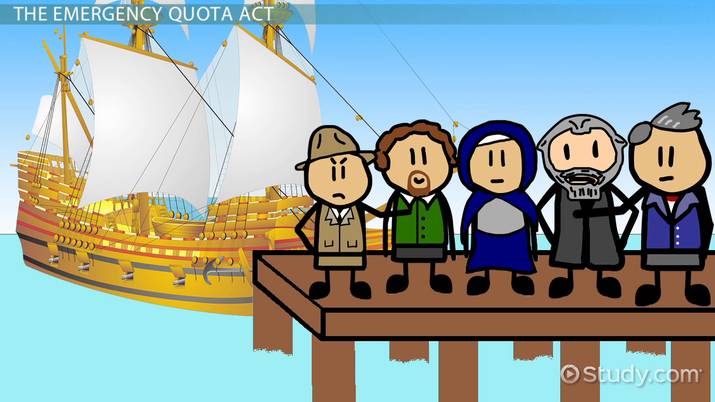 To understand the Emergency Quota Act, one has to know why there were so many immigrants in the first place. Beginning with the Pilgrims (the first settlers) in 1620, religious freedom has always been a reason to come to America. Some also came for better economic opportunities, such as during the Gold Rush, while others simply wanted a better quality of life. Europe in the 1880s through 1920s was not a great place to be, given World War I and other conflicts. Leadership was poor and brutal, and dreams were to be realized by going to the United States. Millions would come, especially during the height of immigration from approximately 1880 to 1920.

So, what spurred the Emergency Quota Act? This question is among the most difficult and diverse to answer regarding the Emergency Quota Act, and there are many reasons why the system was put into place. In the early 1900s, there was a social anti-immigration movement in the United States. People began to push the federal government to restrict the number of foreigners who could enter the country. This is ironic given that there were already many people here that were in fact foreign-born. There was an inherent prejudice and fear against those who were born elsewhere. Known as xenophobia, this fear contributed to the Nativist movement, which believed in rejection of anyone foreign-born.

There were also economic reasons. In 1919, a recession hit the United States. Mainly caused by a decline in the economy after World War I, there was also an increase of the inflation rate. Unemployment was also very high, and many people who were out of work blamed recent immigrants for taking the few jobs that were out there.

Politically, there were reasons as well. In the late 1910s, the U.S. went through the Red Scare, which was inspired by World War I and a revolution in Russia. Many Americans feared a communist rising could occur in this country. Further, it was believed that allowing immigrants from countries that aligned with communist and socialist beliefs would open the floodgates for these ideologies. Once these immigrants arrived, there was no telling how they might convince workers to rise up and revolt. In fact, anarchists (those who want to overthrow the government) were a real problem - to the extent that they were tied to a bombing on Wall Street in 1920. These reasons were enough to push the government to control immigration.

This is not to say that immigrants were bad. At the time, it was accepted that older immigrants were not a problem. But Americans largely believed new immigrants from Southern and Eastern Europe were a tough breed - that they were the ones bringing socialist, communist, and anarchist ideas that would cause nothing but problems. The Ku Klux Klan (KKK) even became involved in opposition to these new immigrants.

With that, in 1921, the Emergency Quota Act was signed into law. This legislation restricted new immigration to 3 percent of the number of residents per year from their country of origin already living in the United States. The 1910 census would be used to determine who was already here. This means that if there were 10,000 Italians in the census, only 300 per year could enter. Not all were part of this new quota system.

Impact of the Quota System

There were many impacts of the quota system. The number of immigrants dropped by nearly 500,000 in its first year. It discriminated indirectly against certain parts of the world, especially Southern and Eastern Europe. The act allowed more people from specific areas, such as Northern Europe, to enter. This was because in 1910, there were more people from that region already here.

Though designed as a short-term fix, the act was renewed and made a fixture in foreign policy until the 1960s. The exact number of immigrants prevented from coming to the U.S. is probably impossible to figure out. American officials who were in Europe after World War I reported that millions wanted to leave and come to the U.S. But given that the law lasted for more than 40 years, the amount is likely more.

The United States was built on the backs of immigrants. Many people can trace their roots to ancestors who came here for a variety of reasons. Though our nation is appealing to the masses, there are times when the government restricts who is allowed to enter. The Emergency Quota Act of 1921 changed national policy on immigration, placing a cap on the number of new immigrants from a certain country at 3 percent of the current population of residents from that particular nation in the U.S. There is no telling how many immigrants were robbed of the American Dream. Nevertheless, this act set a precedent for American immigration policy for years to come.

Public Works Administration & the New Deal | What did the PWA do?

1920s Farm Crisis: History & Significance | What was the Farm Crisis?

Prohibition: What is the 18th Amendment?