This lesson is going to look at something that is being debated very heavily in education. We will look at the positive and negative impacts of digital technology on cognitive skills.
Create an account

If you look around you right now, you probably wouldn't be surprised to see that you're surrounded by digital technology all day every day. Digital technology refers to anything that is computerized. Almost every aspect of our lives are controlled by computers. The music we listen to right now is saved in digital technology formats, whether it's been downloaded or is streaming on a platform like Spotify or Pandora. Most of us walk around with digital technology at our fingertips thanks to our smartphones. The televisions we watch now are even smart televisions.

But with everything around us being so smart, it begs the question: are we still smart? This is a question that keeps coming up the more and more we rely on computers for everything. The question is debated even more when we think about our children that are developing with computer technology being used everywhere they turn. 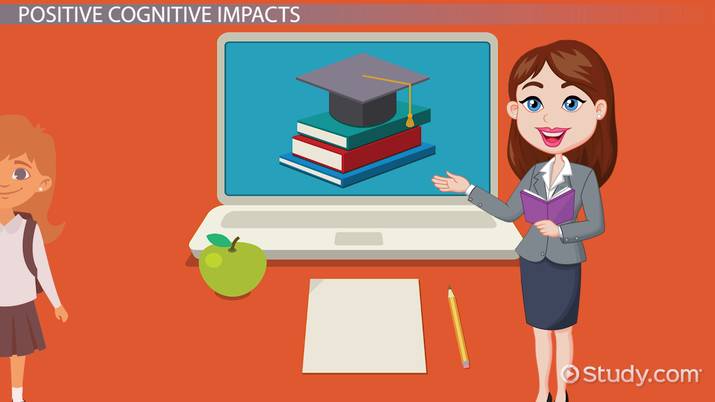 Coming up next: What is Technology Addiction? - Definition & Signs

Children like to play games on computers and on their consoles and, as you probably know, can spend many hours doing so. While this has been looked down upon in the past by people who didn't fully understand video games, studies have started to show that it actually appears to be an advantage for children to play computer and video games. Having to look at images on the screen and analyze what to do seems to help with the development of cognitive skills, or thinking skills. There's also some evidence that this helps with recognizing images in general, which is a necessary skill in nonverbal communication.

Aside from games, children also use computers for learning purposes. Educational software has popped up over time, for examples. Educators have made use of these to rope in children that have grown up knowing nothing other than computers. Most educational software enables children to learn how to identify correct answers. This may indeed help with multiple choice and standardized tests in which the correct answer is readily in front of them.

A lot of beginning cognitive skills are developed during the preschool age period. This is the time when children are at home or in daycares. Digital technology for this age group is aimed at presenting pictures, letters, and numbers to them for them to interact with. Seeing these can help young children learn the alphabet, order of numbers, and names of simple everyday items in ways that they're more likely to find fun.

While there are a few studies that suggest that computers help with cognitive skills, there is also evidence that it has negative impacts on cognitive skills. The first, most obvious deficit that comes up is with verbal skills. Engagement in digital technology doesn't require any speaking or interaction with other people, at least not typically. Because of this, students may be able to recognize correct answers on written tests but may not be able to speak or write out correct answers.

The other negative impact is an extension of the last one. Computers can be used to get answers. The internet has become a source for math and science. Students can simply type in a question or topic, and the computer gives an answer. This potentially takes away the need for students to develop the cognitive skills that allow them to draw conclusions on their own. Without the skill to draw conclusions, the skill to analyze further and think about what logically comes next also does not develop.

Two examples come up quite frequently in our population with some of the simplest computers. First, digital clocks and watches allow children to tell what time it is. When you give the same children an analog clock, they're unable to read the clock to tell time. Calculators are simple computers that give us answers to math problems very quickly. When you take calculators away from children, many of them are not able to do simple math calculations on their own. In fact, many are unable to even set the equation up properly to attempt to get the answer.

Technology in the Early Childhood Classroom

What is Emergent Curriculum in Early Childhood?

Technology in the Preschool Classroom

Resources to Support Emergent Literacy in the Classroom

What is a Color Wheel? - Definition & Types