When a force acts upon an object, it may set that object into motion. The scientific study of moving objects is called mechanics. This lesson investigates the core concepts of mechanics, including inertia, velocity, acceleration, and equilibrium. Updated: 08/28/2021
Create an account

Implications of Mechanics on Objects

Did you know that everything in the universe is moving? Even objects that appear to be completely still are actually moving. Let's do a quick experiment. If you can manage to do so, sit completely still for five seconds. Here, I'll count while we do it. One, two, three, four, five. During those five seconds, you know what? You were actually moving at a speed of about 1,000 MPH. That's how fast the earth is spinning on its axis; therefore, that's how fast you are actually moving while sitting still on your chair. For that matter, the earth is orbiting the sun, and the sun is moving around our galaxy. Wow, that's a lot of motion! So, mechanics - that is the field of science designated for the study of moving objects. Scientists have been studying moving objects for centuries. 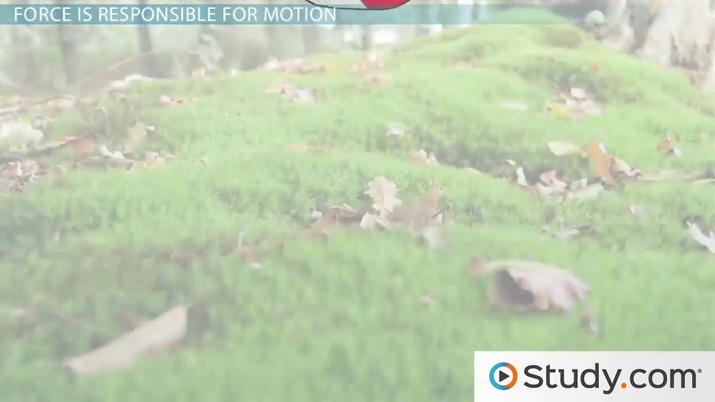 Try it now
Back
Coming up next: Newton's First Law of Motion: Examples of the Effect of Force on Motion

Force Is Responsible for Motion

Now that we've established that everything has motion, let's consider what is responsible for causing that motion. The answer to this question is force. A force is any influence that causes an object to change its shape or motion. There are usually multiple forces acting on an object at any particular time. For example, a ball at rest on the ground is pulled down by the force of gravity and it's pushed up by the force of the earth's surface. Additionally, the air molecules are constantly bombarding the ball on the outside as well as the inside. All these forces have magnitude; that is, they have size. If the forces are acting in the same direction, then they are added together and cause motion to occur in the same direction. If the forces are acting in opposite directions, those forces are subtracted from each other and they cause motion in the opposite direction. The units of force are usually expressed as Newtons in honor of Sir Isaac Newton, who did much to advance our understanding of mechanics.

The study of motion can be simple and not so simple. The simplest movement would be an object at rest, moving in a straight line with a constant velocity. These objects are in a state of equilibrium in which all forces are balanced. Let's consider the computer sitting on the table in front of you. It is at rest as long as the forces acting on it are balanced. The force of gravity pulling down is balanced by the force of the table pushing up on the computer. Should your computer experience an unbalanced force, it will change its velocity. Likewise, a car traveling at 65 MPH west has a constant velocity, as all the forces acting on it are balanced. It's in equilibrium. The force of the car pushing it forward is balanced by the force of friction pushing it backwards. As these forces are balanced, the car's velocity, that is, its state of motion, remains unchanged. The car's velocity will change if the brakes are applied or if you push down on the accelerator.

More complex movements occur when an object changes its direction. This may involve a curved path of motion such as a football thrown into the air to a receiver. The football travels up, forward, and down as influenced by different forces. That's complex!