Alyssa is an active RN and teaches Nursing and Leadership university courses. She also has a Doctorate in Nursing Practice and a Master's in Business Administration.

Explore the importance of good personal hygiene for teenagers. Discover how hygiene affects the health and social life of teens, including the enhanced need for good hygiene due to physical changes during adolescence. Updated: 01/06/2022
Create an account

Looking Good and Being Healthy

While personal hygiene helps to keep teens looking and feeling fresh, it also works wonders in the prevention of sickness, infection, and embarrassment for both males and females. In this lesson, we will look at the importance of good hygiene for teenagers.

Dana, 13, is an avid soccer player, and spends most of her recreational time practicing her field skills. Ever since she hit puberty, or the time in an adolescent's life where hormonal changes take place, she has noticed a foul odor when she sweats during soccer. Alarmed and embarrassed, she makes a visit to the school nurse to ask about her problem. The nurse explains that during puberty, different glands in the armpits and pubic area are triggered and release chemicals that cause a bad odor. The nurse also gives Dana some advice on how to control the sweating and smells, advising her to shower regularly and to use an antiperspirant or deodorant.

Dana keeps up with her body's needs, and pays attention to small changes during this time of growth. Her older brother, Dominick, is a little less attentive. Because he is frequently very tired (which can be common during puberty due to the many changes and growth in the body) Dominick regularly rolls out of bed for school at the last minute. He rarely brushes his teeth, has no time to pack a healthy lunch, and certainly is not up early enough to shower.

Because of Dominick's inattentiveness to his personal hygiene, he develops frequent cavities and is out sick much more than his younger sister. He even experiences frequent fungal infections in his groin, most likely caused from a lack of showering or bathing after gym class. 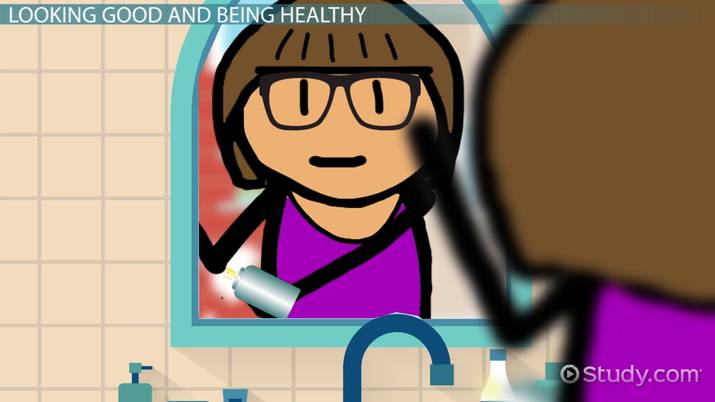 Try it now
Back
Coming up next: Personal Hygiene Lesson Plan for Elementary School

The Teenage Years: Full of Changes

The teenage years are a period of enormous growth and change. This period of time in an individual's life is especially sensitive to physical and physiological changes in the human body. Physical changes occur when appearances, or the outer layer of the body exhibits change that others can visualize. Physiological changes occur when the body produces more hormones that cause different emotions and feelings. Some of these changes are the same for both girls and boys, and some are very different for each gender.

Let's get back to Dana. When she first went to see the school nurse about that stinky smell from her armpits, she learned that the hormone estrogen played a key role in the changes in her body. She also found out that females and males had different levels of various hormones. For Dana, a 13 year-old female, physical changes mean growth in height, breast development, and different patterns of body hair (most typically found in the armpits and groin).

Physiological changes happen within the body, and are more difficult to notice. Some examples of these changes in girls may be an increase in sexual drive, odiferous sweating, mood swings or the onset of menstruation.

Even though Dominick is a year older than Dana, they both seemed to hit puberty at the same time. Dominick is worried about this at first, until he finds out that girls typically begin this phase of life anywhere between 8-12, and that boys generally start later, around ages 10-15.

Dominick learns that the hormone responsible for his changes is called testosterone. He experiences some changes similar to his sister, Dana, like different hair growth patterns, but he also starts to see some totally different physical changes in himself. Dominick develops acne, his voice deepens, he develops pubic, chest, and armpit hair, and he notices growth changes to his penis and testes.

These bodily changes signify the beginning of adulthood, full of highly sought-out characteristics and social norms (expectations). However, side effects of the changes must be closely monitored and controlled with hygiene. For a teen like Dana, hygiene can be described as the maintenance of the physical body and may include, but is not limited to:

For Dominick, his maintenance should include but is not limited to:

As teenagers, both Dana and Dominick are adjusting to amazing, and sometimes scary, changes in their bodies. During this time of physical and physiological growth, hygiene is a critical component of health because it helps to combat against sickness and infection.

Not only does hygiene support immunity from disease, but it also helps the teen adjust to early adulthood by the adoption of social norms. To manage their physical and physiological changes during their teens, Dana and Dominick should practice good hygiene through showering, the use of deodorant, frequent brushing of teeth and washing their faces.

Importance of Personal Hygiene for Children

What is Puberty? - Lesson for Kids

Professional Appearance in the Workplace | Concept and Importance