The art produced under the Roman Republic resulted in several historically significant pieces. See examples demonstrating how sculpting thrived during this time and the inclusion of art throughout the lavish homes in the Roman Republic. Updated: 11/05/2021
Create an account

In 509 BC, the people of the Kingdom of Rome did something rather drastic. They overthrew the king. Even more daring was their determination to never have another king again. To ensure this, the Romans developed a new style of government called the republic, controlled by elected officials who represented the will of the people in the Roman Senate. For nearly 500 years, the Roman Republic thrived until being replaced in 27 BC with their new empire. But for those nearly 500 years, they set the political, social, and artistic foundations for the rest of Western history. 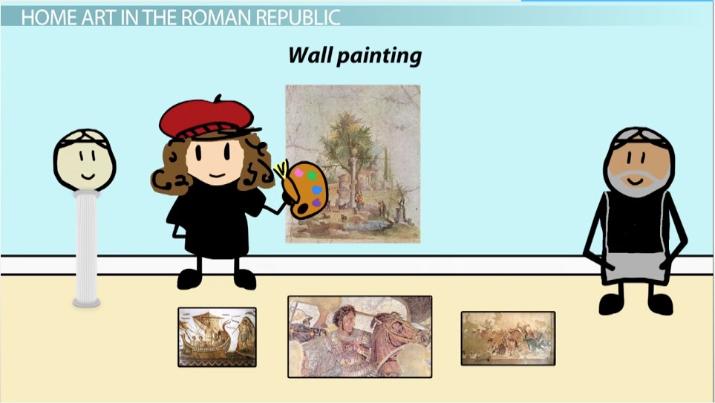 Coming up next: Roman Engineering and Architecture

Sculpture in the Roman Republic

With no king, a new system of government that spread power, and a wealthy class of landowners, art became popular in the Roman Republic. One of the most important styles of art was sculpture. Roman elites, like the Greeks before them, very often paid to have their images sculpted in bronze. However, Roman attitudes about this were very different.

While Greek statues presented an idealized figure, Roman sculptures were true portraits, capturing every wrinkle and dimple and strand of hair. The extreme devotion to a realistic depiction is called verism. Look at this statue of a Roman general, carved around 75 BC. The body is idealized, but the head is not. It is realistic and faithfully records the appearance of this general.

The focus on verism, especially for the head, defined Roman sculpture. In fact, the Romans of the Republic were the first to start commissioning sculptures of just their heads, called 'busts'. The ancient Greeks believed that the head and body needed to remain connected. Ok, yes, most of us agree with this sentiment in general, but in art, the Romans believed that a portrait from the neck up was enough to capture the essence of the subject.

Just look at how different these are. The one on the left is Marcus Licinius Crassus; the one of the right is Gnaeus Pompeius Magnus. Totally different senses of their personalities, right? Look at these ones, portraits of Roman politicians, each one unique. Roman portraits used personal appearance to communicate the values of that person - strength, loyalty, bravery, patriotism, wisdom, or a number of other traits.

Home Art in the Roman Republic

The statues and busts of people were most likely kept in their homes, and if you could afford a portrait bust, then you had a really nice home. So, you'd want to decorate it, right? The Romans decorated their homes with several forms of art, but one of the most prestigious was mosaic, images created by arranging several tiny pieces of colored tiles. Mosaics most often displayed images of Greek history or mythology, showing the increased connection between Rome and Greece at this time. For example, this Roman mosaic from the 3rd century BC is from the Greek legend of Odysseus.

And this one is a battle scene of Alexander the Great.

The other form of home décor that was very popular was wall painting. No better way to brighten up your home than with a wall-sized mural! Wall murals were popular throughout ancient Rome and were embraced by people of all classes, although murals in the homes of the rich were much more complex and better executed.

Of the four main styles of wall murals, the first two were developed during the Roman Republic; the last two during the Empire. The first style is characterized by panels designed to give the impression that the wall was built of marble, not plaster. The second style was more complex, creating illusionistic scenes of people, landscapes, and architecture. The most famous examples of this come from the Villa of the Mysteries, a home buried in Pompeii. Notice how the floor in the painting realistically shrinks into the distance, where it meets a wall? The figures in this are supposed to feel like they are sharing the room with the viewer, so they are painted as being in front of a wall, not part of a wall.

The Roman Republic was the period of ancient Rome lasting from 509 to 27 BC, during which the Romans got rid of their king and created a new style of government. Their artwork was a big part of their society and largely focused around the homes of elite businessmen and politicians.

Portrait sculptures were very popular and the Romans developed their own unique styles by emphasizing the realistic, non-idealized individuality of the subject, particularly when sculpting the head. This extreme realistic portrayal is called verism.

Roman homes were also decorated with mosaics, images made with dozens of tiny tiles. These generally showed scenes from Greek history and mythology. Walls were painted in massive murals. The first style of wall art featured illusions of marble slabs, rather than the actual plaster of the wall. The second style used life-sized figures, landscapes, and scenes of architecture to suggest more space than was actually in the room.

The artistic styles of the Roman Republic went on to influence the entire Roman Empire and, in many ways, all of Western history.

The Iliad by Homer | Summary & Analysis