'Flowers for Algernon' follows the mentally challenged protagonist, Charlie Gordon, through his struggles with low intelligence. See how the story explores themes of intelligence, ignorance, and isolation through Charlie's experiences and quotes in the novel. Updated: 12/28/2021
Create an account

So many questions arise when we begin to examine the issues in Flowers for Algernon, authored by Daniel Keyes. The protagonist, Charlie Gordon, is a man with a very low intelligence quotient (IQ), a number used to express intelligence based on standardized testing. Here, a score of 100 is considered an average intelligence level, while a score under 70 is considered borderline for mental retardation. Charlie's score is 68.

Doctors Nemur and Strauss test Charlie's intelligence in various ways before having him undergo an operation that will increase his intelligence exponentially. Charlie records his experiences, feelings, and thoughts in progress reports. 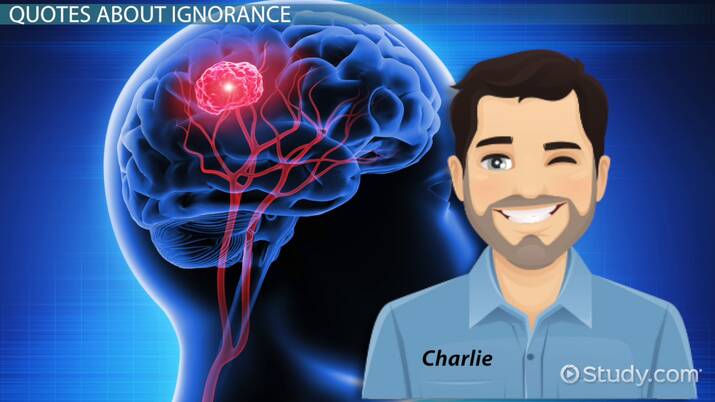 Coming up next: Flowers for Algernon Progress Report 1 Summary

Toward the beginning of the novel, Charlie is asked to take a Rorschach test, which measures a person's personality (said to be linked to intelligence) based on what they see in a pattern of inkblots. Charlie records the experience in his second progress report:

''I dint see nuthing in the ink but he said there was picturs there other pepul saw some picturs. I couldnt see any picturs. I reely tryed to see. I held the card close up and then far away. Then I said if I had my glases I could see better. . . I got them. . . I tryed hard but still I couldnt find the picturs I only saw the ink. I told him maybe I need new glases.''

Charlie's first-person perspective provides the reader with some insight into his thoughts. This incident serves to illustrate Charlie's initial level of intelligence, whereby he seems to lack imagination and interprets concepts literally. If he could only have glasses, he would be able to see the pictures better. When Charlie is asked to continue his pre-operation tests, he performs a race in a maze against Algernon, the lab's test mouse. His response is as follows:

'Anyway that test made me feel worser than all the others because they did it over 10 times with difernt amazeds and Algernon won every time.''

The transformations in Charlie's intelligence throughout the course of the novel change the dynamics of his friendships and allow him to explore whether it's better to be aware or unaware of how others perceive him. Shortly after his operation, Charlie displays a sense of ignorance, or lack of understanding, about his interactions with his friends Joe Carp and Frank Reilly:

''Joe Carp said hey look where Charlie had his operashun what did they do Charlie put some brains in. . . Then Frank Reilly said what did you do Charlie forget your key and open your door the hard way. That made me laff. Their really my friends and they like me. Sometimes everybody will say hey look at Joe or Frank or George he really pulled a Charlie Gordon. I dont know why but they always laff.''

After the operation begins to take effect, Charlie becomes more aware of the true dynamics between himself and others. Frank and Joe trick him into drinking alcohol, and he makes a fool of himself dancing with one of the women. He writes ''I didn't know what to do or where to turn. Everyone was looking at me and laughing and I felt naked. I wanted to hide myself. I ran out into the street and I threw up. Then I walked home. It's a funny thing I never knew that Joe and Frank and the others liked to have me around all the time to make fun of me. Now I know what it means when they say 'to pull a Charlie Gordon.' I'm ashamed.''

Charlie's post-surgery increase in IQ allows his naive ideas of friendship to progress from thinking his ''friends'' are laughing with him to understanding that, in reality, they are laughing at him. This quote helps to establish the idea that there may be such a thing as being too aware or intelligent.

A larger question of ignorance is addressed through Charlie's cyclical experiences with his IQ levels, when he makes comments like, ''How was I to know that a highly respected psychoexperimentalist like Nemur was unacquainted with Hindustani and Chinese. It's absurd when you consider the work that is being done in India and China today.'' Charlie's attitude toward others becomes much less tolerant as he comes to consider himself above them intellectually. Socially, though, he remains ignorant of how to interact with others.

After Charlie's personality begins to change as a result of his increased intelligence, most of the workers at Donner's Bakery sign a petition asking that Charlie leave his job because he makes others feel uncomfortable. A conversation with Fanny, one of the only employees that didn't sign the petition, reveals that she thinks there's something ''mighty strange'' after the operation and that Charlie ''used to be a good, dependable, ordinary man--not too bright maybe, but honest.''

Charlie responds, ''How can you say that, Fanny? What's wrong with a man becoming intelligent and wanting to acquire knowledge and understanding of the world around him?''

By the end of the novel, Charlie's intelligence reverts back to his original IQ level. As he begins to regress, he states, ''It's a strange sensation to pick up a book that you've read and enjoyed just months ago and discover that you don't remember it. I got so angry I threw the book across the room.'' Charlie also emphasizes his feelings of isolation when he says, ''I'm the only person in the world who can describe what is happening'' to his mind.

The idea of being laughed at by others comes full circle as Charlie writes in his final goodbye letter, ''Its easy to make frends if you let pepul laff at you. Im going to have lots of frends where I go.''

Let's review. Flowers for Algernon by Daniel Keyes is a novel about the experiences of a man named Charlie with a low intelligence quotient who's used as a test subject in an experiment designed to increase intelligence. Charlie is asked to take a Rorschach test, which measures a person's personality based on what they see in a pattern of inkblots, a test he believes he would have done better on if he'd had glasses. As Charlie's intelligence increases and then tragically decreases, he expresses his feelings about intelligence, ignorance, and isolation through a series of progress reports. These reports also illustrate his awareness of his interactions with and understanding of others, like Charlie's coworkers, Doctors Nemur and Strauss, Joe Carp and Frank Reilly, for example, when he finally understands what his friends mean by ''pulling a Charlie Gordon.''