Millie is currently working in tertiary education, whilst completing her master's degree in English Studies.

The American Dream is a common theme in literature and media, including Truman Capote's 'In Cold Blood.' Live the American Dream from the contrasting perspectives of the Clutters and Dick and Perry through their quotes in Capote's novel. Updated: 01/05/2022
Create an account

The American Dream: the belief that anyone in the United States, regardless of their background, can improve their social standing through hard work. But what does Truman Capote's In Cold Blood suggest about this ideal? Well, one way of approaching this question is to look at quotes from the novel.

Consider, for example, the following quote from after the Clutters' murders. In what ways did Mr. Clutter's life represent the American Dream? And what are the implications of his death?

'''Everything Herb had, he earned—with the help of God. He was a modest man but a proud man as he had a right to be. He raised a fine family. He made something of his life.' But that life, and what he'd made of it—how could it happen, Erhart wondered as he watched the bonfire catch. How was it possible that such effort, such plain virtue, could overnight be reduced to this—smoke, thinning as it rose and was received by the big, annihilating sky?'' 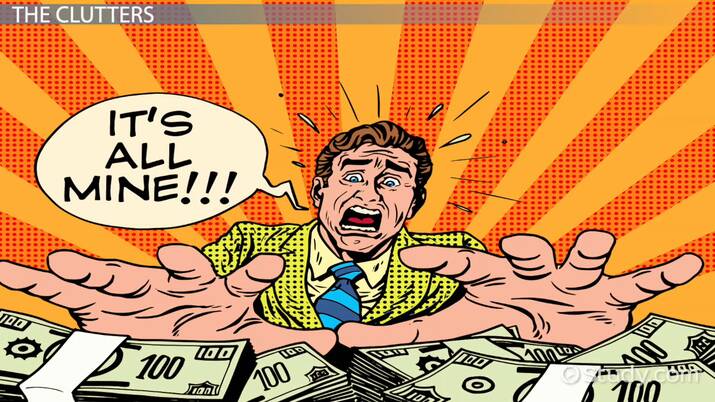 Coming up next: In Cold Blood Quotes About Family

As you might have sensed from the previous quote, the Clutter family is presented as having achieved the American Dream. Consider, for example, what Capote is telling us about Mr. Clutter in the following extract:

''The son of a farmer, he had from the beginning aimed at operating a property of his own...the upstart's experiments succeeded—partly because, in the beginning years, he labored eighteen hours a day. Setbacks occurred—twice the wheat crop failed, and one winter he lost several hundred head of sheep in a blizzard; but after a decade Mr. Clutter's do-main consisted of over eight hundred acres owned outright and three thousand more worked on a rental basis—and that, as his colleagues admitted, was 'a pretty good spread.'''

From this extract, two things are clear. First, Mr. Clutter's success is attributed to his hard-working nature and persistence. We also see how the American Dream is linked to material wealth. However, in the form that the Clutters represent the American Dream, the focus is more on good moral values than material wealth, as the following quote shows.

''Feeling wouldn't run half so high if this had happened to anyone except the Clutters. Anyone less admired. Prosperous. Secure. But that family represented everything people hereabouts really value and respect, and that such a thing could happen to them—well, it's like being told there is no God. It makes life seem pointless.''

The fact that the Clutters, despite their virtues, lost their lives, causes the community to question the value of such virtue in a society where others can destroy it ''not out of vengeance or hatred. But for money.''

In reflecting on Perry Smith and Dick Hickock's ambitions, the connection between material wealth and the American Dream becomes more problematic, however. Consider, for example, the following quote about Perry's ideals.

''Since childhood. . . a longing to realize an adventure his imagination swiftly and over and over enabled him to experience: the dream of drifting downward through strange waters, of plunging toward a green sea-dusk, sliding past the scaly, savage-eyed protectors of a ship's hulk that loomed ahead, a Spanish galleon—a drowned cargo of diamonds and pearls, heaping caskets of gold.''

Capote characterizes Perry as someone who hoped to succeed through good fortune. However, as is clear from this later extract, these dreams never materialize and Perry finds himself in the same position he was in as a child.

''Things hadn't changed much. Perry was twenty-odd years older and a hundred pounds heavier, and yet his material situation had improved not at all. He was still (and wasn't it incredible, a person of his intelligence, his talents?) an urchin dependent, so to say, on stolen coins.''

Because of what Perry sees as ''fate'' in the form of ''bad company,'' he turns to crime as a means of achieving his goals. In this, Dick's greed is most strongly tied to the tragic deaths in the novel.

''Dick, who wanted 'a regular life,' with a business of his own, a house, a horse to ride, a new car, and 'plenty of blond chicken.' It was important, however, that Perry not suspect this—not until Perry, with his gift, had helped further Dick's ambitions.''

Here we see how Dick, who often considers salaries offered to be too little, sees violence as power and a way to succeed in life, believing that: ''With a knife in his hand, he, Dick, had power.''

In Cold Blood contains two different perspectives on the American Dream. Some, like Perry's sister believes it is attainable (if you're willing to work) as her letter to Perry states:

''I do admit that you are intelligent and your vocabulary is excellent & I do feel you can do anything you decide to do & do it well but what exactly do you want to do & are you willing to work & make an honest effort to attain whatever it is you choose to do? Nothing good comes easy and I'm sure you've heard this many times but once more won't hurt.''

Since Perry's sister, despite having a similar childhood to Perry, is able to achieve the American Dream, Capote encourages us to reflect on the reason why some people turn to crime in order to make this happen.

The American Dream in In Cold Blood

Where characters like Mr. Clutter demonstrate that hard work and persistence can help one achieve the American Dream, Dick and Perry's actions demonstrate why some people might fail at achieving their goals.

In this, the link between material wealth and the American Dream might lead to greed. And since Perry and Dick lack certain moral values, these characters corrupt this dream and lead some to see life as pointless, since others can so easily destroy all one has achieved.

All right, let's take a moment or two to review. As we learned, per the belief that's known as the American Dream, anyone in the United States, regardless of their background, can improve their social standing through hard work. From the quotes presented earlier in this lesson, we see how the Clutter family was able to achieve the American Dream through Mr. Clutter's hard work and strong moral values. However, their murders cause people to question this dream in a corrupt society. By presenting two contrasting perspectives, one which views the American Dream as achievable, and another that suggests that the materialism attached to this ideal might lead to greed, Capote shows the American Dream as something that might not only motivate people to work hard, but as that which could also corrupt people and destroy lives when it leads to greed.

The American Dream in In Cold Blood

The Death Penalty in In Cold Blood

Rhetorical Devices in In Cold Blood

The Easter Offensive of 1972: North Vietnam Attacks the South

Satire in The Great Gatsby

Revenge in The Crucible

Into the Wild & Transcendentalism

Hypocrisy in The Crucible