This lesson examines the short story ''In the South'' by British Indian author Salman Rushdie. We'll learn about the main characters and their tricky relationship. Then, we'll explore the themes and imagery in the story.
Create an account

The World According to Rushdie

British Indian author Salman Rushdie's short story ''In the South'' was published in The New Yorker in 2009. It tells of the lives of two old Indian men who have much in common and much that sets them apart. In the story, Rushdie explores themes of identity, family, and death. He begs the question of how one should define a life well-lived.

The story takes place in late 2004, after Christmas and just before New Year's Eve. Though Rushdie does not explicitly identify the setting, he provides details that allow readers to discern a south Indian location: the city of Chennai. 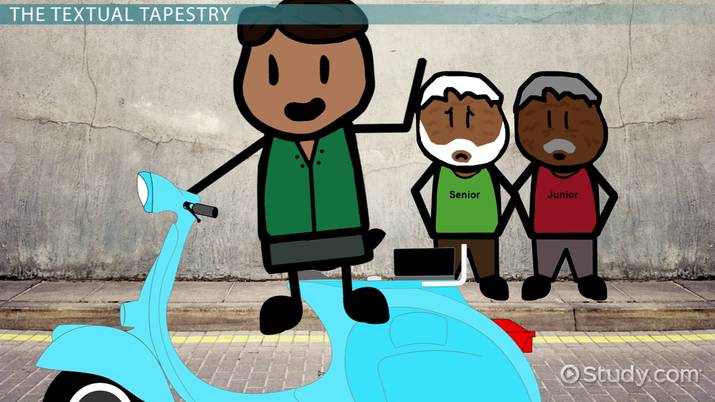 Coming up next: Gorse is Not People by Janet Frame: Summary & Analysis

No simple plot synopsis can do Rushdie's expressive prose justice. This wordsmith conveys meaning in sentences that amount to more than a combination of words; it's more like a textual tapestry. In this short fiction, the author contemplates the meaning of life and death through the eyes of two octogenarians, or people in their eighties. Through these two men, Senior and Junior, Rushdie explores dichotomies, or two things that contrast sharply or are entirely different, including:

One sentence sums up Rushdie's point: ''Death and life were just adjacent verandas.''

Rushdie describes Senior and Junior as if they were two halves of the same whole, but they also couldn't be more different. New Year's Eve is approaching. In a few days, it will be 2005. Thoughts of the future make Senior depressed:

'' 'Either I will die in the next five days, meaning that there will be no new year for me,' he told Junior, 'or else a year will begin in which my end will surely come, which is hardly a thing to look forward to.' ''

Junior and Senior watch the youth on the street speeding about on their Vespa scooters. Senior observes, ''Life was cheap, like a garment idly flung away after a single use, like their music, like their thoughts.'' This is when life changes irrevocably for both men. The scooter races just a little too close to the curb, and Junior falls back onto the sidewalk. Junior dies instantly. At this moment, the story's thematic dichotomies come to fruition: youth and death butt heads.

Junior and Senior have a lot in common, but they couldn't be more different. They're practically attached at the hip, and they share a pleasure in bickering. They're both eighty-one years old, and they have the same first name. Rushdie never tells us more than the fact that their name starts with a V. Senior is seventeen days older than his Junior.

Senior has lived a full life, but this only makes the old man miss the good things. He traveled in his youth and became a successful athlete. He has a large family, but his nine brothers have all passed away. After his first wife passed away, Senior stubbornly remarried. His second wife, Aarthi, now annoys him more than anything else. They are passively aggressive toward each other. When his children and grandchildren visit, they shudder at his morbid comments. His losses and disappointments just make him feel lonely. He's tired, and he's ready to die.

Even though Junior has only a small family and few friends, he finds ways to enjoy life. He hasn't experienced the same success as Senior, but he looks on the bright side. ''The discovery of his affliction with the incurable disease of mediocrity might have cowed a less ebullient spirit, but he remained bright-eyed, with a ready smile for the world.'' Overall, his life has been ordinary. He never married. He sat on the sidelines more often than not.

Senior and Junior both have a ''grass is always greener on the other side'' mentality, represented by the partition separating their verandas. Senior has had so much success, and the loss of it makes him feel let down. Junior has been unsuccessful, but his strive has fueled in him a passion for living.

Rushdie imbues his prose with rich indications of the thematic connections between identity, place, and environment. The most evocative example of this is in his descriptions of death, which recall images of both fire and water. About Senior, the narrator explains, ''His friends had gone up in flames one by one.'' ''Of his two hundred and four family members, quite a few had already gone to their fiery rest.'' The tsunami brings these images to fruition: a massive wall of water that washes away life and leaves death in its wake. ''Senior did not like the Japanese word everyone used to name the waters of death. To him the waves were Death itself and needed no other name.'' Life is the flip side of death just as fire is opposite of water. Just as fire and water are paradoxical counterparts, so too are Senior and Junior opposites that attract. Water extinguishes fire, but without the water the world would become engulfed in flames. Stated another way, life exists in a balance, but that balance is paradoxical in many ways.

Salman Rushdie's ''In the South'' was published in The New Yorker in 2009. It tells the story of Junior and Senior, two octogenarians who live in adjacent apartments in Chennai in south India. The story takes place in late 2004 at around the same time as the tsunami decimated the island of Sumatra in the Indian Ocean.

Junior and Senior represent dichotomies in terms of life and death, youth and old age, hope and defeat, success and mediocrity, and luck and misfortune. Comparing and contrasting the lives and outlooks of these two fellows begs the question of how to define a life well-lived. They are poster boys for the ''grass is always greener'' mentality.

Gorse is Not People by Janet Frame: Summary & Analysis

A Good Man is Hard to Find: Characters & Setting

Setting of The Yellow Wallpaper

The Cask of Amontillado: Plot Diagram

The Story of an Hour: Theme & Symbolism

Who is Jane in The Yellow Wallpaper?