Across nearly every society, there are three main rules that have governed marriage: incest, exogamy, and endogamy. Learn more about the definitions of incest, endogamy, and exogamy, and review examples of each. Updated: 10/20/2021
Create an account

Movies and TV dramas have done a pretty good job of convincing the Western world that marriage takes place when a guy and a girl fall in love from across a crowded room. Then, after a series of mishaps and reconciliations, they walk into the sunset, forever starry-eyed and in love. Although this makes for a great chick flick, it's really not the way marriage occurs in most of the world.

On the contrary, marriage across the globe is usually regulated by the rules and structure of a society. Three of these rules are the rules of the incest taboo, exogamy, and endogamy. In today's lesson, we will seek to break down these rules and give some examples of them from around the globe. 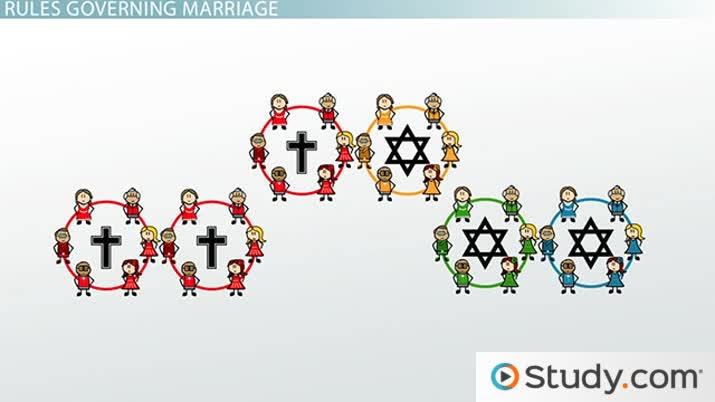 Coming up next: Bride Price, Dowry & Other Economic Marriage Customs

Because incest taboos are found in all cultures, we'll start with this topic. As the name implies, an incest taboo prohibits sexual intercourse or marriage between different categories of kin. In speaking of the incest taboo, anthropologists note that no modern society allows the marriage of mother to son, father to daughter, or sister to brother.

In our more modernized culture, this taboo has grown to include extended family relationships as well. For example, cousins don't marry cousins. This is also an example of the incest taboo.

Still, it should be noted that some past societies did allow marriage between these now prohibited groups. However, even in ancient times, these marriages were usually only reserved for royal families trying to keep the reins of power tightly within their bloodline. A great example of this is Cleopatra, who's believed to have been married off to at least two of her brothers.

Our next governing rule of marriage is exogamy. Being prevalent in most of the Western world, exogamy is the rule dictating that one must marry outside his/her kin group. However, in some cultures, exogamy can also extend to forbid marrying within one's own community, tribe, or village. Playing on words to make this one a bit easier to remember, exogamy states that one must exit his group in order to pick his bride!

Anthropologists often assert that this is done in areas in which cooperation between differing tribes is necessary for survival. For instance, if one tribe only hunts, and another tribe only plants, the best way for them to ensure sharing is to marry off members of their society to one another.

An excellent example of exogamy, cited by the work of Carol and Melvin Ember, is the Rani Khera village of India, in which women from both far and near villages travel to Rani Khera to marry its men. Again, citing the work of the Embers for another example, the average !Kung tribesman of Africa travels at least 40 miles to find a wife. And we Westerners think long-distance relationships are a drag! Imagine 40 miles in the heat of Africa or India!

Our last rule governing marriage is endogamy. Sort of as exogamy's opposite, endogamy dictates that a person must marry within his/her certain group. Unlike exogamy, which says you have to exit your group to pick a bride, endogamy says you have to stay in it! Not just limited to biological or community relationships, endogamy is seen across the globe. It's witnessed as certain religions require their followers to only marry within their faith, or as a wealthy dad insists his daughter only marry a boy from what he'd consider the upper crust.

Apart from these examples, a more concrete example is found in the traditional caste system of the Tamil society of Sri Lanka. Within this group, marrying outside one's social class is strictly forbidden and will, at the very least, cause immense shame, if not violent acts against the inter-married couple.

Across the globe, there are three main rules that govern marriage. They are the incest taboo, exogamy, and endogamy.

The incest taboo prohibits sexual intercourse or marriage between different categories of kin. Although some ancient cultures allowed these marriages as a way for royal families to maintain control, anthropologists assert that the incest taboo is part of every culture in the world of today.

Exogamy is the rule dictating that one must marry outside his/her kin group. In many less industrialized cultures, exogamy can also extend to forbid marrying within one's own community, tribe, or village. This is often done to promote cooperation among people groups.

Last is endogamy, which dictates that a person must marry within a certain group. Not limited to simply family relationships or communities, endogamy extends to other areas, such as religion, social caste, and wealth.

When you finish the video, you should be able to: