Shaun is currently an Assistant Professor of Mathematics at Valdosta State University as well as an independent private tutor.

In this lesson, you will learn about the indefinite integral, which is really just the reverse of the derivative. We will discuss the definition, some rules and techniques for finding indefinite integrals, as well as a few examples.
Create an account

Let's introduce a more convenient notation to stand for this concept. This is where that funny-looking long S symbol comes in.

That symbol, together with its partner, the differential (dx, dt, dy, or similar, depending on the variables in the problem), are instructions for finding the indefinite integral (antiderivative) of a function f.

The C is called the constant of integration. It is just an undetermined constant that gets tacked on to the antiderivative. But why? You might remember from the rules of differentiation that the derivative of any constant is simply 0. This is why we write + C because there is no way of knowing ahead of time what the constant term in the original function really was.

Now if the definition doesn't seem clear yet, don't worry. In the next few sections, we will see what this all means. First, a motivating example. 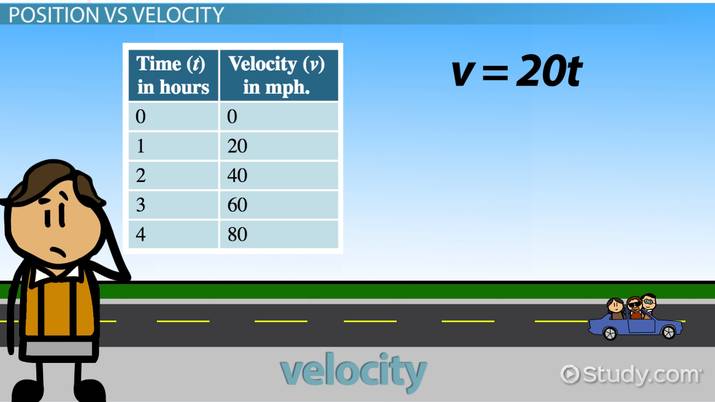 Let's suppose you take a trip in your car, and your speed (or velocity) is known. Maybe your friend in the passenger seat has been looking at your speedometer and has written down the speed every hour for a total of four hours.

Based on the table, it seems like v = 20t mph. Can we figure out how far we've traveled? Sure we can: with calculus! More specifically, we will use an indefinite integral.

The key calculus concept is that velocity is the derivative of position. That is, v(t) = s' (t). So s is an antiderivative of v. Can you guess a function s(t) whose derivative will be 20t? If you guessed s = 10t^2, then pat yourself on the back.

Technically, we should also include the constant of integration, so the most general way we could express the position function s(t) would be:

However, we can safely ignore the C for a problem like this because we are only interested in the change in position.

Now, let's answer the original question: How far did you and your friend travel? Let's keep track of position by plugging the corresponding t value into the position function s(t).

Finding antiderivatives in general is a tricky business. However, certain rules can guide us along. Two of the most important rules are the constant multiple rule and the power rule for antiderivatives.

The constant multiple rule states that any constant multiple may be pulled out of the integral, while the power rule tells us how to integrate expressions that are powers of the variable, such as x^2, t^3, and z^(-1/2).

In fact, these two rules were what we used to find the antiderivative of 20t.

The sum rule is another extremely useful tool.

There are many other antiderivative rules, so many in fact that we don't have the space to write them here. That's for other lessons.

Let's do a few examples together. Try to identify where we used each rule, but we will also review each step afterward. You may want to refer to a table of integral formulas, found in most calculus textbooks or online. Let's start with this equation:

First, we use the sum rule, then the constant multiple rule, then the power rule (with n=3) and the rule for antiderivative of cos x. Then just clean it up a bit.

Now let's try this one:

Perhaps some of these antiderivative rules we used in the examples seemed to come out of the blue. But the more experience you gain with indefinite integrals, the more you will discover and use the appropriate rules.

The C is called the constant of integration and is simply part of the form of the antiderivative. There are certain rules that help us find indefinite integrals, including:

How to Calculate Integrals of Exponential Functions

How to Integrate Functions With Partial Fractions

How to Calculate Integrals of Trigonometric Functions

The Fundamental Theorem of Calculus

How to Find Volumes of Revolution With Integration

Rolle's Theorem: A Special Case of the Mean Value Theorem

The Sword of Damocles: Lesson for Kids