Copyright
Lesson Transcript
Instructor: Amanda Fay
Situated between the Indian subcontinent, Africa, and Australia, the Indian Ocean is the world's warmest and third-largest ocean. Learn about its location, explore its unique water circulation, and discover facts about its recent history. Updated: 10/21/2021
Create an account

While roughly 70% of Earth is covered by the world's four oceans, the Indian Ocean is the most unique ocean due to its seasonal circulation patterns, warm temperatures, and abundance of oil deposits. In fact, it's the warmest of all the oceans. The Indian Ocean also has been highlighted in the news several times in the last few years beginning with the devastating earthquake and resulting tsunami in 2004, the missing Malaysian Airlines jet thought to be lost somewhere in the Indian Ocean, and lastly regarding the increase in pirate activity in the waters off of Africa in the late 2000s. So, let's learn more about this dynamic ocean! 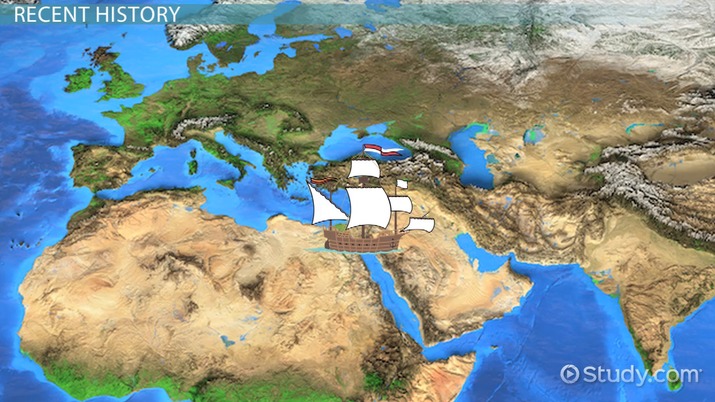 Coming up next: Oceans: Facts & Information

The Indian Ocean is bound on the north by Asia, including the country of India for which it's named, on the west by Africa, and on the east by Indonesia and Australia. It extends southward to the continent of Antarctica. South of the equator, the Indian Ocean circulates in a counter clockwise direction. In the northern portion of the Indian Ocean, however, the monsoon, a seasonal wind reversal found in tropical areas, dominates the circulation patterns. This is the only place in the world where this phenomenon happens!

In the summer, the land heats up more than the ocean, causing surface wind to blow from the cooler ocean onto the warm land. The wind carries moist air from the Indian Ocean in a northeastern direction into India. This pattern brings lots and lots of rain to the Asian continent as water that's evaporated from the ocean gets carried onto land, where it gets released. In the winter, the wind pattern reverses and the land cools and the ocean is now warmer than the land, causing wind to blow southwest from the land as it heads out to sea. Winters are typically associated with clear skies and dry weather in the land areas north of the Indian Ocean. Although the monsoon circulation shift occurs each year, its starting time is highly unpredictable - as is its intensity.

During early exploration, the Indian Ocean's relatively calm waters opened the area to trade earlier than the Atlantic or Pacific Oceans, as did its smaller size. The powerful monsoons were also a benefit, as they allowed ships to easily sail west, then wait a few months and return eastwards when the wind shifted. The Suez Canal, which opened in 1869, connects the Indian Ocean to the Mediterranean Sea, and thus the Atlantic Ocean. The canal allowed ships to travel between Europe and Eastern Asia without having to go all the way around Africa, which cut the travel distance by over 4,000 miles! Today, over a third of the world's offshore oil production comes from the Indian Ocean, and it's known to be very rich in mineral resources.

Just after Christmas in 2004, an earthquake occurred within the Indian Ocean, causing a catastrophic tsunami. More than 200,000 deaths occurred in the countries surrounding the Indian Ocean. Also, in the late 2000s, pirate activity erupted in the Indian Ocean due to dire living conditions in the Somali coastal areas. Within a few years these attacks steadily declined due to active private security and international navy patrols in these waters.

Located between Africa, Asia, and Australia, the Indian Ocean is a unique part of the world, where warm water temperatures and shifting wind patterns cause monsoon conditions that greatly affect weather patterns in the area. Warm temperatures over land in the summer result in onshore winds and rain, while cooler winter temperatures bring clear skies. Earthquakes are another common occurrence and can often cause dangerous tsunamis which affect the surrounding areas, especially the islands in the eastern Indian Ocean.

Topography Formation & Reshaping | What is Topography?

Evolution of Animals Stages & Examples | How Did Animals Evolve?