Captain Perfect is the ideal superhero/employee for any company. He is not only brilliant, but he's capable of lifting entire factories with one hand. He can solve computer algorithms in 10 seconds and can complete his daily work in one hour. Unfortunately, Captain Perfect does not exist in the real work world.

Intellectual brilliance, physical strength, and common sense are three examples of highly sought-after abilities within certain companies. Ability is an individual's capacity to master numerous tasks in a job. Organizations need to identify key abilities of employees that will lead to success, and employees need to have certain abilities that will make them a valuable addition to an organization.

Finally, managers need to understand what abilities will lead to a good job fit with certain employees. Rodney Rico is a manager at Messy Chocolates. He has both the individual intellect and physical abilities to become a rising star within the organization. The human resource department has identified him as a key employee and will do everything to keep him satisfied with his career at Messy Chocolates. 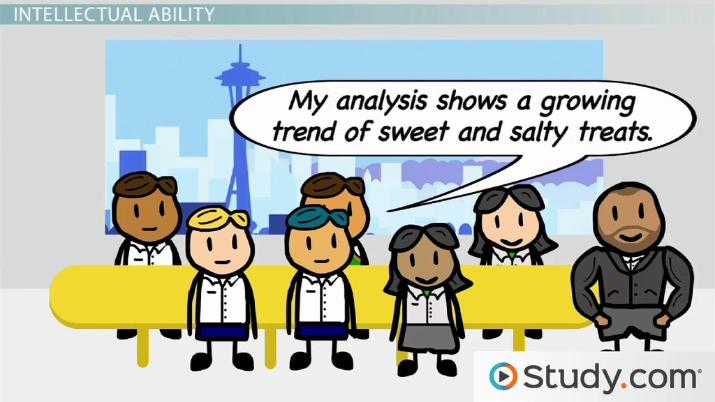 Coming up next: Self-Concept & Self-Esteem in Organizational Behavior

Companies view intellectual ability as one of the most valuable attributes in employees. This ability deals with mental capabilities such as excellent memory, verbal comprehension, reasoning, analyzing, and problem solving, which are all important elements of worker skill in companies.

Certain jobs require more intellectual ability than other types of jobs. For example, a factory worker that sews the same piece of pants each hour and day requires minimal intellectual ability. An employee such as Rodney requires a higher level of intellectual skill. He must communicate with different levels of management and look for creative ways to solve sales issues. He is also responsible for financial reporting, analysis, and sales presentations.

In general, it has been found that employees with more intelligence are usually more creative and can adapt to change and solve problems quicker. Rodney came up with an idea at a weekly meeting to make a chocolate bar with potato chip pieces embedded. He felt that his analysis showed a growing trend of sweet and salty treats. His bar was produced for the market and ended up being one of Messy Chocolates' best-selling candy bars.

One issue that companies have to be aware of about employees with high intellectual abilities is that those abilities do not necessarily translate to better job satisfaction, due to the fact that most high-intellect people are highly critical of their work.

Companies should be smart and post exact physical requirement skills needed for a job. The downside to physical jobs is that employees have a higher chance of physical injury and job absenteeism and may cost the company more for medical claims. Rodney's first job out of college was loading boxes for a local moving company. His superiors were more impressed with his physical abilities than his intellectual abilities at that point in his career.

Organizations need to identify key abilities in employees that will lead to success, and employees should have certain abilities that will make them a valuable addition to an organization. Intellectual and physical abilities are two key skill sets that organizations look for employees to have depending on the job requirements. Memory, comprehension, reasoning, analyzing, and problem solving are examples of intellectual skills that companies desire for their workers. Strength, stamina, coordination, psychomotor, and sensory skills are the top elements needed for physical work.

Narcissism in Organizations: Definition, Characteristics & Effects on the Workplace

What is Racial Discrimination in the Workplace? - Examples, Statistics & Cases