Science is not about thoughts, feelings, wishes, and fantasy. Scientists don't attribute their findings to numerologists, psychics or forces beyond human understanding (although quantum physics has some funky stuff). Science is about examining reality in an objective way, drawing conclusions from evidence or observation. 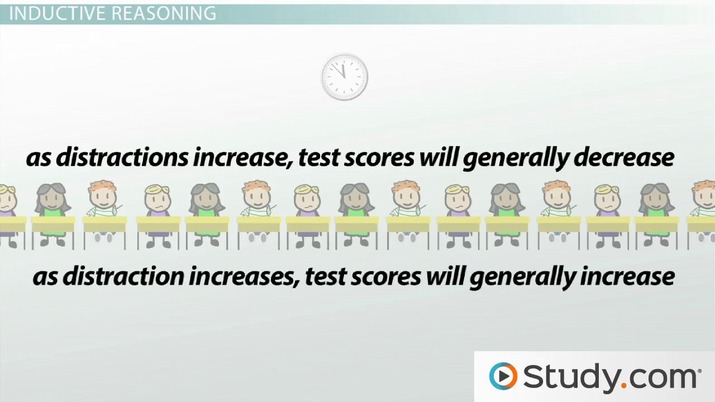 Inductive reasoning is the more common way that scientists conduct experiments. Scientists have an idea of something to study more in depth. Then they go and collect data through experiments, observations, or surveys. With all of the data in hand, they analyze it to draw out conclusions.

Inductive reasoning is about collecting data and seeing what patterns or meaning can be extracted. A researcher, let's say you in this example, was taking a test and noticed that this fly kept buzzing around. It buzzed around your head and it was distracting you. So you wonder if noise distraction has any effect on test taking. You will then set up an experiment involving 100 people taking a test with some noisemaker in the background. The people will be divided into five groups of 20, and each group will have a different level of noise, from quiet to obnoxiously loud.

After all five groups have completed the tests you will compare their different scores to see if there was a difference. If the scores typically grew steadily worse as the noise increased, then you could draw a conclusion that as distractions increase, test scores will generally decrease. If, on the other hand, the majority of their scores increased with the noise, then you would make the correlation that as distraction increases, test scores will generally increase. To reiterate, inductive reasoning draws conclusions from evidence.

Let's say every time you run the experiment with the noise making and test taking you find that as noise increases, the test scores decrease. Your observations, however, indicate that two or three people per group do substantially worse in quieter conditions but extremely well in very noisy conditions. When you look at their demographic information, you see that most of them admit to having Attention Deficit Hyperactive Disorder, or ADHD.

After watching this lesson, you should be able to compare and contrast inductive and deductive reasoning in terms of psychological experiments.

What are Logical Fallacies? - Define, Identify and Avoid Them

How to Write a Thesis Statement

How to Identify and Use Premise and Conclusion Indicator Words