We communicate with all sorts of people, so what makes families any different? In this lesson, we are going to look a bit closer at communication within the family and discover what sort of influences play into how, when, and why we even try.
Create an account

This is a family. So is this, and this. Actually, these are all families. People connected to each other are, at the most fundamental level. Across the world, families look different but they do have a few things in common. For one, they can all drive us crazy and, for two, they all have unique systems of communication. You see, we communicate with all sorts of people throughout our lives but those communications are always distinct to that relationship. We communicate one way with friends, one way with co-workers, another with strangers. But families? Well, family communication may be the most important of all. Many social scientists consider the family to be the base unit for all of society, the building block of all social relationships. 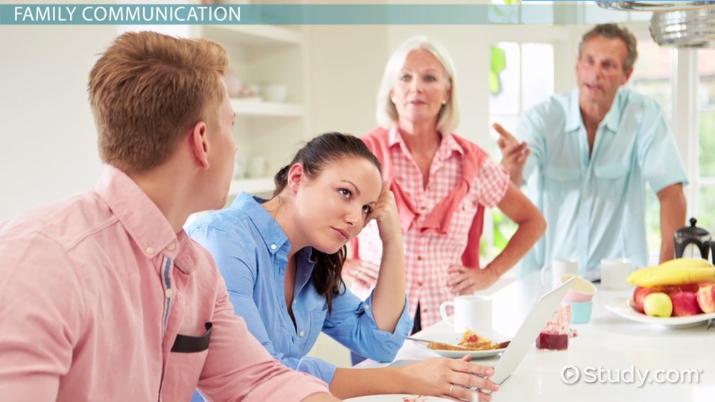 You learn first through your family cultural values, self-identification, social roles, gender expectations, and yes, even communication. So, how families communicate is important, and there can be several influences on what this looks like. Let's start with one of the most basic, culture. Culture influences all things, so it's no surprise to learn that different cultures have different beliefs about how families should communicate.

We've got two families here from two different cultures. So, let's look at their communication habits, starting with communication orientation, or degree of interaction between family members. The family on the left comes from a high conversation orientation culture, where communication is unrestricted between various family members, regardless of age or position in the family. Most decisions are made together and everyone feels comfortable discussing a wide range of topics, from politics, to sex, to what they had for lunch.

The other family has low conversation orientation, meaning that communication between family members can be restricted. Certain topics are not discussed, parents may not be as open with their children, and frequent communication is not a goal. This family isn't any less loving or affectionate, they just have different cultural values about communication.

There is one sub-set of culture that deserves special mention in terms of family communication. Gender is the set of cultural beliefs regarding the behavior of people of different sexes. In many cultures, gender can be a very strong part of personal identity, and this can impact how families communicate.

Low conversation orientated cultures in particular may build communication restrictions along the lines of gender, encouraging fathers and sons, or mothers and daughters, or nephews and maternal uncles, to engage in more open communication than other sub-groups of the family. The role of gender is also important in terms of conformity, especially when it comes to passing on family traditions, rituals and histories.

Now culture and gender have impacted family communication for about as long as we've had families. There is one major factor however, that is newer on the scene. We could talk about how the Industrial Revolution changed family communication in the 18th century by encouraging educated youth to speak against tradition. Or, we could talk about how transportation advancements in the 19th and 20th centuries changed family communication patterns through the added element of distance. But I think we should focus on the modern world, where digital technology is now the force that is shaking our society. Across the world, youth are being raised by digital technology and communicating via social media, while their parents are still adapting to these new methods of communication.

Many scholars feel that there is a deep generational divide developing that undermines the ability of many families to communicate in traditional ways. The families that seem best prepared are those from low conformity cultures, where the new independence of social media has not drastically changed the expectations of growing up. But in other places, this is a dramatic shift. What will the ultimate result of technological change be on family communication? Only time will tell, but we will be sure to talk about it when it does.

Communication is everywhere. How we communicate defines our relationships, and this is just as true with families as with anything else. Families are often considered the basic social unit within a society, so how we communicate as families says a lot about our societies. Communication reflects important things about our lives, such as culture. Cultural values can influence communication orientation, or the degree of interaction between family members, as well as conformity orientation, or the degree of conformity within a family. Both of these define the limitations of communication within the family.

Cultural values also impact our ideas about gender, and in many societies, this is one of the fundamental distinctions in terms of how families communicate.

In the modern world, technology is also playing a larger role in family communication, undermining traditional values of many cultures by encouraging independence outside of the family and creating generational divisions. This can cause a lot of stress on a society. Why? Because social rules, communication beliefs, all of it, it really is, all in the family.

What Is a Non-Traditional Family? - Definition of Options