Dr Trista has a PhD in Biochemistry and loves to teach college biology and chemistry.

Inhibitors are used to modify chemical reactions. Discover the definition of inhibitor, the different types, and the helpful effect of using chemical inhibitors. Updated: 09/13/2021
Create an account

A chemical inhibitor is a reactant or process that slows or halts a chemical reaction. In order to understand this, imagine a chemical reaction is like driving a car. You start driving at 'reactants' and continue on to your destination, or 'products'. While driving, you press the accelerator to go faster, and you apply the brake to slow down. To inhibit means to prevent or slow down and in our car analogy, the brakes are a vehicle inhibitor. In chemistry, inhibitors are molecules that slow down or stop a chemical reaction from taking place. 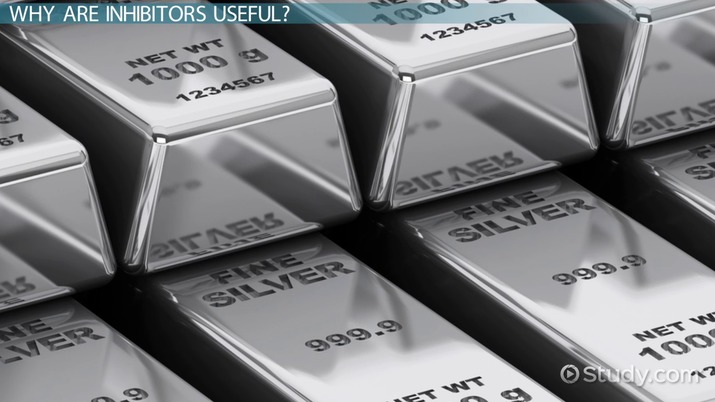 Coming up next: What is Sucrose? - Function, Structure & Chemical Equation

Why Are Inhibitors Useful?

Chemical inhibitors are useful for a number of reasons. For one thing, reaction products often go on to create an undesired new substance in a side reaction. Think of it like driving your car off a mountain road. This doesn't result in reaching your destination or product. In addition, some reactions put out lots of heat and extra heat may cause safety hazards, your car's engine may catch fire, or increase the likelihood of unwanted side reactions, such as a car crash. Inhibitors also prevent chemical damage or decay in finished products. An anti-rust coating on your car is a good example of this.

In polymer chemistry, reaction inhibitors are used to modify the properties of the final polymer product as well as to prolong usefulness. Did you know that the polyethylene used to make milk jugs as well as plastic bags is made from the same reactants? Longer polymer chains form into strong thin films. If you bubble oxygen gas through the reaction vessel, a thicker, softer plastic is formed. Plasticizers and crosslinkers are other classes of compounds added to a polymer chemistry reaction to alter how flexible or rigid the final product will be.

As another example, silver metal is very reactive, so silver jewelry is often coated with rhodium metal or a clear polymer to prevent the formation of dark colored silver sulfides, which is often referred to as tarnish. The polymer coating is an inhibitor.

There are many different types of chemical inhibitors. Some of the more common types include corrosion inhibitors, reversible and irreversible enzyme inhibitors, microbial inhibitors and preservatives, and UV stabilizers.

Corrosion inhibitors specifically prevent acid or oxidation damage to metals or metal alloys. These are vitally important in industrial chemical processes, where large amounts of acids may be created as part of a reaction. Usually, corrosion inhibitors are applied to a surface to prevent that surface from being damaged.

Antibacterial compounds act as microbial inhibitors. Triclosan is a compound added to soaps that kills bacteria by interfering with the process to build their outer cell membranes. Household bleach causes critical bacterial proteins to stick together irreversibly, inhibiting bacterial growth.

A subclass of microbial inhibitors are preservatives. Preservatives are typically molecules that slow oxidation or spoilage in foods, beverages, creams, lotions, and cosmetics without killing bacteria or yeast. An example is potassium sorbate, which is typically added to fruit juices to prevent yeast growth and unwanted or excess fermentation.

UV stabilizers, such as benzophenones, are another type of commonly used inhibitors. These absorb ultraviolet radiation from the sun. Prolonged exposure to UV radiation may excite an electron such that it leaves its parent compound and acts as a free radical. Free radicals attach themselves at random to whatever molecule is close by, often breaking it apart. The damage results in pigments and dyes fading, polymers breaking, and cellular damage in living creatures. Sunscreens have a mixture of compounds that absorb and reflect UV light from the skin.

Endotoxin Overview & Examples | What is an Endotoxin?