Simona received her PhD in Applied Mathematics in 2010 and is a college professor teaching undergraduate mathematics courses.

View bio
In this lesson, you'lll learn about how the initial value of calculus is related to the integration process. You will see how crucial having an initial condition is and how useful it is in solving your problems. Updated: 04/22/2020
Create an account

What Is Initial Value? 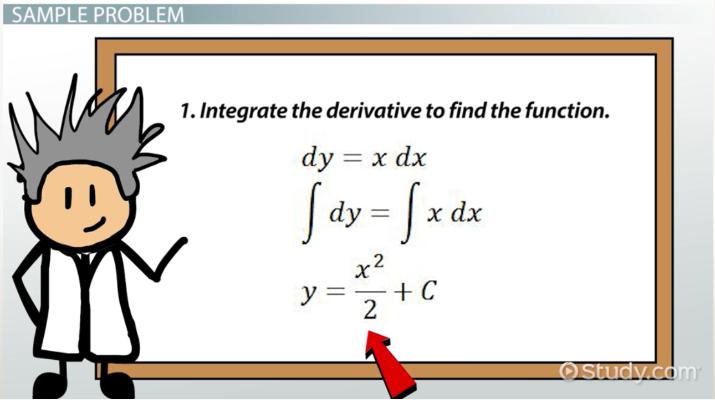 The Constant of Integration

When you calculate the indefinite integral, you end up with something called the constant of integration. It looks like this when you write it out.

Because you have this unknown constant, you need a known point to plug into your equation to figure it out. This known point is your initial condition.

The method to solving initial value problems requires just a couple of steps:

Let's see how these two steps play out with a sample problem.

Our first step tells us to integrate, or take the antiderivative of the derivative. To do that, we need to move the dx over to the other side. So, let's integrate both sides.

We have combined the constant of integration from both sides into just the one because they are both constants and are therefore, like terms. They'll be combined later. Our answer isn't complete without knowing this constant. So, let's go onto step two.

Our constant of integration is a 2. Now we can plug this information into our integration result to get our full answer.

Wow! We are done. That wasn't so bad. Just two steps to solve this type of problem!

Initial Value when Acceleration Function if Given

If the acceleration is given as a(t) , then

When we integrate the acceleration function, we obtain a velocity function that contains a constant of integration, which is determined by using the velocity at a given point in time.

Integrating the velocity function, we obtain a position function that contains a constant of integration, which is determined uniquely by knowing the position's initial value.

Find the velocity and position functions of a particle whose acceleration is a(t)=6t if the particle starts from rest and initially the position is 2 m from the origin.

because the particle starts from rest, v(0)=0 and position is

What is Annuity? - Definition & Formula

Determine the Initial Value of a Function

Work as an Integral

The Chain Rule for Partial Derivatives

Finding the Integral of csc(x)

Dissolution and Termination of a Partnership