The Golden Age of Chinese culture saw several innovations during the reigns of the Sui, Tang, and Song dynasties. Explore these dynasties and how they each contributed to China's development between the 7th and 13th centuries, until the invasion of the Mongols. Updated: 11/03/2021
Create an account

Following the breakup of the Han Dynasty during the third century AD, China would again enter a period of upheaval. While the Jin Dynasty was briefly able to restore rule, it soon fell into a period of political chaos, known as the Southern and Northern Dynasties. Finally, by 589, a dynasty emerged that was able to once again unite all of China. The Sui Dynasty would be the first of three dynasties that would rule the Middle Kingdom during a Golden Age of Chinese culture, and create many of the innovations that stick out in the consciousness of China. 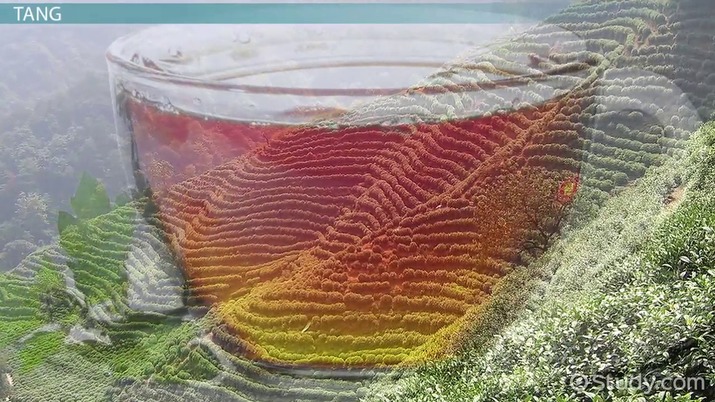 Coming up next: The Mongol Empire & Dynasty in China

The Sui first united China in 589, and almost immediately went to work correcting the problems associated with decades of disunity. In this regard, historians often compare the Sui Dynasty to the Qin Dynasty that ruled more than 800 years prior. In fact, one of the first goals of the Sui was to renovate the most enduring monument of the Qin Dynasty, the Great Wall of China. Additionally, the Sui fought to expand China, incorporating what is now Xinjiang and Vietnam into the new empire. Most notably, the Sui built the Grand Canal, which allowed rice shipments from south China to reach the drought-prone population centers of the north. This cemented rice's place in the cuisine of all Chinese people, as before this northern China had been focused heavily on wheat. Like the Qin before them, the Sui were great builders.

Unfortunately, for the Sui, that is not where the comparisons with the Qin end. Also like the Qin, it seemed that the Sui would stop at little to make their plans come alive. Fixing the Great Wall was a great feat, but came at the same price in lives as before, with more than one million men dying in its renovation. Additionally, the new conquests of Vietnam and Xinjiang had left the army exhausted and broken. It revolted against the Sui in 618 AD.

One of the leaders that revolted against the Sui would go on to found the Tang Dynasty, which lasted almost 300 years until 907 AD. Under the Tang, China would reach a highpoint unseen since the Han period. The Tang were not unaware of their similarities with the Han, and indeed, tried to emulate the earlier dynasty to a great degree, including making the old Han capital of Chang'an the Tang capital as well. Under the Tang, Chang'an became one of the most important cities in the world, with well over 1.5 million residents.

Yet it wasn't just a few big cities that made the Tang one of the most important Chinese dynasties. This was also a period of great innovation in China. For the first time ever, and at about the same time as in Korea, moveable type printing was invented. This innovation allowed the Tang to produce texts on a massive scale. However, the most enduring aspect of Tang culture can be found in cupboards around the world. For the first time, tea became an important crop for the Chinese. Starting off as a medicine, it soon became the drink of choice for millions throughout Asia before spreading around the world. The Tang cultivated it to a great degree.

Finally, of note is the fact that the Tang had, to date, China's only woman ruler. The concubine of two earlier emperors, Wu Zetian had herself declared empress, and later emperor in her own right, through use of the same term as every other Chinese emperor, even declaring herself to be the founder of a new Zhou Dynasty. Not surprisingly, she was heavily opposed to Confucian ideals about women being subservient to men, and pressed to limit the influence of that philosophy both in her court and in China as a whole. Instead, she opted for Buddhism. However, the powerful Confucian bureaucracy blocked her attempts, and soon she was removed from power and the Tang was restored.

Following the Tang, a number of dynasties quickly rose and fell in China until the establishment of the Song Dynasty in 960. This dynasty would rule until 1271, when the Mongols completed their conquest of China. If the Tang Dynasty represented a highpoint of Chinese political power, then the Song represented a high point of culture. That is not to say that there were not administrative innovations during this period - paper money was introduced during the Song Dynasty, as was the idea of letters of credit, an important precursor for banking. Also, the bureaucracy reached new levels of intricateness. Local administrators could now follow different paths dependent on their skill set and were not allowed to return home if accepted into the Imperial Administration in order to keep them from granting favors to old friends. That Imperial Administration was itself getting more and more efficient, even going as far as to begin breeding for the best strains of rice and researching methods to make crop yields higher.

But it was merchants who held much of the real power and wealth during the Song period, and like later merchants in Renaissance Italy, they were eager to engage in conspicuous consumption. Patronages for the best artists and poets were awarded, and Chinese watercolors from this period are still prized possessions. Also, some of China's most celebrated poets composed during the Song period, capturing themes of the beauty of nature, unrequited love, Imperial service, and perhaps having a little too much to drink. One poet, Li Bo, is rumored to have drunkenly fallen into a river and drowned while trying to capture the moon's reflection, which whether true or not, accurately captures the romanticism of this period.

This lesson examined the development of China under the Sui, Tang, and Song Dynasties. We discussed the reestablishment of central rule under the Sui, as well as its rebuilding of the Great Wall and construction of the Grand Canal. We also presented the Tang's legacy as Chinese political power at its best, alongside the cultivation of China's most famous crop, tea. Also, the reign of Empress Wu Zetian is still unique in Chinese history. Finally, we explored the Song both as an administrative and cultural power.