Is sending a juvenile to prison always the best idea? This lesson will look at the different types of correctional facilities designed for juveniles and explore how the juvenile justice system became separate from the adult system.
Create an account

Prior to the 20th century, there was one justice system for adults and juveniles and few differences in terms of sentencing, punishment, and treatment options. When delinquency rates began to rise over time, research was conducted on the effects the system had on the future success of juveniles. One major finding was that when sentenced as juveniles, offenders received a criminal record. This caused further problems for the individuals as adults, including difficulty finding employment and securing student aid, thus making it harder to succeed in life. 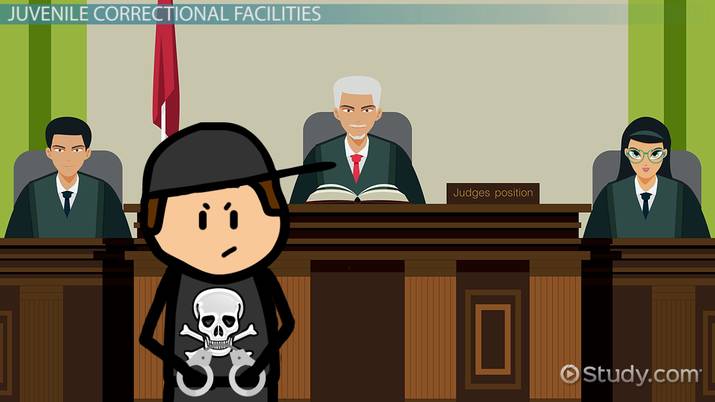 Coming up next: What Is Probation? - Definition, Rules & Types

Once arrested and processed through the court, juveniles who are at risk for running or are a threat to society are sent to detention facilities. Detention facilities hold the largest portion of juvenile delinquents. They're intended to be temporary and focus on keeping juveniles out of trouble and available to the court when their trial dates arrive. Once the court has proceeded with their cases, they're either committed to a private or public facility or released.

As previously mentioned, the juvenile justice system was designed to focus on rehabilitation rather than punishment. Rehabilitation is achieved through treatment services available at both public and private facilities. Based on a national survey, nearly all facilities reported that every juvenile participated in at least one type of treatment program, including behavior management, family therapy, education, life skills, mental health, reentry services, substance abuse, or vocational options.

All juveniles have the right to be provided with the services needed to aid in their rehabilitation. They also have the right to decline any form of treatment. It is common to see court-ordered treatment, which means the juvenile must complete whatever treatment program the court recommends in order to meet the conditions associated with the case. A juvenile still has the right to decline treatment. However, he or she is made aware that this may change how the court proceeds with his or her case.

When juveniles are participating in mental health, substance abuse, or any other form of treatment, it is not uncommon to see them withhold information that is imperative to their treatment, such as information about their childhoods, criminal histories, or current offenses. Some juveniles fear that if they share information with a counselor, that they have not previously shared with an attorney, probation, officer, or the courts, they could potentially self-incriminate themselves. Withholding information that should be shared with a counselor can keep them from getting the best services. As a result, there are laws and policies that protect juveniles and prevent the courts from using what they have said in treatment against them.

Females make up a very small percentage of juvenile delinquents. Statistics have shown that they're less likely to be arrested, charged with an offense, and committed to a long-term facility. Females who do get committed have the same options as males in terms of private and public facilities. However, females are more likely to be placed into a private, residential facility. Regarding treatment services, an estimated less than 10% of programs are designed to meet the needs of females.

The juvenile justice system was developed at the start of the 20th century. Instead of punishment, it focused on rehabilitation and restitution. Detention facilities are public or private establishments used to house juvenile delinquents who are a threat to society or a danger of running. When courts decide to place juveniles into a treatment program, behavioral, educational, family, mental health, substance abuse, or vocational services can take place in a private or public facility. Some are temporary and non-secure, whereas others are long-term and secure. Court-ordered treatment options are common, where a juvenile must complete whatever treatment program the court recommends. Females make up a very small percentage of juvenile delinquents and are more likely to be placed into a private residential facility.

All of the following are examples of provided treatment options in correctional facilities except _____.