While rock music has a mixture of sounds, the instrumentation used is similar among musicians and bands. Learn about the wide range of rock music, the importance of the rhythm section, and the various types of instruments used by bands from the Beatles to Metallica. Updated: 10/29/2021
Create an account

A Wide Range of Rock

Rock 'n' roll has evolved tremendously in the last sixty years. Think of the difference between those early rock pioneers, Chuck Berry for example, and acts that are currently touring like Avenged Sevenfold or The Red Hot Chili Peppers. Consider the difference between classic bands like The Beatles and Queen. There's a wide gulf between the country-influenced harmonies of Creedence Clearwater Revival and the crunching chords of Metallica, yet they all have a place under the umbrella term rock music. So many sounds exist in rock, but there's a standard set of instruments that make up the majority of rock bands: guitar, bass, drums, and vocals. 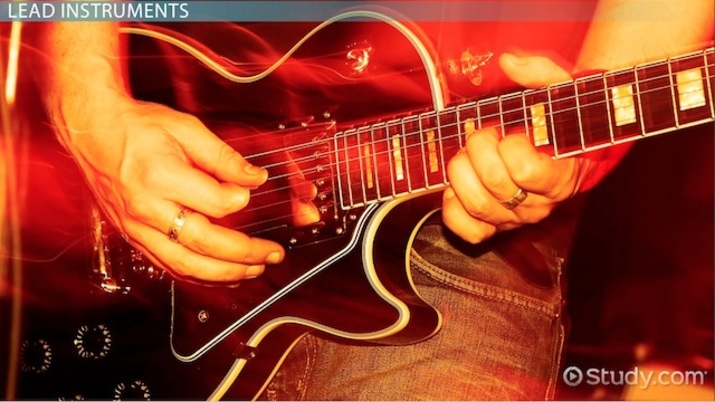 Coming up next: Early Types of Rock Music

Rock music relies heavily on the rhythm section to create the beat that propels the song. The typical rock rhythm section consists of drums, bass guitar, and a rhythm guitar. The focus of the rhythm section is to drive the song and keep a steady tempo so the lead instruments and vocals can play the melody.

The drummer typically sits at the back of the band and plays a drum kit, a collection of drums of various sizes along with cymbals and other percussion instruments. Some drummers use a kit with only a few drums, like Ringo Starr of The Beatles, who typically used four to five drums and three cymbals in his kit. Other rock drummers play surrounded by drums, cymbals, chimes, and even more exotic percussion, like a Chinese gong. Neil Peart, the drummer for Rush, was well known for his extensive kit that included over thirty pieces, both acoustic and electronic. While there was a brief shift towards electronic drums in the 80s, most rock bands now use some variation on a traditional drum kit.

Rock bands normally have an electric bass, which looks like a larger guitar with thicker strings. Most basses have four strings, but some players use five or six string bass guitars. Some rock 'n' roll genres, such as rockabilly, feature upright acoustic basses, like those found in orchestras, but a rock bass is typically played by plucking or slapping the strings rather than by using a bow. The bass player's role is to provide the low sounds, what musicians call the bottom end. While the bass is almost always a rhythm instrument, some bass players grab the spotlight and solo. Cliff Burton, the original bass player for Metallica, rocked a few long solos and played his instrument with his fingers rather than using a pick. In contrast, bass players like Flea, from the Red Hot Chili Peppers, or Les Claypool from Primus, use a slap technique that involves hitting the low strings with the side of the thumb and pulling the higher two strings to create notes that pop.

Rhythm guitar is often played on a six string electric guitar, but some musicians use acoustic guitars as well. The rhythm guitar player strums a series of chords, which are groups of notes that work well together. He or she works with the drummer and bass player to set the rhythm and tempo, or speed for the song. Joan Jett may be known as a singer, but her rhythm guitar work is widely held to be among the best in the history of rock. It's her catchy guitar riffs that make her songs memorable.

Lead instruments are those that create a song's melody. A melody is just a string of notes that is often memorable, catchy, or pleasant to the ear. The lead guitarist will play the melody line, and this guitar player may also take a solo, a rehearsed or improvised series of notes. While some rock bands have designated rhythm and lead guitar players, other bands let the musicians switch roles. In bands with a single guitar player, this musician will mostly play rhythm, with some time in each song devoted to playing the melody and soloing. Rock pioneer Chuck Berry is often cited as one of the first to bring the guitar to the forefront in a rock band, but Jimi Hendrix is considered by many to hold the title of rock's greatest lead guitar player.

There are rock bands that only make instrumental music, but most have a singer. Vocals are a lead instrument, but they can also function as part of the background. It's not uncommon for singers to have backup vocalists on stage who accentuate and harmonize with the lead singer. Some groups use a dedicated singer, while others require one of the members to perform double duty and sing while playing an instrument. Mick Jagger, from the Rolling Stones, is an example of one of the most well known rock vocalists.

Electronic keyboards, electric organs, and pianos are also common instruments in rock bands. Early rock pioneer Jerry Lee Lewis, who is best known for his song 'Great Balls of Fire', led his band on piano, and modern rockers like Ben Folds have continued that tradition. Ray Manzarek of The Doors gave the band their signature sound with his lead and rhythm work on the Vox Continental electric organ.

Often bands will incorporate other instruments in their line-up. In the early days of rock, the saxophone was a common choice, and the sax player sometimes performed a role similar to the lead guitar in contemporary bands. Trumpets and trombones have seen a resurgence in popularity, especially in parts of the country that have a strong jazz influence. Some groups even employ a full orchestral string section of the type normally associated with classical music.

Part of the reason that rock music has so many sounds is that many musicians try to find new avenues for expression by incorporating new instruments or playing techniques. A recent trend in rock is utilizing a sampler to create sound loops. A musician plays for a few seconds and the sampler records and plays those sounds back to allow a single guitar player, for instance, to do both the rhythm and lead parts in a song.

Rock 'n' roll comes in an amazingly wide variety of sounds, but most rock bands follow a standard pattern in terms of instrumentation. They have a rhythm section usually made of a rhythm guitar, an electric bass, and a drum kit. The lead instruments are most commonly the lead guitar and vocals. Rock bands can incorporate keyboards, horns, strings, and electronic instruments to build their own unique approach to the genre.

What Instruments Are in a Jazz Band?

What is Funk Music? - Definition & Characteristics

Orchestra Sections & Layout | What is an Orchestra?