Joseph received his Doctorate from UMUC in Management. He retired from the Army after 23 years of service, working in intelligence, behavioral health, and entertainment.

How many of us have applied to jobs and were asked to take a pre-test with the application? Or who hasn't taken a Myers-Briggs test to determine if he or she is extroverted or introverted? These exams are used to help employers hire a certain type of employee and to better understand their existing employees. These tests fall into two categories: intelligence tests and personality tests.

Intelligence tests are conducted to determine employee intelligence, learning style, and ability to learn. Personality tests focus on whether employees work better in groups or individually, if they learn visually or verbally, and if they would do better in training positions versus management. Both types of tests have many different formulations created by managers and psychologists, all with the goal of finding key employees for specific environments. 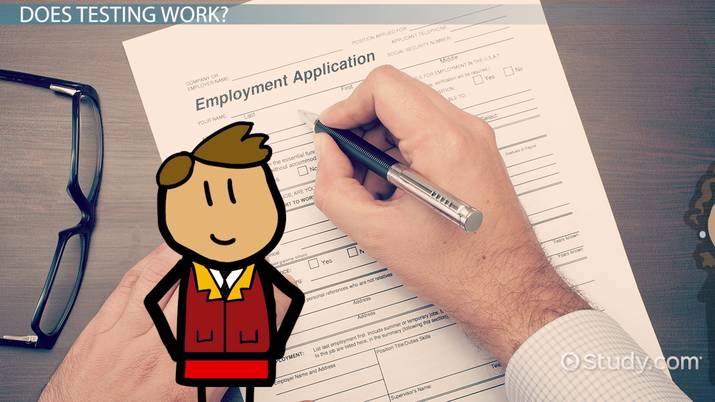 Coming up next: Polygraphs & the Workplace

Although there are dozens of different personality and intelligence tests, we'll only cover the most popular.

Let's start with intelligence tests, which can no longer be used in the hiring process but can still be used after individuals have been hired.

Let's now take a look at the most widely-used personality tests, including the Myers-Briggs, Caliper, and Gallup StrengthsFinder tests.

Many companies use a variety or combination of personality and intelligence tests on their potential and current employees. Although these tests can help employers assess personality traits, learning capabilities, and skills, using them may also create issues. The following are some concerns to keep in mind:

Let's recap. Intelligence tests and personality tests are used by many employers to find just the right employee for a business. These tests can help determine intelligence, learning capability, learning style, skill strength, and even negative traits. Tests like the Caliper test, the Myers-Briggs test, and the Gallup StrengthsFinder test have been used in office environments for years. However, it's important to remember that these tests can be inaccurate and can pigeonhole employees in a negative way. These tests can also be used to positive effect, because employees can then be moved into departments that fit their skills and aptitudes in the best way.

What is Economics? - Definition & Principles

What Is a 360 Degree Appraisal? - Definition & Examples

What is Organizational Culture? - Definition & Characteristics

The Structure and Function of Neurons

What is an External Environment in Business? - Definition, Types & Factors