Alfred Binet wasn't like other psychologists. At the beginning of the 20th century, most psychologists spent their time studying people who were different from the norm. They were interested in what made people act, feel, or think in unusual ways. But Binet was interested in what was normal. How do people even begin to define normal? Specifically, Binet wanted to know about mental capacity. What made some people smart, others normal, and others, well, not the sharpest tool in the shed?

Binet realized that some people were seen as smart because they could quote Shakespeare or understand the laws of physics. But he also realized that, at least in part, these skills were a result of a person's education. 'Is there a way to measure how smart a person is, regardless of their education?' he wondered.

In order to test how smart a normal person was, and to help French officials figure out which students were in danger of falling behind in school, Binet developed a test that asked children to perform logical tasks. They might be asked to put things in order or identify a pattern. Whether the child had gone to the most exclusive prep school or not to any school at all, Binet believed that the child would perform the same on his test.

What Binet was measuring was the potential of children; that is, his test was designed to measure how well a child might do in school or in the workforce based on their innate ability. This innate ability is called Intelligence Quotient, or IQ for short. IQ is reported as a number on a scale. 100 is average for a person's age. For example, if an 8-year-old has an IQ of 100, it means that he is able to do the tasks on Binet's test that most 8-year-olds can do. If, however, his IQ is 110, he is above average for his age.

In theory, a person's IQ stays the same throughout his or her life. This is because there are different tests for different ages. An 8-year-old taking an IQ test will be scored according to the average 8-year-old. When that child is 10 years old, though, if he gets the same questions right and wrong, he'll be scored lower because a child of 10 is expected to be more proficient than an 8-year-old. In other words, the IQ scale changes at different ages, but 100 is always the average score for people your age. 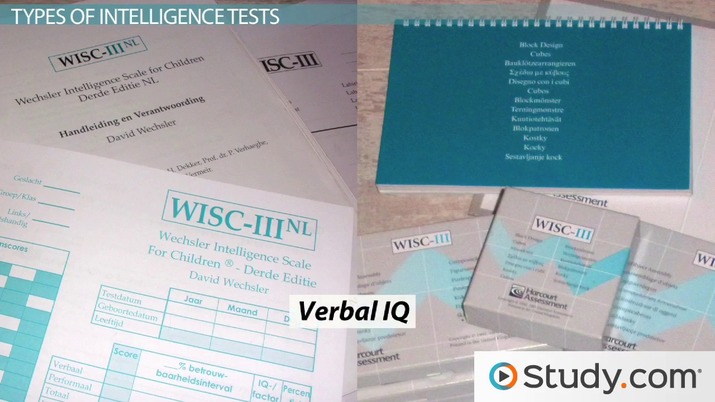 Coming up next: Issues in Psychological Assessment: Reliability, Validity, and Bias

In the middle of the 20th century, psychologist Lewis Terman of Stanford University adapted Binet's IQ test to be used in America. The result was the Stanford-Binet Intelligence Test, which is an IQ test that is still widely used today. Like Binet's original French test, the Stanford-Binet asks the test-taker to solve mental puzzles that are designed to compute their IQ, with 100 representing the average intelligence of any given age.

Despite the success of Binet's tests, psychologist David Wechsler didn't like the way they measured intelligence. Even though they were meant to test intelligence regardless of educational background, Wechsler noticed that to do well on the Stanford-Binet, a person had to have a good grasp of language. What if someone had a reading disability or just wasn't all that great with words?

In reaction, Wechsler developed two tests - one for adults and one for children - that measured intelligence in two different ways. The first part of the Wechsler intelligence scales was much like the Stanford-Binet. The score that a person gets on that part is called a verbal IQ, and it is often very close to a person's Stanford-Binet IQ. But the second part of Wechsler's tests involves tasks that don't require people to be good with words. These sometimes involve seeing patterns in pictures, instead of in words, for example. This second part of the Wechsler tests yields a performance IQ, which might be very different from your verbal IQ.

Intelligence testing is a great concept and is more widely used than you might think. From getting into college to getting a promotion, intelligence tests can touch many parts of a person's life. But does it really predict a person's likelihood of success?

Some psychologists believe that the idea of intelligence as defined by IQ tests is too narrow. Psychologist Howard Gardner has argued for years that there is not one intelligence, but many. Someone who might not be successful in school because they do not have the type of intelligence measured by Binet and Wechsler may be a genius at playing violin or at navigating complex social interactions.

To them, IQ tests should be seen as measuring only scholastic aptitude and should not be seen as a 'be all, end all' of a person's aptitudes. Trying to add in measures for other aptitudes into an IQ test, they argue, leads to a test that does not accurately measure any aptitude. Whether intelligence tests accurately measure a person's intelligence, and despite how you define intelligence, they are still widely used by psychologists to find where people's strengths and weaknesses lie.

Starting in the beginning of the 20th century, intelligence tests began measuring innate intellectual ability, called Intelligence Quotient or IQ for short. There are many types of IQ tests, including the famous Stanford-Binet Test, as well as two tests developed by David Wechsler to measure IQ in non-verbal ways, as well as verbal ways. But there are some questions about IQ tests. Specifically, some people, like Howard Gardner, argue that there are multiple intelligences, while others believe that intelligence is specifically scholastic aptitude and that other aptitudes should be measured in different ways.

Finishing this lesson should prepare you to:

What are Delusional Disorders?

What is IQ? - Tests & Definition

How to Write a Research Paper