Treaties are formal agreements between independent governments, and Article II of the U.S. Constitution addresses the use of treaties explicitly. Explore the details in Article II, the meanings of bilateral and multilateral treaties, and the implications of treaties in international affairs. Updated: 09/28/2021
Create an account

In order to facilitate international relations, governments often form legally binding agreements with one another. These agreements are most commonly known as treaties but can be called conventions, pacts, or accords. A treaty is a formally concluded and ratified agreement between independent governments. Treaties are written agreements that must be ratified, or approved, by all parties to the treaty.

Treaties are an exchange of promises made between independent states, international organizations, or countries. Once ratified, the treaty becomes international law and is legally enforceable against all parties to the treaty. In the United States, our Constitution's Supremacy Clause tells us that, 'All Treaties made, or which shall be made, under the Authority of the United States, shall be the supreme Law of the Land.' This means that ratified treaties become a superior part of our federal law system. Only the U.S. Constitution ranks as higher law. 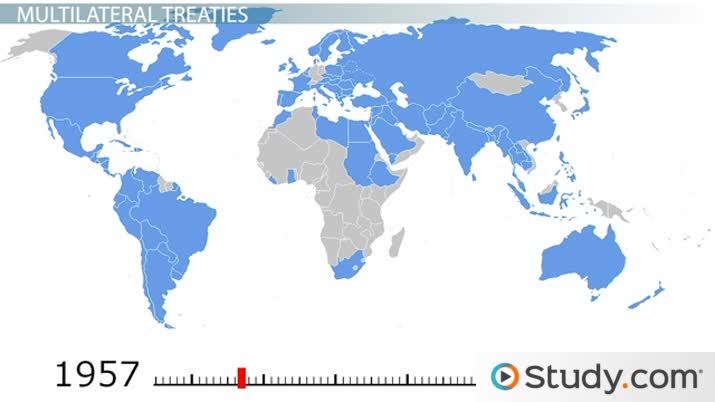 Coming up next: Sovereign Immunity: Definition, Act and Waivers

Treaties are also addressed in other portions of the U.S. Constitution. Article II authorizes our president to make treaties with other countries. The president uses treaties in order to conduct foreign business and policy, such as through peace or trade agreements. Note, though, that our president isn't authorized to act alone. Many officials are involved in the treaty-making process.

First, officials with the Department of State must negotiate the treaty with the other government. Next, the draft treaty is sent to the U.S. Senate for a process called 'advice and consent.' The Senate must consider the draft treaty and approve the treaty by a two-thirds vote. The president must then execute, or sign, the treaty. The treaty isn't officially ratified, or enforceable, until all parties to the treaty have signed. There are a couple of different types of treaties. Let's take a look at the two main types of treaties.

Bilateral treaties are usually made between two nations but can also be made between one nation and a bloc of nations. For example, China has a current trade agreement with the Association of Southeast Asian Nations, or ASEAN. ASEAN is a bloc consisting of 10 separate Southeast Asian countries.

Sometimes treaties are made between many independent parties. Treaties between more than two independent governments are known as multilateral treaties. For example, the North American Free Trade Agreement, or NAFTA, is a treaty executed in the early 1990s between the United States, Canada, and Mexico. This treaty addresses several important international business topics. The main goal of NAFTA was to eliminate barriers to trade, such as tariffs, between the treaty nations.

Also consider the UN Charter, which established the United Nations just after World War II. The United Nations is an international organization of countries that facilitates human rights through the promotion of peace, health, and security. This treaty was made between 51 original member countries, though the United Nations currently includes 193 countries.

Let's review. Article II of the U.S. Constitution grants the president with the authority to make treaties on behalf of the U.S. A treaty is a formally concluded and ratified agreement between independent governments. It's a written agreement that must be approved by all parties to the treaty before it's considered to be legally binding against those parties.

Treaties and the Law: Definition & Examples