Janell has an MBA, a Master's in Education, and a BS in Public Safety Management.

View bio
Interrogation is a process where law enforcement agents try to obtain information about a case by asking questions to people relevant to the case. Explore the definition and types of interrogation used by law enforcement officers, and examine a variety of different interrogation techniques. Updated: 10/15/2021
Create an account

An interrogation , in law enforcement, is when a representative from the agency collects information about a crime by questioning suspects, victims, or witnesses. The ultimate goal of an interrogation is to solve the crime. 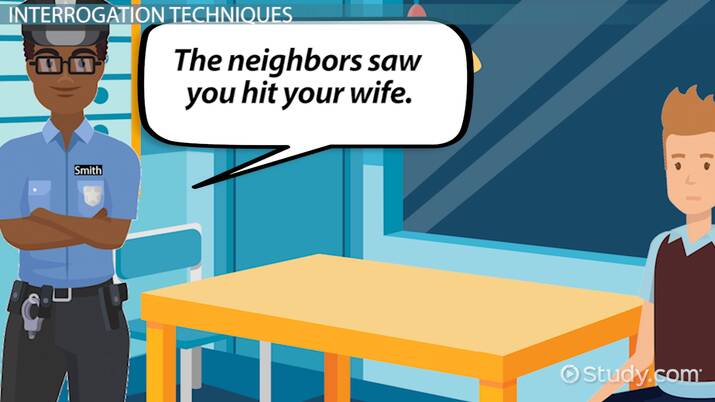 Officer Smith has the option of using different interrogation techniques. The most common technique is known as the Reid technique. The following nine steps are part of this technique.

All the evidence is provided to the suspect with the police officer giving the suspect a chance to confess immediately. Officer Smith tells Dave that the neighbors saw him hit his wife and his wife has bruises on her arms. Officer Smith also shows Dave pictures of the handprint on his wife's face and tells Dave they can match the handprint from the picture to Dave's hand. If this does not work then the officer moves to the next step: dominance.

The law enforcement agent does not let the suspect talk. Since Dave isn't speaking, Officer Smith is able to continue talking without being interrupted. Office Smith offers up different scenarios.

A) Dave didn't hit his wife. He was helping her because she was falling, and he grabbed her to keep her from hitting the ground.

B) Dave was upset and flung his hands and hit her by accident.

C) The domestic violence wasn't an accident, and Dave had a moment of rage and really meant to hit his wife.

Dave is still not speaking. He is not admitting or denying any of the scenarios that Officer Smith has given. Since dominance isn't working, the officer can use deflection.

Officer Smith will now try to give moral justification for why Dave hit his wife. Deflection is also known as ''creating a theme,'' and the theme can change throughout the interview depending on how the suspect answers the questions.

Officer Smith creates a theme using the scenarios in the dominance step. Officer Smith justifies Dave's actions because it is only correct to help his wife who was falling. He also justifies Dave hitting his wife by creating the theme that it was an accident all around. She was either falling or he was flailing his hands and she walked into them.

Officer Smith also uses victim-blaming, saying that Dave was mad so she shouldn't have come close to Dave during this time of rage. She would not have been hit if she just walked away.

Dave finally starts to talk, and he objects to all of the themes. These objections give Officer Smith the opportunity to turn the objections into a justification for the domestic violence.

Dave tells Officer Smith that, ''I don't hit women because it is wrong.'' and ''I am not a violent person so I would not hit anyone.'' Officer Smith takes the objections and justifies the domestic violence. Officer Smith says, ''So you really didn't want to hit your wife, did you?'' and ''You are not violent, but when your wife got in your way, you had to hit her?'' Officer Smith was not able to get Dave to answer either of his justification questions, so he started showing empathy for Dave.

Officer Smith expresses empathy for Dave. He tells Dave he understands what he is going through and that he gets irritated with his own wife. Officer Smith says that if Dave's wife wouldn't have argued with him she would not have been hurt. Dave once again remains silent and chooses not to speak with Officer Smith after he expressed empathy. Officer Smith will move to the next step of the Reid technique and will once again, create alternative themes.

Dave is unresponsive during the empathy step. He doesn't answer Officer Smith's questions, so Officer Smith offers different themes and different scenarios. This time, when creating scenarios, Officer Smith focuses on Dave's duties to society. Officer Smith says, ''Dave, you will not confess because you're afraid you will lose your job and will not be able to see your kids.'' Officer Smith then says, ''You hit your wife to be the man of the house, and you didn't want to lose control over her.'' Dave becomes responsive to the scenario about losing his job and his children. He nods his head at Officer Smith, which is the first admission of guilt. Officer Smith continues on with the questioning by posing alternative questions about Dave's children and job.

Posing an alternative question means Officer Smith will ask Dave about losing his job and children. He will say to Dave, ''You're afraid you will lose your job and that your children will not speak to you if you confess to hitting your wife?'' Dave responds, ''I hit my wife and didn't really mean to. I do not want to lose my children.'' Dave admits his guilt to Officer Smith, and he must now repeat the confession in front of other members of the agency.

This is the final stage of the Reid technique when interrogating a suspect. Documentation includes documenting the date and time the suspect has confessed. The confession is then written and the suspect signs the confession, making it legal. Dave would have to write the confession and sign the statement.

Another technique used to interrogate a suspect is to complete an interview.

Interviewing the suspect is one type of interrogation. Law enforcement agents interview the suspects in a systematic approach. First, they plan and prepare the questions, and then, they engage the suspect and explain why they are there. The third step of the interview is to account for what has happened. The officer puts together the statements from the victim and the witnesses and tells the suspect what he believes happened. The fourth step is to close the interview. The final step is to evaluate the responses given by the suspect.

While Dave was in the cell, Officer Smith could have planned an interview with Dave. Officer Smith would ask pertinent questions about the crime. He would explain to Dave why he was being detained. Then Officer Smith would recount the event as best as possible using the information he obtained from the victim and witnesses.

While Officer Smith is going through each step with Dave, he would document Dave's answers and Dave's body language. He would close the interview and take time to evaluate the answers. He would also ask Dave to clarify any information that he has questions about.

An alternative to interviewing the suspect is verbal aggression. Verbal aggression is just as it sounds. It's intense and can be very uncomfortable for the suspect. Officer Smith would yell at Dave and use verbal force when asking questions. He would repeat the questions a few times, getting closer and louder without touching Dave. The force and negativity Officer Smith uses can be enough to get Dave to confess to the crime.

If there wasn't enough evidence against Dave, Officer Smith could question Dave but would not take him into custody, nor would he read him his Miranda rights. Dave would be asked to voluntarily give a statement and answer questions but isn't obligated to stay and answer questions.

Interrogating a suspect can be a difficult task. Interrogation, in law enforcement, is when a representative from the agency collects information about a crime by questioning suspects, victims, or witnesses.

This lesson taught you about the nature of interrogation as part of the criminal justice process. Take a look at the following activities to explore this important concept in more detail.

Based on what is explained in this lesson, what rights does a detainee have if they are being interrogated? How can they invoke these rights? How can detainees use their legal rights to protect themselves from unlawful interrogation, and what recourse do they have if their rights are not granted? Write a paragraph explaining the answers to these questions in your own words. Imagine that this is advice that you might give to a client if you were a lawyer.

You may have heard about famous cases in which law enforcement officers did not follow legal protocol or bent the rules during interrogations. Compile a list of some of the cases that you can find where you believe that detainee rights were infringed upon during interrogations. Propose legislation or other solutions to these problems that could prevent law enforcement agents from unlawfully harming detainees.

Write a guide proposing your plan for how best to train law enforcement officers to perform legal and ethical interrogations of suspects that respect suspects' constitutional rights. Make sure that your proposal is within legal boundaries and uses previous cases to build upon existing training and legislation.

What is Recidivism? | Causes, Rate & Examples of Criminal Recidivism & How to Reduce Recidivism