Kelly has taught English in five different countries, mostly recently in Dublin, Ireland. She has a master's degree in teaching English as a second language.

Filmmakers often find inspiration in other films, including elements of those films in their work, a type of intertextuality. Explore the characteristics and types of deliberate and latent intertextuality and discover some examples. Updated: 01/12/2022
Create an account

If you are perusing the listings for this summer's big blockbusters, you might come to the conclusion that Hollywood is out of ideas due to the endless onslaught of remakes, reboots, and sequels. You might be surprised to learn that even the most iconic and original films might have borrowed heavily from other source material. This is due, in part, to a little thing called intertextuality.

Intertextuality is the point where two works of art overlap. In terms of film, it's where a movie overlaps with another work of art, whether that be another film, a work of literature, or another art form. Since no art is created in a vacuum, intertextuality occurs throughout most genres of art, not just film. Another way of thinking about intertextuality is the way in which works of art purposely or accidentally connect and intersect. Let's look at a few examples from famous films. 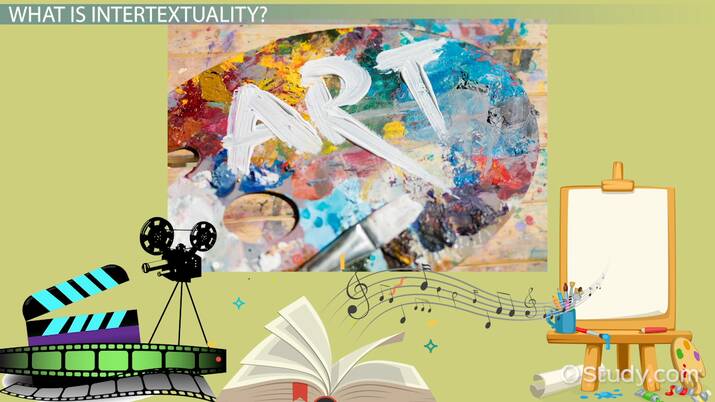 Try it now
Back
Coming up next: Sgraffito Pottery: Definition & Designs

Deliberate intertextuality occurs when an artist intentionally includes and/or makes reference to other art forms. In Jordan Peele's 2017 debut, Get Out, for example, the director uses subtle references to classic horror films to create an ominous atmosphere. For instance, while navigating a subdivision, a character says, ''Man, I feel like I'm in a hedge maze out here,'' referencing the hedge maze in The Shining. In another scene, a villainous character is seen strumming a ukulele, similar to the boy plucking the banjo in Deliverance.

Let's take a closer look at some of the different types of deliberate intertextuality out there.

An allusion is a common form of deliberate intertextuality where an artist refers another work of art directly. Sometimes, allusions come in the form of brief references, like Easter eggs that many directors leave in their movies for sharp-eyed fans. Disney included an Easter egg in its animated feature Moana when the character, Sven, from its film Frozen appeared for a brief, flashing moment.

Deeper, less obvious allusions can be found in other films and are not always references to other movies. Many directors use classic literature as inspiration. Clueless, for instance, is a fun, teen comedy about self-absorbed Cher from Beverly Hills trying to find her friend a boyfriend. Look a little deeper, however, and you'll see its characters and story line are lifted directly from Jane Austen's classic novel Emma.

The Coen Brothers' film, O Brother Where Art Thou, borrowed so heavily from The Odyssey that they even gave Homer a writing credit. Many characters and scenes are heavily based on the ancient Greek epic poem. John Goodman's one-eyed character, ''Big Teague,'' is like the Cyclops, and the beautiful women in the river who seduce the main characters allude to the Sirens in The Odyssey.

This might seem like outright thievery, but it also gives viewers a chance to connect with a classic story in a more contemporary setting. Classic literature like Emma or The Odyssey relies heavily on references meant to appeal to readers of their own time period. Modern readers might miss out on Austen's biting social satire, for instance and see it as a simple romance story; but the satire becomes very clear when played out by Cher and her friends in Clueless.

Pastiche is a deliberate re-creation of the style of another period or another artist. Quentin Tarantino, a director who once said in an interview, ''I steal from every single movie ever made,'' is known for his pastiches of other genres. His Kill Bill film series is a prime example. Uma Thurman's character, ''The Bride,'' gets revenge in a series of elaborate fight scenes, borrowing heavily from the cinematic language of Japanese and Hong Kong cinema in particular. The Bride even wears Bruce Lee's yellow jumpsuit from Game of Death throughout much of the first film.

A close cousin of pastiche is parody, which mimics the style of another work of art or artist for comedic purposes. To a certain extent, the difference between pastiche and parody is the artist's intentions, and the two often overlap. A great example of parody is Shaun of the Dead, the title of which is even a parody of the classic zombie film, Dawn of the Dead. Shaun of the Dead takes lots of classic zombie movie tropes normally meant to terrorize audiences and plays them for laughs. A great example is the scene in which Shaun and his friends sneak through a horde of shambling zombies by shambling in a similar manner.

Another type of artistic overlap or intersection is latent intertextuality, which occurs without the artist's deliberate intention. Returning to Jordan Peele's Get Out as an example, the director has said in many interviews that he is a lifelong horror fan, so it's no mistake that his big screen debut is a horror film. His influences include films as diverse as Jaws and Rosemary's Baby, and while Get Out doesn't contain outright references to these films, they certainly influenced the director's style and storytelling choices.

Okay, that was complex! Let's take a moment to review what we've learned. As we learned, intertextuality is used in film often to create a universal cinematic language and communicate themes and ideas that filmmakers don't necessarily want to convey directly. Intertextuality can be either direct or indirect, with deliberate intertextuality occurring when an artist intentionally includes and/or makes reference to other art forms, and latent intertextuality occurs without the artist's deliberate intention. We also learned that, while there are many types of intertextuality, a few common examples include allusion, or direct reference to another work of art; pastiche, or deliberate imitation of the style of another artist or period of art; and parody, or the mimicking of another style for comedic purposes.

Narrative in Film Types & Examples | What is a Narrative Film?

Subplot Overview & Examples | What is a Subplot?

Narrative in Film Types & Examples | What is a Narrative Film?

Subplot Overview & Examples | What is a Subplot?